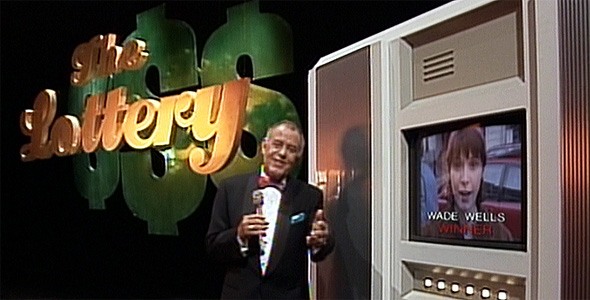 Dispirited with their lack of progress, Wade asks Quinn to give serious consideration to staying on an idyllic world where there is no competition for resources and a bizarre lottery pays out cash just for playing. When Wade wins the Lottery, Quinn grows suspicious and discovers it’s little more than population control — and the winners are executed. Meanwhile, Rembrandt falls head over heels for another Lottery winner and asks the others if they can take her with them when they slide. She betrays him and turns him into the police, earning him a death sentence as well. Quinn and Arturo manage to rescue Rembrandt, and Wade is saved by a dashing young lottery winner named Ryan. The five manage to slide out, but Quinn is shot in the escape. The first season ends with an unconscious Quinn bleeding in Wade’s arms.

The first video cycle to pick the first lottery winner flashes at least 63 faces before coming up with Julianne Murphy, including those of Arturo and Rembrandt. However, it should be noted that upon freeze-frame analysis, it’s evident that some of those faces appear twice. Then again, it should also be noted that the streetscape backgrounds behind many of those faces are very different which takes the time to show that there are Lottery machines all over the city. On the computer’s second pass to pick a winner, it cycles through only 26 faces but nearly all of those are carry-overs from the first cycle. 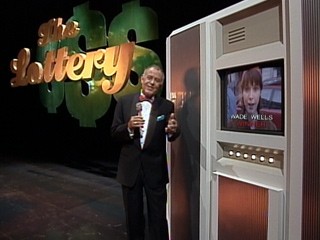 This world is as idyllic as it can possibly get. Low pollution, no crime and no poverty are a result of lower strains on the available natural resources.

How did this come about? In the late 19th century, the Reverend Thomas Malthus argued that the population of the Earth would always increase faster than the food supply, thus creating a class of people mired in poverty. On our Earth, that notion was abandoned because at the time population control was countless wars that decimated much of western Europe and the Americas. Here, Malthus’ ideas were embraced and birth control, widely discouraged by the Catholic church and other mainstream religions, was adopted as a way to lower population.

As a result, the total population of this Earth is approximately 500 million people, and the population of San Francisco is under 100,000 citizens. Cars are for public use, much like the taxi system on our world. Jocelyn Elders, a proponent of safe sex and former Surgeon General on our Earth, is president of the United States here.

There is a lottery in California which dispenses whatever amount of money the person requesting desires. Based on the amount chosen, those entrants face random selection to win the lottery, which provides the winner with White Card privileges and $5 million. The White Card allows you to purchase whatever you want, and the merchant will not deny you. It’s the economy’s way of saying thanks for “making way.”

Making way? Well, if you win the lottery, it’s just another form of population control. After a gala ball, the weekly winners are taken up to their hotel suites where they are administered a powerful drug that kills them. Barbaric? Well, the people here are heavily into the next life, so they cherish being able to make way, as the money they win from the lottery goes to their next of kin.

The penalty for subverting the Lottery system is called “the Process,” and they’ll make you pay in pain before they kill you. That takes place at the Municipal Processing Center. If you subvert the lottery, you will be arrested by the Lottery Commission Police (LCP).

Weiss expresses a preference for the final, cliffhanging episode. “The nice thing about that episode,” he says, “is that it strikes one tone in the first half. They’ve come to a world that is nearly utopia; Wade’s found a nice guy there; and you think that maybe they’ll stay. Then at the halfway point they find out what it’s all about, and the whole show takes a giant left turn, and the whole tone changes. That’s the kind of show we’d like to do more of, because it assumes that the audience is smart.”

The attentive viewer may also note that the arrival on that world refers back to the Pilot, when Quinn Mallory is visited by another Quinn. He makes mention of a world he’d visited “where everyone is happy,” and that he was going to keep sliding until that world was once again found.

Though it may be hard to accept that Quinn Two’s ideal was so terribly flawed, that world was indeed the world he had been seeking. “When we were deciding where we were going to take the series, we thought immediately of the other Quinn’s speech in the pilot, about a utopia,” says Weiss. “We didn’t want just a series of negative worlds. He had also mentioned a world where the Cubs won the pennant three years in a row, but we didn’t think we could get an episode out of that one. So there was that utopian world, but of course we put a spin on it, to create dramatic conflict.”

“… I really liked “Luck of the Draw,” the season finale,” Sabrina says. “Intellectually, it was the most intriguing of all the episodes … [the concept is] something I would like to see more of [in future episodes], plotlines that really make you think.”

At the 5th Annual Environmental Media Awards (October 13, 1995) writer Jon Povill received the Turner Prize and $10,000 for this episode. The Environmental Media Association’s annual awards are presented to productions that help raise the eco-awareness of the American public.