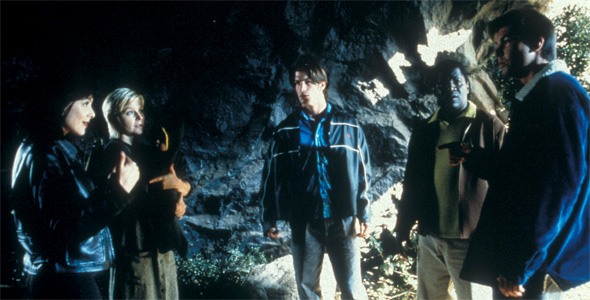 Forty-five minutes left before the slide. Quinn, Colin, Rembrandt and Maggie run through a bombed-out building, trying to evade capture from the Kromaggs. Making their way up a mountainside, the team tries to figure out what kind of Kromagg complex they stumbled upon, but with less than an hour to go, are more concerned with the next window of opportunity.

Meanwhile, at the Kromagg base of operations on this world, a Kromagg commander confirms that a breeder escaped from the compound and is heading up the mountain to evade capture. They are surprised to find that there are four other people in the same vicinity and search parties are dispatched to retrieve the rogue humans.

As Maggie and Quinn make their way down the mountain to make sure there aren’t any Kromaggs following them, they see a woman carrying a pack on her back with a child in it. Meeting up with her, they learn her name is Christina. Quinn introduces himself and is shocked when she says that she was friends with Wade Welles. Together, they walk back to the cave where Rembrandt and Colin are holed up.

At the cave, Christina tells Rembrandt that Wade forgives him for deserting her in the Kromagg camps. She also reveals that her child is a Humagg, a hybrid human-Kromagg that is the result of the breeder camps. Christina says that she hasn’t come up with a name for the child yet, and that he’s 8 months old.

Quinn, Rembrandt and Colin are laughing it up at the mouth of the cave when they hear noises. Heading down the mountain again, they see Kromaggs searching the area. Maggie says that since they are looking for a woman, she’ll take Christina’s place. The Kromaggs take the bait and are ambushed by the Sliders. Quinn forces the Kromagg guard to open up the database to retrieve Wade and Christina’s files. They find Christina’s but not Wade’s, and entering her coordinates into the timer, slide, but not before having a car chase.

Christina is enlightened to be back on her world, which is full of untrusting citizens who loathe the Kromaggs. Martial law is the rule. Making their way to Christina’s house, her father Jonathan is ecstatic to see her… until he sees her Humagg baby. He refuses to accept the child as his grandson and heads out to the garage to fix a chair. Quinn and Rembrandt follow, trying to learn a little about the weapon that killed the Kromaggs. Only after some intense discussion does Jonathan reveal that Christina will need their support in a couple hours.

Upstairs, Maggie and Christina goo-goo to the child. Maggie admits that she wishes she had a kid, and goes to talk to Quinn while Christina puts the child to sleep. They hug, they give each other pecks on the cheek, they talk… it’s all very cozy until Christina calls Maggie into the room because the baby is dying. They grab the child and are taking him to the doctor when Jonathan stops her and tells Christina it won’t matter, since the illness affecting the child is an anti-Kromagg virus in the air.

It’s around this time that the Kromagg subcommander that fathered the child arrives, wearing an environmentally shielded suit and demanding the return of his child. Maggie pulls a gun, and when the Kromagg offers a truce, they lower their weapons. He asks if there is a cure for the child’s sickness, and Jonathan says there is. Using Kromagg mind control techniques, he wrests the information from Jonathan. Quinn and Maggie agree to accompany the Kromagg to the military complex where the antidote is secured. Using his mind control techniques, the Kromagg makes the military believe that he is Jonathan, and that Quinn and Maggie are Air Force officials in from Washington, D.C.

Back at the house, the Kromagg administers the antidote to his child, pocketing some for himself. He then pulls out a gun that was obscured and begins to exit the house with the baby. The Sliders, Christina and Jonathan follow, and Jonathan charges at the Kromagg, taking several of those pellets Rembrandt got hit with in The Dying Fields, but giving the rest of them the chance to subdue the Kromagg. Both Jonathan and the Kromagg die, and Christina slides with the Sliders to the next world, since she has nothing left on this one. Christina also has a name for her child: Jonathan.

Kromagg Outpost 117 is a fully functional breeding facility. Established over a decade ago to replenish the lines of combat that continued to shrink from the virus, Outpost 117 artificially inseminates human women captured from parallel earths and then keeps the children with the mothers until 9 months of age. Women are kept no longer than 19 months on Outpost 117. After their stay, they are shipped to another facility, either another breeding camp or a slave labor complex. Women who are subversive or who are barren may be tortured, shot and even murdered.

Former Kromagg Outpost 66 is one of a handful of parallel worlds where the Kromagg occupation has ended. Only recently, the United States government created a toxic virus that, when release airborne, choked the Kromaggs to death. The Dynasty pulled out six months ago, and under Dynasty Directive travel to Outpost 66 is punishable under pain of death. The Kromaggs did a lot of damage to this world before leaving, however. Moscow, Paris and New York are piles of rubble.

While some may argue — incorrectly — that the episode is an excuse by a power hungry television executive to play power games, I will argue that this particular episode is an example of dynamic and challenging story writing which explores the depth of Kromagg love.