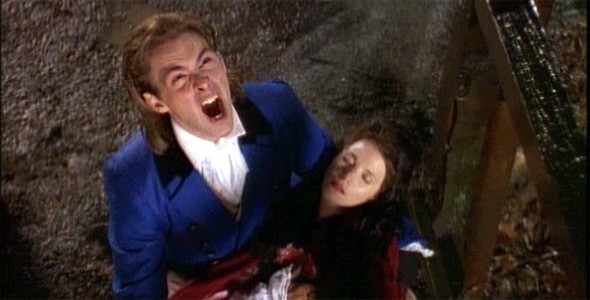 Wade’s been having strange dreams about a mysterious man, a man who is waiting for them after the slide. His name is Bond, Derek Bond, and he claims to be a seer. He tells Wade they are destined to be together. Quinn isn’t buying any of it, but there is serious evidence this world has tapped into psychic powers. The person responsible for foreseeing the future is the Prime Oracle, a job Derek is next in line for. The Prime Oracle attempts to run Wade over with his car, and Arturo and Rembrandt are taken downtown for murdering her in a pre-emptive arrest. Wade agrees to see Derek, but the relationship turns ugly when he refuses to let her go. The others are powerless to rescue her as he can foresee their every move and with the Prime Oracle dead, Derek has ultimate authority. There’s only one way out for Wade — the final way out.

On Friday afternoon, the Prime Oracle says that by this time tomorrow (Saturday) he will die of a cerebral hemorrhage. Well, the Prime Oracle was wrong! Here’s the reasoning: at the beginning, Derek says he’ll pick up Wade at 7 p.m. that day for their date. Later, at the restaurant, Wade can’t believe it’s so empty for a Friday night. During that same date, the death of the Prime Oracle is announced. So the Prime Oracle died on Friday night just hours after saying that he would die on Saturday. What does this say about the Oracle’s prediction ability?

In 1865, a young San Francisco psychic had a vision of President Abraham Lincoln’s assassination. He alerted the President and miraculously prevented his death. Lincoln was so impressed (and grateful one would assume) that he invented a Cabinet post called Prime Oracle. This Prime Oracle’s job was to predict natural and man made disasters and he ended up being so successful that the citizens of America soon came to trust and believe in psychic abilities. Thus, the America of this world has averted the disasters that befell alternate Americas. Earthquakes, volcanic eruptions, assassinations — all of these things are predicted, so those affected can make plans (in the event of a natural disaster) or prevent what’s to come by changing the outcome.

For instance, President John F. Kennedy was never killed in Dallas in 1963 — he survived until March of 1996 when he died at the age of 78 due to complications from Addison’s disease (a disease he had fought all of his life). Robert F. Kennedy and Martin Luther King Jr. attended his funeral.

On Psychic world, 10 per cent of the population possesses some sort of psychic ability. These people are recruited at a very young age to hone their skills at the National Academy For Seers in San Francisco. These “Oracles” are trained to perform different societal duties: medical diagnosis (no X-rays here because “doctors” can determine someone’s medical history just by using a hands-on approach), mineral exploration (gold mining on the moon), criminology (police make preventative arrests if a crime has been predicted and then re-arrest you if you actually commit the infraction).

The current Prime Oracle was appointed to the post when he was in his early 20s and his first years were rather controversial. Now, in the 1990s, the man is not well. He has already seen that he will die of a cerebral hemorrhage and thus he is responsible for hand-picking his successor. He chooses Derek Bond.

“To me ‘Obsession’ is middle-of-the-road,” says Tracy Tormé. “We really hadn’t done any strong Sabrina Lloyd shows and wanted a very powerful story. It was fun seeing Isaac Hayes in it, and I thought the ending was clever, the way we got out of the whole situation. The show was really more for our female fans; a romance novel-type show. Not one of my personal favorites, but solid.”

Originally, Tormé was going to cast his father, Mel Tormé, in the role of the Prime Oracle. “I thought that was kind of dull. I thought ‘if we’re going to use him, let’s really use him.” As a result, the Velvet Fog made hisSliders debut in Greatfellas.

“Obsession” is the sleeper hit of the season. It simply doesn’t get its due. It not only features strong character development for both Quinn and Wade; it also has one of the most complex and well-developed plots of the series. This story actually utilizes foreshadowing!