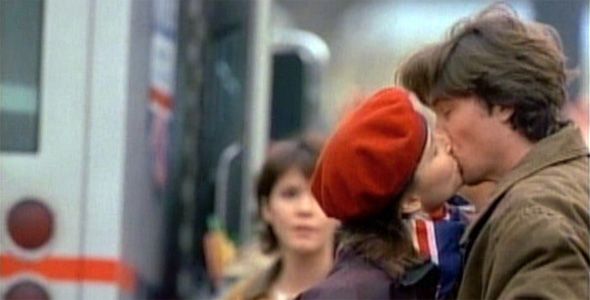 After a close run in with a tidal wave and a massive shark, the Sliders land in an America where the English won the Revolutionary War. The British States of America at first prove very welcoming to our band of vagrants as Arturo is mistaken for his highly successful other, the Sheriff of San Francisco. This works well until the British jokes run out and their car breaks down in Oakland Raider territory. When they improbably prevent the assassination of the Crown Prince, Quinn unwittingly finds himself the leader of a gang of rebels intent on bringing the monarchy to its knees. While Quinn plays Robin Hood, the rescued Prince Harold is learning about the lives of his people and falling head over heels for Wade. The Sheriff captures Quinn and schedules him for execution, but he is spared when Prince Harold intervenes and deposes himself in order to try out an experiment in democracy.

As the Sliders jump into the vortex to leave British World, there is a sign high above in the background that reads “Eaton’s,” which is a popular Canadian department store.

Just after Sheriff Arturo finishes getting made-up for his second press conference, he stands before the mirror, removes the tissues stuck in his collar and whispers “God, I look good.” 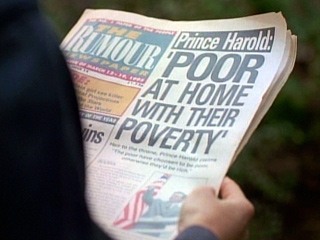 On this world, the American colonists lost the Revolutionary War to the British and remained under the rule of the British Monarchy. George Washington was hanged in 1779 and as a result, his inspiration to take arms against oppressors never really caught on and none of the great revolutions in history took place. Today, the world is ruled by a handful of monarchies. The American territory is referred to as the British States of America.

Maximillian Arturo is the Sheriff of the Western Americas, and has executive power while King Thomas of Britain is lost on the battlefields of France. In an attempt to please the commoners, Arturo, established a 74% tax for the people.

The city of Oakland was never developed and the land is used as the private game reserve of Prince Harold III, prince of the Americas. Still, revolutionaries called Oakland Raiders, roam the woods.

Prince Harold’s father, King Thomas, was the most popular monarch of the 20th century.

The second Magna Carta gives the prince the power to relieve the sheriff from his post.

The working title for this episode in pre-production was “A Royal Pain.”

“It’s going to be interesting to see the response to that one in the UK!” laughs Tormé. That was written by two writers who had just spent a year in England, and although they had many good things to say about the place, it was also their way of exorcising a lot of things they didn’t like — the food, British engineering breaking down… It was almost a parody of British things. I think in general terms, the show is fairly universal. Even the parts that deal with American history. A lot of Europeans know American history pretty well, so there really shouldn’t be a cross-cultural problem there.”

The idea behind “Prince of Wails” served as the genesis of the series.

Tormé stumbled on one classic example of [alternate history] while researching a Revolutionary War project. He learned that eight enemy sharpshooters once took aim at George Washington as he was leading his army on horseback — and all missed.

“The only thing holding the army together at that time was Washington,” says Tormé. “So, if any of those eight guys is any kind of decent shot, Washington’s killed, the revolution is over, none of us are here and there is no United States.”

The producers had originally meant for “Prince of Wails” to air the week following Summer of Love but Fox opted not to use the suggested order. As a result, the Sliders are dressed in hippie attire as they climb to the top of the Trans-America Tower at this episode’s opening because the flooding in this world was supposed to have been a result of the final tidal wave in Summer of Love. “FOX wanted the ability to always air the show in what ever order they chose and they thought that was much more important than the continuity of the show,” Tormé says. “They just really frowned on any endings that would lock them into running another show after it.” As a result of this tug-of-war, Tormé says that the people behind the show simply moved away from tying the end of one episode into the beginning of another. “We weren’t going to use [that plot device] every week but we wanted to be able to use it fairly frequently,” he says.

“But [Fox] just really wouldn’t let us do it, it just wasn’t worth the fight anymore because they just frowned on it so much, unfortunately.” It should be noted that when Fox repeated the first season’s episodes during the summer of 1995, the network did show the two episodes in the order that the producers intended.

The prop newspapers, flyers and signs, which the Sliders rely so heavily on to get information about their current surroundings, are thanks to the property department head and his team. “Basically there’s somebody whose job it is to go through [the script] and pick all of those things out and make sure they’re done right,” Tormé says. “If we were in Vancouver we would look at them or if we were in L.A. they would fax them to us and we would either approve it or ask them to take a second stab at it.”

In interviews, series co-creator Tracy Tormé has talked openly about the idea of a world where the United States lost the Revolutionary War as the genesis of the show. This is his vision made manifest.