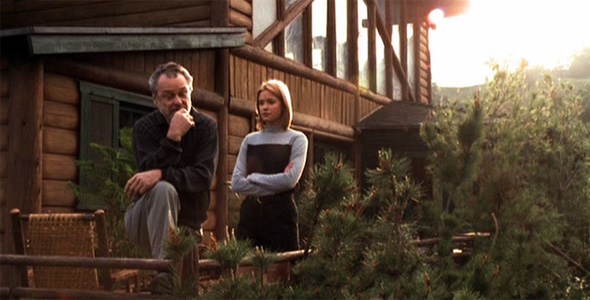 Upon finding themselves stranded on a dusty, boring world for three weeks, Rembrandt discovers a series of science fiction novels describing in eerie detail a human/Kromagg war. Intrigued, the Sliders research author Isaac Clark and track him to his mountainside retreat. Quinn and Colin plead their case to Clark and his daughter Catherine, and after she dismisses their claims, Isaac admits he is in fact a refugee from the world he’s written about. The Sliders then set about convincing him to return home and introduce them to Michael Mallory so that they might obtain his anti-Kromagg weapon.

Clark gives the Sliders a revised set of coordinates to his homeworld and the six slide into a world that’s healed and moved on after 20 years of peace. The Clarks split off from the Sliders and head for the Chandler while Quinn and Colin lead Rembrandt and Maggie to their homecoming. The Mallories reunited, Quinn, Colin, and Maggie decide to stay here, leaving Rembrandt to return home alone. While searching out Isaac Clark, he learns the writer and his brother are fugitives, and that he’s led the Sliders to the wrong world, one where the Kromaggs faced a holocaust. Quinn discovers this simultaneously, and the Sliders reunite as they flee this world and its oppressive regime, hoping one day to find home and save Earth Prime.

Quinn’s comments about showers, knives and wigs is especially appropriate considering they were filming at the Bates Motel set at Universal Studios.

On Kromagg Double Prime, the humans and Kromaggs evolved very similarly as they did on Kromagg Prime, except here, there was no aggressive military campaign against the humans. The Kromaggs were sub-par on the intelligence scale and had little capacity for improvement. Apparently, however, their docile nature wasn’t enough for the humans.

Led by Michael and Elizabeth Mallory, the humans created sliding technology as well as a horrible device that killed most of the Kromaggs. Those that weren’t killed were placed in internment camps and killed much in the same way that Jews were destroyed during Hitler’s genocide. The Kromagg “problem” ended, the Mallory’s were proclaimed heroes and went to retrieve their sons, whom they had placed in foster care on parallel worlds. They returned empty handed.

A number of Kromagg sympathizers, including Doctor Isaac Clark, were exiled from this world, knowing they could never return. Clark and his brother had built a formidable case against the Mallory’s and hoped to used it in the World Court to show the atrocities visited upon the Kromaggs by the humans.

So what’s the titular revelation? That the script was significantly retooled — and the real story never made it to screen, according to Marc Scott Zicree at Dragon*Con.

Looking at certain clues in prior episodes — particularly Colin’s quantum signature varying from Quinn’s in The Alternateville Horror — it’s clear that production had a plan for his character that would eventually play a part with the season-long Kromagg arc.

Initially, the Sliders were to return to Kromagg Prime in “Revelations,” and up until Isaac Clarke’s change of the dimensional coordinates the script went largely unchanged. However, after sliding with Isaac and his daughter, Colin was supposed to begin acting very strangely.

Why? He was really a Kromagg plant — created from Quinn’s DNA (taken in Invasion and designed to infiltrate the Sliders’ journey towards home so the Kromaggs could have a vicious homecoming. The microdots? Pure fabrications.

And was that Earth Prime they landed on in Genesis and The Exodus? Nope.

The Colin arc would have ended in Quinn and Colin fighting as the Kromaggs triumphantly return to their homeworld. So what happened?

Executive Producer David Peckinpah nixed the idea. It’s also speculation that with Jerry O’Connell on board as a producer (and a potential 5th season), Colin was deemed more long-term than the fourth season villain, and keeping him a willing Sliders would let him return to the series if need be.

According to the Dimension of Continuity, Lipschitz Live was Peckinpah’s excuse to force the change of direction midseason, as the Colin clone negated the idea that Colin was a one-of-a-kind machination of the Kromaggs.

The only thing “Revelations” reveals is how gullible I was to think that this season would be any different from the last one.

Able to drag wormholes with its super powers, I suppose.