When Quinn rescues a beautiful young woman in distress on a world ruled by violence, her homicidal boyfriend, swearing vengeance for an imagined slight, follows the sliders through the vortex.

The Sliders encounter a vicious race of technologically advanced aliens who hold a nasty surprise for the quartet — they can slide at will, and intend to conquer every Earth in the dimensional spectrum.

The sliders find themselves face-to-jaw with an extremely large (and angry) beast when they lose Quinn and the timer, in a San Francisco that's been developed as a game preserve — for dinosaurs. 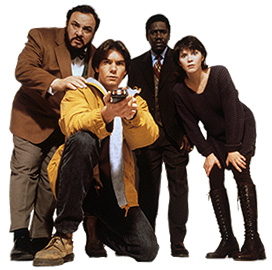