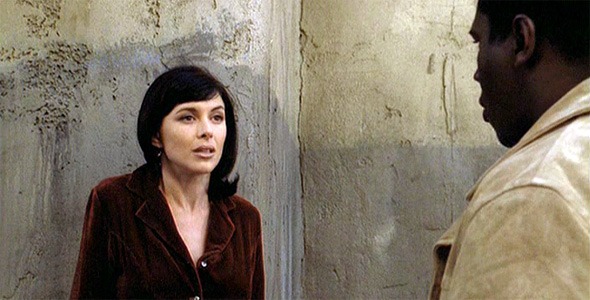 It’s night, at a military base. Maggie walks into a men’s bathroom, exchanges a few pleasantries with the guard taking a piss next to her, then knocks him unconscious. She slices open his arm and removes a small metallic device. Walking outside, she uses the device to open a door that’s been secured. The room is a lab, and Maggie steals a small chip that’s been implanted in a soldier’s neck. Rushing, Maggie changes out of her disguise and catches up with Quinn, Colin and Rembrandt. They slide, but another Maggie, our Maggie, comes running out after the vortex. It closes, and she collapses to the ground, MPs taking her back to the bunker.

On the next world, Quinn chastises Alt-Maggie for being so late and asks if the base has sliding equipment. Alt-Maggie, however, is ecstatic to be in a new place; she pets the horses and clamors to go and explore the surroundings. Stepping outside, they witness the trial and execution of a man in possession of Tech — technology. Ironically, the villager is condemned to death by radiation poisoning in the belly of El Diablo Nuclear Facility.

Back on the previous world, Maggie comes face to face with Colonel Burke, who suspects Maggie might be a little off-kilter. She explains that the Uniform Rules of Conduct have been repealed, allowing a possible traitor to be shot on sight. Maggie is escorted back to her barracks and encounters Siskin, her double’s co-pilot. Maggie learns that pilots on this world are “enhanced,” given a direct tap to a neural network to boost reaction times and flight coordination. She sneaks out to another office to look for information on this world’s sliding capabilities when she runs into a walking version of her dead husband.

On Medieval World, the four Sliders sit around the table of a local pub and discuss lying low. Alt-Maggie, however, persuades Quinn to dance with her. They kiss, but she starts feeling ill and stumbles outside. Wandering to the inn, Alt-Maggie places her pirated chip in the implant section on her neck. She immediately feels better.

Steven Jensen has a very heated debate with Maggie. It seems she could have resigned her commission, but stayed on and let her own husband administer the operation that classified her. Maggie slinks back to her bunk and falls asleep.

In the morning, Alt-Maggie buys some odd fruit for Quinn and herself. She sluffs off her illness the previous night to a rough slide and the local grog. The two discuss why they never got together, with Quinn saying they are just friends and that with everything else that’s going on, initiating any kind of relationship would be a mistake. Alt-Maggie is disappointed, but Colin arrives with Rembrandt and takes her horseback riding. Rembrandt expresses concern over Maggie to Quinn, but Quinn dismisses her strange behavior to finally putting her personal tragedies behind her.

Maggie oversees the integration of new technology into Siskin’s body. At first it greatly increases the flight capabilities of the pilot, but the computer goes into overload and fries his brain. Colonel Burke decides that since Maggie is next on the flight roster and doesn’t want her to waste time coaching a new partner that she’ll be moved to the next phase of pilot enhancement. What Maggie finds frightens her: decapitated heads immersed in a bioelectric gel that connects the mind of the deceased pilot to the plane’s computer. Maggie’s brain is to “captain” the rest of the crew. She appeals to Steven by admitting that she’s from a parallel world but he does not believe her.

Colin and Alt-Maggie return from riding, and while walking towards the inn, Alt-Maggie experiences another seizure and runs to an alleyway. Rembrandt follows her and watches as she takes the chip from her neck. Confronting her with this evidence, Alt-Maggie knocks Rembrandt down, then reveals to the town that Rembrandt is carrying the timer — a dangerous piece of Tech for which he is arrested.

With only a few hours until the slide, Alt-Maggie and Quinn are discussing where Rembrandt might be when Colin runs in and declares that Rembrandt’s been charged with heresy. They set out to rescue him.

Back on the base, Maggie is ready to undergo the operation when she proves her identity by showing Jensen her lack of implants (suppress your laughs here). Astonished, Jensen agrees that she must be from a parallel earth, but Colonel Burke busts in, brands Maggie a traitor and orders her to become a living computer. Maggie urges Steven to help.

Rembrandt is on trial when Quinn gets up and delivers a speech on the ills and evils of technology before activating the timer. Alt-Maggie collapses and asks to just die here, but Quinn, Colin and Rembrandt drag her through the wormhole to the other side. At the base, Alt-Maggie sends an email through her implants to Steven, who lets the four inside the base. He then proceeds to try and perform the operation on Alt-Maggie, fudges the death and brings her back to life after Colonel Burke leaves. Maggie has a moment of closure with her deceased husband and slides with her friends from the lab.

Pulsar Triple Prime can best be described as being virtually identical to Maggie’s Earth Prime. While it’s difficult to discern off the bat if Ollie’s president, there’s been three World Wars or nukes dropped on San Diego and Los Angeles, the U.S. is at full military alert against the Soviet Union. In fact, things are worse than Pulsar Prime. The U.S. is converting its pilots using the Enhanced Pilot Program into a neural network, as well as chopping their heads off and converting them into living brain pilot things. Who knows.

Pulsar Triple Prime is in the process of building a quantum translocation device under the aegis of Doctor Steven Jensen.

Medieval World at one point had some level of technological development, and then, as it always happens, all hell broke loose. Something created a panic in the people, and they reverted to a level of feudalism while at the same time remaining fundamentally ignorant of radiation and nuclear power plants. Who would’ve guessed?

“What we did was try to play two worlds against each other,” explains Chris Black, “splitting the Sliders up in one world where technology has run amuck and taken over these people’s lives, and the flip side was a world where technology is forbidden and an anathema to these people, so we see how these two worlds collide and how our Sliders react when they’re stuck on each world.”

“There’s an episode where my double slides with the rest of the Sliders and I stay back at a military base with my husband’s double,” says Kari Wuhrer. “So I get to re-experience him and I show a lot emotionally through that experience.”

“It was a tough episode for me because we get to see a lot of Maggie’s pain. It has been difficult for her.”

In a second half where we’ve seen more misses than hits, “Slide by Wire” is a welcome oasis in a desert of mediocrity.

Confiscated by the peons who are afraid of the Tech but retrieved by Quinn.