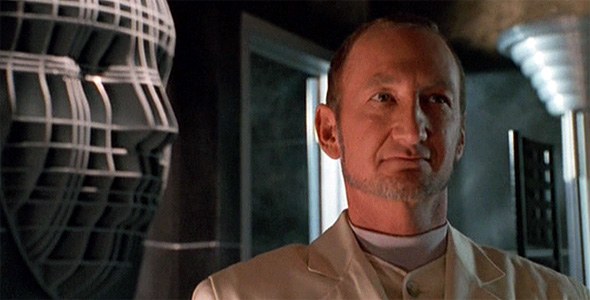 Humanity has been eradicated by the robots they created for menial labor. The four come to the rescue of one of the automatons, an affable DERIC model. While attempting to find one of DERIC’s friends, Rembrandt and Quinn are captured and brought back to the factory, where they they meet James Aldohn, creator of the robots. Aldohn has been crippled in an industrial accident and has developed a technique to transfer a human mind into a robot body. Not wanting to risk this on himself, he intends to use the Sliders as test subjects. Outside, Wade and DERIC really hit it off while Arturo attempts to reactivate an ERICA model needed to infiltrate the factory. Quinn and Rembrandt escape while the others break in, but all six are captured. To fight off being transferred into his robotic double, Quinn must find a way to overload the system while the others fight their way through Aldohn.

James Aldohn created Aldohn Robotic Technologies, a company that would build and sell robots to humans so they wouldn’t have to work anymore, giving them more free time to “enjoy the pleasures of everyday living.”

But something went wrong. Robots eventually took over the entire workforce — scaring humans into thinking they’d outlived their usefulness. The humans rebelled and tried to destroy the robots. Aldohn, while a genius, was unable to perfect his A and B model of the E.R.I. (Emotional Response Intelligence) series because the emotions chip conflicted with the unit’s logic chip. Aldohn tried to call the models back to the factory to be repaired or dismantled but some refused to return.

When the E.R.I. units realized this they went into defense mode and began turning on the human populace. As a result of this ‘war,’ Aldohn sent out Return Patrol Paul (RPP) units to bring the E.R.I.s back to the factory. For the most part, the RPPs were successful in their bid to destroy the E.R.I. models, leveling a population of 2,916 to just a dozen or so.

However, by then, it was too late. The human population had been wiped out by the destructive E.R.I., leaving Aldohn — called “father” by his creations — as the last remaining human.

In 1989, an industrial accident killed Aldohn and his creations downloaded his brain into a robot. He never knew he was what he created until his robotic “death” in 1996.

While it isn’t a terrible episode, “State of the Art” is goddamn boring. Never have I seen a television program devote so much energy to androids/artificial life forms and have it represent so little.

In a world ruled by automatons who've made humans obsolete, Quinn and Rembrandt become the guinea pigs in a ghastly experiment: the transplantation of their brains into robotic hosts.