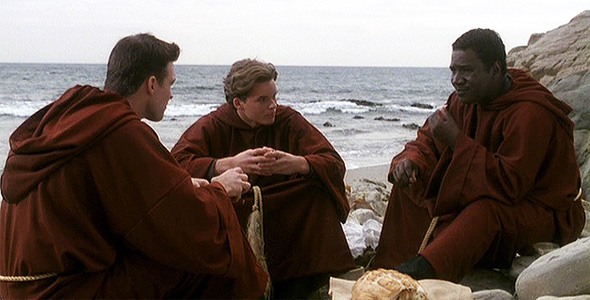 The Sliders land on an island, visibly roughed up from their last adventure. Maggie is hurt and barely conscious. Seeking shelter, they find a monastery run by a group of people known as the Keepers. The head of the group, Keeper Abraham, is reluctant to help them, fearing that they may be enemy spies. His son, Seth, however, knows the Sliders cannot survive the elements and welcomes them into their compound. Keeper James, a doctor, tends to Maggie’s health and develops a crush on her. The other Sliders learn that the Keepers are hiding from the Volsang raiders, a vicious race of warriors that have conquered the entire world. By pretending to be a penniless, contemplative order, the Keepers hide their true mission: the recording of civilization’s achievements onto silicate disks. This chronicle, they hope, will some day teach surviving generations how to eventually defeat the Volsangs. Diana suggests they transfer the data from the fragile silicate disks to a more durable quartz crystal. Her offer to help is accepted by Keeper Abraham, but suddenly the compound is under attack from the Volsangs. Bombshells begin to explode as Rembrandt and Mallory grab firearms to join the Keepers in their fight against the enemy. Diana gets busy with her PDL to safeguard the data from the Volsangs. Maggie is with Keeper James, whom she discovers is a traitor. Diana finishes her work in the nick of time and hands the encrypted crystal to Seth, who flees the island. The Volsangs capture the monastery, but are too late to seize the Keepers’ work.

All of the needs of the Sliders are met by the Keepers, as long as they perform the tasks set out for them each day.

After the collapse of the Human Spirit Hemispheric Alliance, a barbarian raider named Vortak banded together a group known as the Volsangs and took control of an anarchist society. Like a plague, Vortak swept down from the Yukon wasteland in Alaska.

There was no central force to stop them nor a government powerful enough to end their rage. They continue to attack every island, city or anywhere else until they have all the power they want.

A group of islanders on St. Caroline have been hiding in secrecy compiling something called the Great Work which holds a record of all that their civilization ever achieved. It is the sum total of their knowledge. The Volsangs would very much like to get the information of the Great Work because they can use it against their enemies.

The working title for this episode in pre-production was “Lindisfarne.”

This story was initially far different. How so? Well, it didn’t involve a bunch of Vikings taking over the world, for one.

“In [writer] Robert [Massello]’s original concept the monks were an order who were gathering not just the knowledge of their world, but the knowledge from many parallel Earths,” notes Keith Damron. “The monastery was to be a sort of pan-dimensional library at Alexandria. The monks’ mission was to protect this legacy from Kromagg invasion and conquest.

“We didn’t want too many people to posses the sliding technology. We would always strive to make the four Sliders (any four) travelers on a one of a kind journey. When it was vital to a story in development this rule was broken but not very often. In the case of “The Great Work” it hardly impacted the story at all so it was decided to drop the multi-dimensional library in favor of a single Earth venue. We also found we didn’t need the Kromaggs in this episode for that same reason.

The story was pitched September 9th, 1998, went through two subsequent drafts by the writer and was delivered September 23rd.

This is a filler episode in a filler season. We’re just killing time until the theoretical syndication money rolls in.