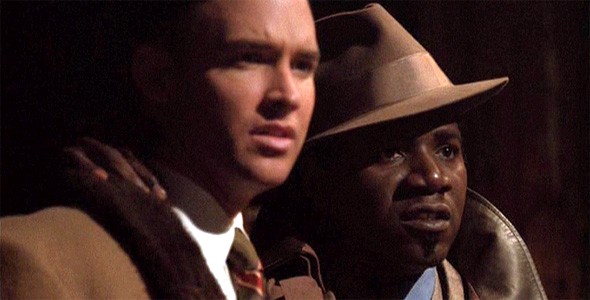 The Sliders land in a world reminiscent of the Roaring Twenties. But instead of bootleg liquor, caffeine is prohibited and the Hippo Club deals heavily in it. The Sliders help out Angie, a beautiful nightclub singer and owner of the Hippo Club whose staff quits when a murder occurs outside her club. But the show must go on. With the help of the Sliders, it does. Rembrandt is in his element performing at the piano and providing back-up vocals for Angie. Maggie plays waitress, Diana fills in for the cigarette girl, and Mallory tends bar. Dropper Daddy, a notorious gangster, is looking for a new supplier of caffeine. But before Dropper Daddy can locate one, Angie’s lover Harrell is killed by a crooked cop, Rembrandt Brown — our Rembrandt’s alternate in this world. Dropper Daddy and his goons kidnap Angie, believing she has the information he wants, and rough her up to make her talk. The Sliders work with the police to bust Dropper Daddy’s operation and to save Angie. With a new lease on life, Angie decides to close the Hippo Club and devote herself to singing. 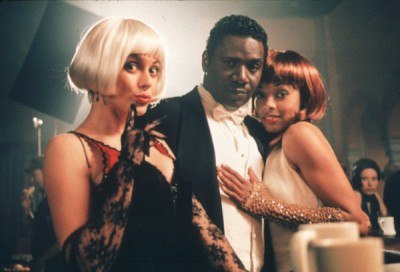 With the passage of the Gephardt Act, even caffeine was banned here. Finally, the American government had removed a liberty that once flowed freely across the country like booze, cigarettes and beef before it. While it’s unknown how massive tobacco, alcohol and coffee bean PACs were looked over by Congress and Senate, the result is clear: a cleaner living America.

But what about those people who crave caffeine and other items prohibited in this country? Speakeasies, throwbacks to the 1920s, have flourished by providing people with illegal hooch, tobacco and caffeine. In fact, the 1920s atmosphere is everywhere in this United States, showing that laissez faire didn’t really help fedora sales.

In Los Angeles, a major speakeasy is the Hippo Club, owned by lounge singer Angie Morgan. Morgan supplies her customers with synthetic caffeine mixed with sugar. While the synthetic stuff is just as good at giving people a buzz, it’s also got some irritating side effects, like seizures. And, well, death.

A tedious 45 minutes of plodding nonsense that throws away an intriguing parallel world in favor of cheap and under-budgeted spectacle.