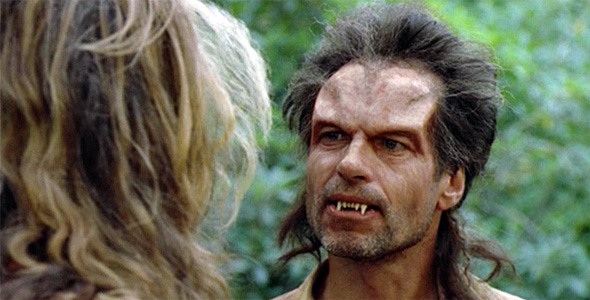 A renegade scientist is using his own private island to develop human hybrids — humans mixed with animal DNA. He’s attempting to create a docile set of slaves when Rickman and the Sliders crash his party. Lacking any human specimens, Rickman takes to feeding on the hybrids and his appearance begins to resemble theirs. He takes over as leader of the group and sets his fellow creatures out to capture the Sliders. Rembrandt escapes and pleads with the scientist to arm him with guns, but there’s a condition. Rembrandt must give him his DNA to make more hybrids. After seeing how he treats his slaves, Rembrandt cannot go along with it. Fortunately, Rickman’s become unstable and foolishly allows the others to escape with both timers. Rembrandt goes back for one of the hybrids he befriended, but she does not want to leave. The three original Sliders are set to go home when Rickman attacks. Unwillingly to leave Maggie to fend for herself, Quinn sends the others home and stays behind. Rickman kills himself trying to pursue Wade and Rembrandt, and Quinn and Maggie track the wormhole — only the tracker fails. They end up in a world of the future, lost once again.

Hybrid World has a slightly different topology than Earth Prime. Whether tectonic stress finally took it’s toll or the Ring of Fire busted up the California land mass millions of years ago, the end result is that California has broken up — and a chain of islands has taken its place.

The U.S. government has allowed people to purchase these islands, which is exactly what Doctor Vargas did when he purchased an old sugar plantation and converted it into a laboratory five years ago. While it’s assumed that these islands are under federal control, there really is no one policing what happens on the islands.

Vargas created a human-animal hybrid species on his island. Most are more animal than man; however, some have displayed intelligence and speech capacity. Those who can speak refer to the mainlaid and “the land that lives under the horizon” and are not permitted to visit it. 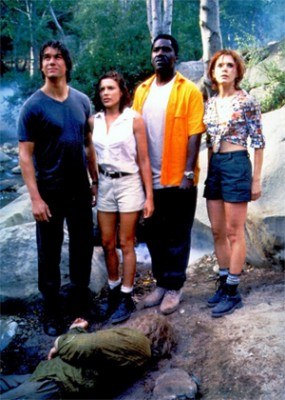 “This Slide of Paradise” wasn’t meant to be a cliffhanger — the original scripted ending had Rickman falling to his death with his timer in hand, and the Sliders dejectedly entering another wormhole knowing their chance home was dashed on the rocks below. So what happened?

The Dimension of Continuity reports that while FOX was waffling on its decision to renew, it asked production to put in a cliffhanger leaving just Jerry O’Connell and Kari Wuhrer, allowing them to create a 13-episode order for the next season that would rotate on Friday nights with John Corbett’sThe Visitor and a third unnamed series. The proposal? A view of the multiverse through the “eyes of love.”

When the Sci-Fi Channel expressed interest in taking over the reins of the series, however, this idea was dropped.

Of her ocean dip at the beginning of the episode, Sabrina says: “They made us go out into the ocean in Northern California. The water was freezing, there was a horrible undercurrent, and I almost drowned! I felt very daring.”

Maybe “This Slide of Paradise” isn’t offensive enough to really warrant a no star rating, but it doesn’t do anything that deserves credit. I’m tired of giving Sliders points for showing up; fortunately, with the season being over, I don’t have to.

The final showdown between the Sliders and Colonel Rickman takes place on an island inhabited by bizarre hybrid creatures created by a mad scientist.

Damaged either by the ocean landing or when Quinn drops it in the forest, the timer doesn't track Rickman's wormhole, separating Wade and Rembrandt from Quinn and Maggie on different worlds.