Has any show ever abused its loyal audience as much as Sliders did?

In modern fantasy television, courting fan support is practical and widespread. It’s a good way to build an audience. In the 90’s, J. Michael Straczynski started a trend of interacting with fans on Babylon 5 newsgroups. And now we’re in a world where the star of Chuck, Zachary Levi, led groups of fans to Subway sandwich shops to encourage the continued sponsorship for Chuck that resulted in the show returning for its fourth and fifth seasons. Sliders was much like Chuck: fan support got Sliders back on the air time and time again.

Yet, rather than leverage fan support or appreciate it, the latter-era producers and writers on Sliders consistently mismanaged their relationship with their loyal audience.

If it were not for fan support, Sliders would not have been renewed for a third season. Admittedly, executive producer David Peckinpah would have drawn a salary even if he hadn’t been given charge of Sliders. The studio had signed a development deal contractually obligating them to pay him even if it was just to sit around. Nevertheless, Universal, FOX, and the production were drawing revenue from new episodes of Sliders because fans wanted more of Quinn, Wade, Rembrandt, Arturo, the concept, and the dynamic chemistry between the characters. Sliders had been cancelled after the second season. It returned only due to the huge-scale writing and phone campaign from the fans. 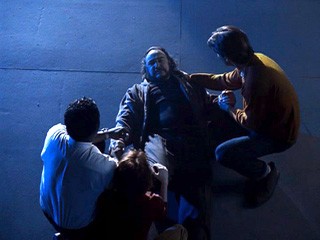 And with the third season, Universal and FOX fired John Rhys-Davies (Professor Arturo) over a behind-the-scenes conflict. The Professor was a vital part of the cast chemistry, and his absence destroyed the group dynamic that the fans had fought to see return.

If the studio and network weren’t going to give fans the show they’d campaigned for, there was no point to doing the show at all.

Had Sliders been cancelled after the second season, the last aired episode would have been As Time Goes By. The show would have ended on a spectacular episode that gave the characters vivid definition and spun the Sliders concept in three fascinating and fully-developed directions. It was like three riveting episodes contained in one, and it ended with Quinn, Wade, Rembrandt and Arturo still traveling, still exploring, still intact.

The third year of Sliders, in contrast, left the team with Arturo humiliated and executed and the remaining three characters becoming argumentative, ineffectual and unlikable. Fans campaigned for a third season because they wanted to see John Rhys-Davies’ acting, not Kari Wuhrer’s. They wanted a good show, not a forum for producers and networks to act out personal grudges against vital cast members.

Genesis, the fourth season premiere, responded to said fan support by condemning Wade Welles to off-screen rape and interspecies breeding. I think it’s safe to say the fans didn’t support Sliders‘ continued existence in order to see its cast and characters insulted in such a shabby fashion, and they certainly didn’t support the show in order for Jerry O’Connell to give his brother acting work. If it weren’t for the fans, Jerry would not have been employed for 22 more episodes after the FOX cancellation.

And how did Jerry repay the fans to whom he owed his continued employment and his career widening into writing, producing, and directing? With lazy and character-sabotaging performances in the fourth season. Exempting World Killer and The Alternateville Horror, his performances in the fourth season were largely devoid of emotion or intensity, ultimately warping the Quinn Mallory character beyond recognition. 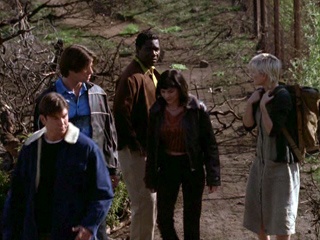 In Mother and Child, the Sliders try – and fail – to save Wade from a Kromagg breeding camp. While the script did not focus its attention on this issue, Cleavant Derricks played Rembrandt with the requisite agony, frustration, and grief needed in the response to the loss of his friend. Jerry’s mechanical delivery in those same scenes undercut Cleavant’s emotions instead of mirroring them, giving the impression Quinn Mallory felt no concern for Wade Welles – a friend whose safety he was solely responsible for – and no emotional obligation to her captivity and rape.

Jerry O’Connell, the central actor in the series, refused to return to Sliders for a fifth season because his demands (an executive producer position and season-long employment for brother Charlie) were denied. Quinn Mallory vanished from the series without the actor appearing onscreen and Jerry refused to do guest appearances despite being available for them.

Jerry had benefited greatly from fan support for Sliders: extended employment, writing, directing, and producing credits, and the chance to get his brother work. His refusal to perform an exit story for Quinn was due to his issues with the producers of the show, but it wasn’t the producers that his refusal hurt. It was the fans, who had never done anything to Jerry but aid his career with their support. And despite that, Jerry denied them any closure for the Quinn Mallory character, leaving them stunned, hurt, and confused by The Unstuck Man.

The lack of concern for the fans was made manifest in Strangers and Comrades. The fourth season had shown Earth Prime (where Quinn, Wade, Rembrandt, and Arturo lived before sliding, always presented with a history identical to the audience’s Earth) was subjugated by the Kromaggs. The characters had vowed to find an anti-Kromagg superweapon to liberate home, but this goal was largely dismissed despite finding three separate weapons capable of liberating their world. “Strangers and Comrades” had Rembrandt discover the sought-for superweapon described in “Genesis” was useless, and the plot of finding a way to free Rembrandt’s home, our home, was declared dead on arrival. Rembrandt had given up on saving us from the Kromaggs.

There wouldn’t have been a third, fourth or fifth season of Sliders without the fans. And the production put out an episode saying the fans should be abandoned to die. 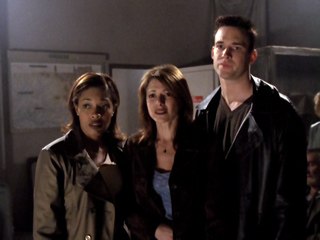 The cliffhanger ending of the fifth season was conceived after the Sliders production team knew that there would be no sixth season. The producers were upset that the Sci-Fi Channel was no longer providing feedback on their episodes and wished to lash out. But it’s unlikely the Sci-Fi Channel suffered the slightest negative impact from the unresolved cliffhanger. The only party to suffer was the audience.

It was a loyal audience who’d preserved the Sliders series for long past its first run of nine episodes. And they were rewarded with constant unprofessionalism behind the scenes, causing personal conflicts that resulted in:

A Drop of Kindness in the Desert 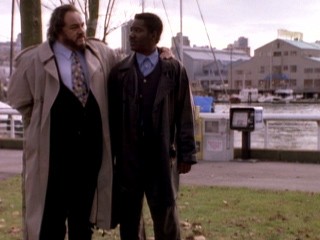 It would be wrong to say that the fans of the series were treated with total indifference by the cast and creators. After the 2000 cancellation, original creators Robert K. Weiss and Tracy Tormé responded to fan e-mails and participated in chats, assuring the fans that they’d loved the series too and were equally saddened by its decline after they’d left the show. Cleavant Derricks, the only remaining cast member for all five seasons, declared that he always returned because he knew it was the fans who’d brought the show back every year and he felt obligated to show the same level of commitment. Despite dire scripts and dull stories, Mr. Derricks never did less than his best, even if he was visibly struggling.

John Rhys-Davies, in the December 1997 edition of TV Zone, observed that the third season of Sliders did not reward the viewer’s investment of time with sufficiently thought-provoking content. Mr. Davies felt that Sliders should have been a Star Trek scale franchise for Universal. He made it clear that he adored the Sliders concept. Universal and FOX had fired the man who loved Sliders while retaining the creators who were at best indifferent to it.

The Light At The End of the Tunnel

Genre television is a very different landscape from what it was when Sliders was on the air. These days, shows like Community and Fringe see their creators actively engaging with fans through social media. Community creator Dan Harmon has spoken in interviews about how he considers fans to have an important (but not controlling) vote in all storylines, how he reviews fan reaction and incorporates it into scripts if it will strengthen the material. Chuck, Community, and Fringe have cast and creators who reach out to fans through the fan community and do their best to make a product that is worthy of the interest the fans have for it. Appreciation for the fans is a constant factor in interviews with cast and creators from these shows.

The relationship between creator and audience is a sacred trust that genre shows can either manage to their benefit or misuse at their cost. Sliders was loved no less than Community, Chuck and Fringe. But in its last three seasons, Sliders was made by creators who never cared enough to show fans the same support the fans showed them.

4 responses to “Abusing The Audience”