Heat of the Moment

“And so it’s like 99% written, and I got word FOX wanted John out and John was leaving and John was at the center of the whole story. They came to me and said to rewrite it with the new character and I just refused.

That place is here.

Heat of the Moment. 41 pages of rough draft curiosity first discussed at the 1997 DragonCon. Sliders fans have the basic outline — a Last Days doomsday scenario with the Earth slowly falling into the sun — but we’ve never gotten a full summary of what Tracy wrote before he learned John Rhys-Davies was off the show. 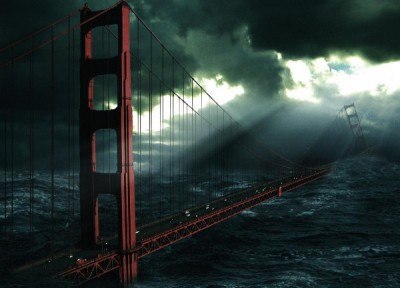 According to Tormé, there’s been at least three iterations of the story (four if you count aborted film franchise attempts), none of which made public. An outline of the story’s beats was written in July 1996, but major changes were made as the script was written. “My father (singer Mel Tormé) had a stroke in August,” he notes. “It made me start thinking about death and so I incorporated a lot of tragedy when making the transition from outline to script.” Those tragic elements would play out with the murder of Rembrandt in the teleplay.

The third and final version of the story came when Tormé attempted to convert the story to the Acclaim series of comics. According to Jeff Gomez, the man overseeing the Sliders title at Acclaim, the comic would have ended with Quinn sacrificing himself to get the others back to Earth Prime. “In order for others to escape the dimension, Quinn was forced to remain behind, sacrificing himself in a truly touching and noble way. We were definitely going to do that one!” With the cancellation of Get a Life, however, those plans stalled out as well.

Much of this information will be old hat to Sliders fans, but appreciate the perspective. This story has been discussed for over a decade and has had several attempts at publication. It’s written by the creator of the series and is one of the last open chapters for dedicated fans of the show. So why is the story finally making its way out to us? Someone grease the right palm, call in a marker?

Nope — Tracy found it while looking through a box in his basement and felt like sharing.

What follows is a summary of Heat of the Moment as written by the Maestro himself. He hopes you enjoy what’s provided, and who knows? Maybe one day the full script will be a souvenir at DragonCon 2021!

By Popular Demand: Heat of the Moment Summary

Written by Tracy Tormé for all Sliders fans

The teaser begins on a regular Earth, similar to the Sliders’ home. In my script I incorporated a little bit of foreshadowing on my part, a clue to the ending which probably, if filmed, would’ve been at first considered an error by the viewer. This clue involved the Sliders going to the hotel after shopping, walking past Elsa Diggs (female double), and into their room. The clue is a decision, a small insignificant decision — Wade asks Rembrandt what color shirt she should wear for the next world, yellow or pink. Rembrandt suggests yellow. After a private conversation between Quinn and Arturo, they slide, with Wade in the yellow shirt.

Upon landing in the next dimension, Wade is wearing the pink shirt (which if filmed would’ve seemed like a production error, but it’s not). Anyway, they land on the Golden Gate Bridge and immediately realize the sun is orange and disturbingly huge and it’s hot as hell. There are no cars around and no people, at least until they get downtown and see very few people wearing strange triangular hats. The Sliders question some people about what’s going on, to no avail. 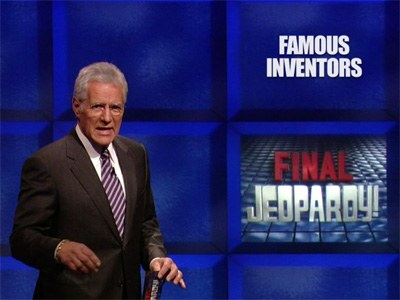 They finally get their answer when walking by store window — Jeopardy is on and Alex gives one of his answers (while also wearing an ice hat): “When the asteroid that caused Earth’s orbit to fall out of place and increased our proximity to the sun, this self-proclaimed genius invented the Ice Hat,” to which a contestant answers: “Who is Conrad Bennish, Junior?” “Correct for… etc.” This puts looks of awe and shock on the Sliders’ faces and it gets even funnier when a bum walks by and says, “That’s a rerun, man… everything’s a rerun since the sun burned up all the satellites…”

The rest of the script relies heavily on character development. As usual, the Professor finds an old magazine released when the Earth fell out of orbit and makes sense of it to the others. He mentions Newton, Kepler’s law, force of momentum and so forth. The Sliders learn the timer won’t allow them off this world for a long time and the end is near. Quinn and friends end up at Quinn’s house, sweating to death in the old boarded-up house. Their doubles are nowhere to be found.

When Quinn watches one of his double’s video diaries, however, they learn Quinn and Bennish worked together on this Earth to try and cross the Einstein-Rosen-Podolsky bridge, unsuccessfully making the roof blow off instead. This doesn’t seem right to Quinn. Upon further reading about this Earth, Arturo finds no literature or evidence of Kepler’s work — he was a failure as well as Newton. As Arturo puts it, “The apple didn’t hit him hard enough on this Earth.” Quinn and Arturo learn the roof blew off because, on this world, Quinn successfully created anti-gravity and didn’t know it. But they need Bennish’s help because he helped build the device.

As Rembrandt starts realizing he may indeed die he wants to find his brother. Conversing with Wade, he reveals Cezanne Brown was one of the original Spinning Tops but Rembrandt fired him because he was jealous but never had the chance to tell him. He wants to see if his brother exists on this world and goes on a mission to find him.

In the meantime, Quinn and Wade are left alone waiting for the Professor and rediscover their love for one another, making out, kissing, etc.

Arturo finds Bennish downtown wearing a white tuxedo and a girl on each arm. He’s some kind of a tycoon at a dinner party bragging about his invention — his Ice Hat lingo is “Stay cool.” After some convincing, mainly Arturo saying he is a genius (but not because of the hat), the Professor tells him the device he and Quinn built on this Earth can truly save the world. Arturo really butters him up and I let the audience know that he was biting his tongue at the same time. Bennish relishes every moment.

Rembrandt has no luck finding Cezanne in the beginning, but does find out that his double was murdered in 1972 and that Cezanne was the lead singer of the Spinning Topps — on this world, he was called “the Jivin’ Man.”.

As Quinn and Wade get deep into conversation, emotions hit the wall — they really love each other.

Meanwhile, Arturo and Bennish are hard at work on the device that will potentially save the Earth. Bennish likes to call Arturo Big Mac a lot during these scenes. When Arturo accidentally shocks himself and becomes frustrated, Bennish fixes the cause of the shock, causing Arturo to be lifted into the air, floating. Bennish seriously becomes excited turning the device off, causing Arturo to land on him. My favorite part is Bennish with Arturo on top of him: “Man, you’re not gonna kiss me, are ya?” “Right now, Mr. Bennish, I would most definitely consider kissing you but we haven’t a moment to spare… we’re going to save the world!”

Back to Rembrandt, he feels lost and hopeless, and winds up at the place he was supposed to be on the day he first slid — Candlestick Park, where he was supposed to sing the anthem. He starts to sing, but halfway through hears clapping; it’s the now homeless Spinning Topps. Slightly delusional, they seem shocked to see him. After a brief reunion that seems sinister, Rembrandt is told where to find Cezanne and they take him to his brother.

Quinn and Wade are uncertain if Arturo’s idea will work and so Quinn proposes to Wade and she says yes!

In another place, Arturo and Bennish are with some government personnel with the device on a military vehicle where they plan to use the necessary power supply to reinforce gravity and hopefully cause the earth to be pulled back where it belongs. Bennish’s women are back with him. While this is happening Quinn and Wade show up to announce the news to the Professor. Remarkably, Bennish announces he can marry them because he’s an ordained minister — being a billionaire has its advantages. They agree on tomorrow. Quinn and Wade happily go away.

Back with Rembrandt, things are not going so well; his brother admits to murdering him before and thinks the heat is playing tricks with his head. Cezanne loads a gun with one bullet and tells Rembrandt he’s really going to kill him. A Spinning Topps chase ensues…

Night falls — which doesn’t last very long FYI — and Arturo activates the device with high expectations. Unfortunately, it causes a power outage everywhere and the machine explodes. Arturo says, “We tried…” and goes on his way.

Arturo feels a little hopeless and disappointed but meets up with Rembrandt, who ultimately gets shot with the one bullet. Arturo holds Rembrandt to die in his arms as the Spinning Tops run away; we see in this moment the friendship they had learned to share. Arturo sheds a tear and calls himself the crying man.

Quinn and Wade are getting married by Bennish the next morning when Arturo shows up. When they ask him where Rembrandt is he lies for their benefit; he’d rather let them enjoy this day.

As Bennish is performing the funniest ceremony of a lifetime, our Sliders slide in. The reason we know it’s our Sliders is because Wade is wearing that YELLOW shirt… and have just two minutes to slide…

Other bits of dialog from the script include:

“On this world, the earth suffered a spontaneous mass increase, causing the planet to be sent on a trajectory towards the sun… good heavens, Mr. Mallory.” – Arturo, describing the situation to Quinn.

“Imagine throwing a pebble at a bowling ball… you can throw the pebble as hard as you would like and it would just bounce off and not move… but throw a boulder at it and it will be forced away… Mr, Brown… this earth is that bowling ball!” – Arturo dumbs it down for Remmy.