"Welcome to the freak show." — Devin. 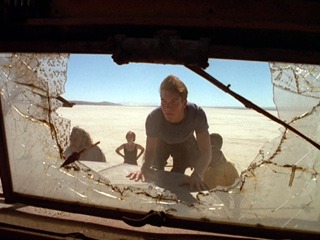 Until this week, there’s been a pretty obvious trend at play: the odd-numbered episodes (Double Cross, Dead Man Sliding, The Guardian) have all been exemplary models of what defines Sliders as a series, while the even-numbered episodes have… erm, not.

So I sat with anticipation for “Desert Storm.” I’d heard the rumors actor Ken Steadman had died while filming this episode and thought it must be something worth watching. I’d also heard that the production had considered, if only briefly, not to air the episode because of Steadman’s death.

If only they had. “Desert Storm” is not only a poor legacy for an actor, it’s also one of the most implausible outings the series has had to date. And after The Dream Masters, that’s saying a lot.

Is Sliders drifting? Oh my, yes. Whereas once the show delved deeply into alternate history (sometimes too deeply, as evidenced by second season’s Time Again and World), the new production team seems satisfied with mindless action and broad characterization. Hopefully these kinks get ironed out soon, because episodes like “Desert Storm” should be a rare exception, not the rule. 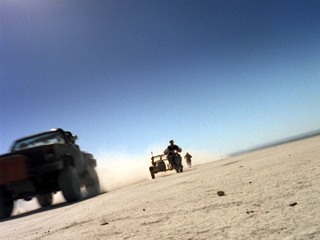 The premise works like a reverse Waterworld — there’s no oceans or water anywhere except for a mythical place called Dryland… er, Aquarius. I say apparently because the maps of the region all show the Great Lakes and the Atlantic, so how North America devolved technologically to something out of Mad Max is beyond my comprehension.

Maybe that’s for the best. I noted earlier Electric Twister Acid Test was bogged down with too much unnecessary alt-history that did nothing to advance the plot, and Matt Dearborn’s minimalist story leaves me to ponder everything else about this story that’s awful instead of what could possibly dry up the earth’s water without destroying humanity.

The Sliders find themselves in another desert region and make their way towards The Sand Pit, an outpost of civilization that not only tolerates slave trade, its system of currency is the old barter system. Tired from the hike and thirsty from the the unforgiving heat, the four try to get some water at a cantina run by Elston Diggs, the bartender previously seen in Double Cross and The Dream Masters. If you can believe that coincidence, just wait until the next one: a captive woman named Devin (Gina Phillips) sends psychic pleas for help to Wade – and she can actually hear them. 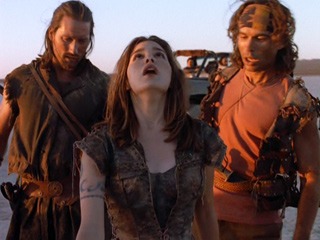 Quinn and Rembrandt to ambush captor Jeremy (Kristofer Linquist) and release Devin, who promptly tells the Sliders that she’ll give them all the water they need. Never one to question a loyalty until it’s too late, they follow Devin until she is reunited with her lover Cutter (Steadman). Jeremy tracks them and accidentally retrieves Wade instead of Devin, leading to all sorts of problems as the two groups try to reconnect.

Cutter’s camp is where this story’s credibility strains to breaking. Not only is Devin psychic, she’s a living divining rod; she slips into trances, clouds form in the atmosphere above her, and she points to where people can dig for an underground aquifer. What the clouds have to do with this aside from pointless CGI is unknown, but for me to accept that a chick wearing cutoff jeans can find water on a desert planet I’d have to be smoking some of Humboldt’s finest.

Wade also decides to take this opportunity to cruise through camp chatting up the fact she’s from a parallel world. “On my world,” she’ll begin a sentence, and Devin (and later Jeremy) doesn’t bat an eye. I don’t know about you, but this kind of news is shocking, even for a woman who is frequently referred to as a Water Witch. Why even mention this? Just say you’re from out of town. Say you’re from one of the other settlements on the maps you’ve seen. Don’t casually mention you’re from a parallel plane of existence. 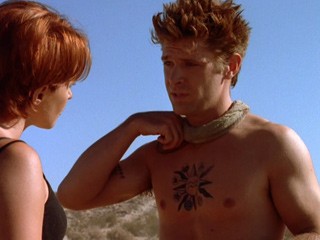 Jeremy tells Wade he’s a good guy, sent from long-lost Aquarius to rescue Devin from Cutter, who murdered her father years ago. Without a beat, Wade accepts this as fact because he takes off his shirt and the two joke their way into being discovered by Quinn, Arturo, and Rembrandt. The five team up and get Devin back from Cutter using more psychic dribble. The gang then heads to Aquarius, where Devin conveniently realizes the truth and abandons Cutter’s lifestyle for good.

Devin learns this through a psychic flashback establishing she and Jeremy aren’t the only dunderheads in Aquarius. Most people dedicated to building a hidden underground society that hordes the last remaining water on Earth would stay out of sight. Not our locals – they mill around the secret entrance like a bunch of teenagers bumming smokes in front of a 7-11. Is it any wonder Cutter slaughters them all without hesitation?

Interestingly, in the flashback, Devin looks like she’s about 10 or 11. Yet we’re supposed to believe that watching her father viciously butchered by an axe to the chest is forgotten? I could buy this if she were much younger, but I’d think being kidnapped by your father’s murderer wouldn’t be so easily dismissed over the course of a few years. I also think that after all the time she’s spent with Cutter, watching him kill and pillage, she could be shocked at this revelation. It should be par for the course by this point. 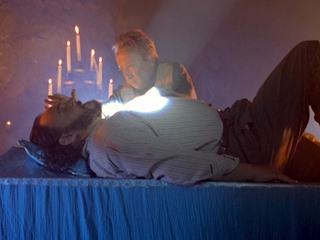 Aquarius defies all logic. Unless there’s some kind of hologram on the top of a biosphere, I’m completely at a loss as to how sunlight gets in. I’m also confused as to how there’s a series of waterfalls or why everyone in the colony manages to dress like an extra from “Flashdance” with the color scheme of Slater’s wardrobe from Saved By the Bell. Attention: baby blue wife-beaters are not appropriate for men to wear under any circumstance. Maybe the climatic change came right after the release of Miami Vice?

Fortunately, at this point we’re treated to some good stuff. Arturo’s illness from The Guardian is a recurring theme in this episode, and Quinn begs Arturo to visit the Master Healer that lives in Aquarius. (Bonus points for the Healer being a midget.) Arturo’s skepticism is well-intentioned and even the Healer admits his alcove’s ambience is nothing more than show. The Healer comes up with some funny lines and advises Arturo conventional science isn’t always the answer to heal, that the mind is a powerful instrument to help as well. I like Arturo’s stubborness, and that he’s less concerned about his death than Quinn is. These touches are the saving grace of the show, but they’re lost in the shuffle between dune buggies and cut-rate CGI. 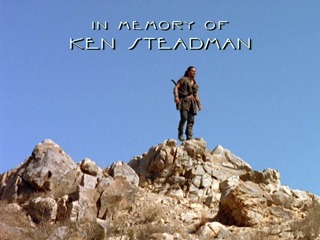 With a few minutes to spare before sliding, the Sliders forgo sliding from this underground paradise and elect to return to the surface. Maybe they realized they needed to pad out a few more minutes until the next commercial break, but the result is an attack by Cutter, who follows them back underground. Oops! Fortunately, Devin wraps up that loose plot thread by wiping Cutter’s memory of Aquarius right before the slide. Those psychic powers sure come in handy!

“Desert Storm” is unwatchable. Even if the rest of the episode was four-star caliber, the acting of Cutter’s Def Leppard reject Wolf makes me want to claw out my eyes and ears with frustration.