"For once, Miss Welles, I have no explanation." — Arturo, commenting on watching a man turn into dragon. 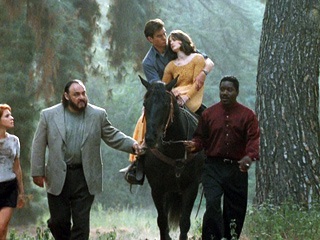 Where is Sliders heading? I don’t know, but after the first two seasons, I’m really left wanting more right now. Earlier seasons were all pretty solid, certainly nothing as one-note as “no-water world.” The move of the production team from Vancouver to Los Angeles has not been kind on this series, and the results are palpable.

I’m not saying this stuff to sour your impression of “Dragonslide.” As a whole I found it to be pretty enjoyable, but it’s definitely an hour of television steeped in the mindset of the third season production team: minimal science fiction and alternate history buttressed by gaudy special effects. With those caveats in mind – and the magic and dragons and crazy Druidic nonsense – this episode also includes powerful themes that attracted me to the show in the first place. Sliders is first and foremost about the characters, and between Wade’s predicament with a lovestruck Rembrandt and Arturo’s fatherly care over Quinn’s obsession with the enchantress Melinda (Michelle Rene Thomas), this episode delivers.

So what’s the plot? It seems resident bad guy Gareth Carr (Gregory Martin) wants to create a demi-human so he can take over its body and live forever. He plans to do this by conjuring a demon to impregnate Melinda, his apprentice. Yeah, it’s pretty retarded, I admit. However, Quinn’s appearance through the wormhole convinces Gareth that he is a Mallory wizard. You see, in the town of Emrys, the Mallory family was a highly regarded clan of mages.

While magic lunacy abounds, “Dragonslide” hits all the right notes when Rembrandt bumps into the double of an old flame (Francoise Robertson). Rembrandt reveals his tempered irritation with sliding to Wade; he had a life before, and seeing mirror images of loved ones doesn’t help him one bit. In a moment of foolishness, he allows Wade to cast a love potion on him so that his ex’s double will fall for him. It backfires, and Rembrandt falls head over heels for Wade. 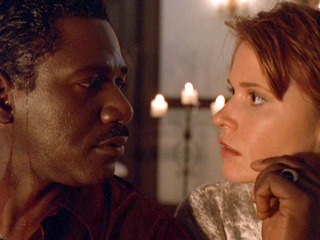 Now, if anyone should feel at home in a world run by Dungeons and Dragons, it’s Wade. She’s revealed her mystical connection in Obsession, Desert Storm and Into the Mystic. She also recounts the origin of her fascination with the occult in this episode — a shy girl with a mouthful of braces will find odd hobbies when she isn’t feeling social. I’m glad that Tony Blake and Paul Jackson play off this logical extension of Wade’s backstory and use it to their advantage.

Rembrandt’s love for Wade is especially touching and realistic. Regardless of the number of parallel cultures the group visits, they are each other’s world, and who better to make a connection with Wade than the other everyman along for the ride? Rembrandt’s speech is beautiful, and it makes you realize how much more of a genuine relationship he has with Wade than she ever had with Quinn. It’s a silent revelation for her, too, opening all kinds of issues that can bear a lot of fruit if they’re developed properly. Cleavant Derricks and Sabrina Lloyd really shine in their performance, especially since it’s a B-story and not integral to the main plot. 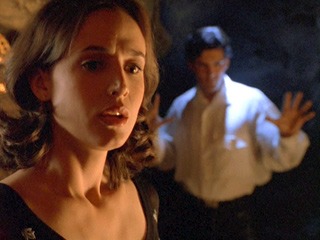 Ah, yes, back to the main plot. Quinn falls for Melinda, as all Mallorys do. Apparently she has some kind of bewitching ability for people of their line and Quinn takes the bait hard. Melinda seduces Quinn with a kiss that drugs him, and when he wakes up, Gareth is standing over him. A moment later and Gareth has taken posession of Quinn’s body, a development that creates at least one humorous byproduct — Jerry O’Connell’s awful faux British accent.

Arturo, ever the skeptic, searches for Quinn and eventually convinces Melinda that they are not from this earth, and that Quinn is mortal. Melinda is obviously upset that she’s lured so many men to their death in service to her evil master — she’s trying to flee him at the outset of the episode — and her true love, Philip Mallory, stays locked away in the castle, a prisoner of Love.

With a little prodding, Arturo convinces Melinda to help him reclaim Quinn’s body, and the two enter a Druidic conclave at night. Gareth-as-Quinn is there, boasting of his immortal body, a claim Arturo immediately dispels by stabbing Quinn in the belly. From there it’s only a hop, skip and jump to Quinn’s sword-wielding finale against a dragon. 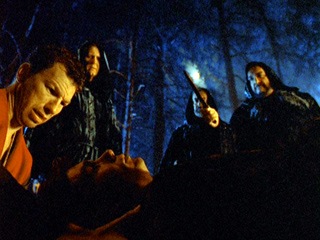 A dragon? Hey, the title had to come from somewhere. Unfortunately, the production team must have gone on a bender to “Papas & Beer” in Mexico the weekend before filming, since the effect of the dragon claw looks like a 5th grader got a little too crazy with some paper mache. The CGI is fairly impressive when Quinn stands off against the dragon, but not impressive enough.

If I’m goofing on this episode so much why am I giving it two and a half stars? Because it’s triteness is overwhelmed by the good intentions that went into it. Arturo and Quinn have a good discussion about the nature of the world they’re in. Arturo is well-suited for this environment; his pompousness forbids him from accepting that there may be places where things are just different. The episode starts with him trying to rationalize a man morphing into a hawk, but at the end he’s as dumbfounded as the rest of us with Gareth’s transformation into the dragon. During all of these shenanigans, the Professor (finally wearing an outfit a little more in style for the type of person he is) has an underlying concern for his protegé that runs deep. 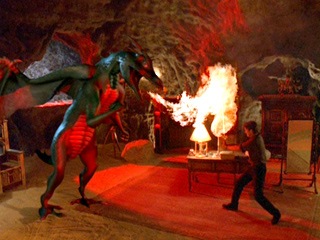 One question, however: Jerry O’Connell’s brother, Charlie, plays Officer O’Hara in this episode while Sean Moynihan plays Philip Mallory. Why? Wouldn’t it make a hell of a lot more sense to have an actual blood relative play the part of Quinn’s family than another guy, especially if they’re cast for the same episode? Maybe Charlie preferred O’Hara’s role since it had more lines… who knows.

All in all, “Dragonslide” is an above average outting. Nothing to write home about (unless, in this case, you’re reviewing it), but not half bad. The positives, to me, definitely outweigh the negatives. I’ve always appreciated Tony Blake and Paul Jackson’s writing on the show thus far (Gillian of the Spirits, Double Cross, Love Gods) and this didn’t leave me rethinking my position. Naturally, I’d like to see more out of this show, but if the downhill trend has already started, episodes like this are a pleasant reminder of Sliders‘ potential.