"Entering this condemned area is not a good idea." — Sign at the Bay Area Rapid Transit station. 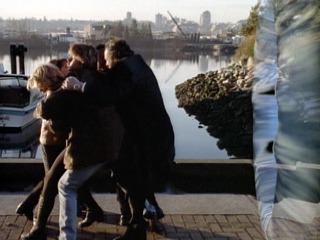 If only that disclaimer had accompanied this episode as well…

This story gets one of the lower ratings I’ve had to dole out because it requires the viewer to make an effort to stick with it, if not stay awake. It’s not suspenseful. It’s not gripping. It’s not all that funny. It’s just there.

“El Sid” takes place in a world where the entire city of San Francisco has been turned into a maximum-security prison. Why would the government throw away such a beautiful city? Because it’s located right on top of a fault line in the earth’s crust. The Big One is coming and if people are going to die, it might as well be undesirables. 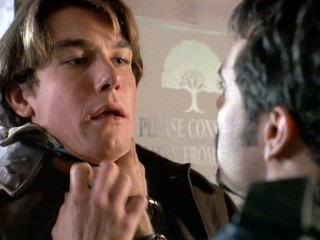 Fortunately, the Sliders picked up a pair of undesirables on the last world — Sid and Michelle. Sid, who probably could have built a solid career as a pro wrestler due to his considerable mic skills and impeccable delivery, is a ne’er do well thug while Michelle is his punching bag of a girlfriend. Quinn, never one to stand idly by when he can rush blindly into a situation, comes to the aid of Michelle when Sid is hunting her down. She slides with them to escape and Sid, being an imbecile, actually follows them into the mysterious swirling hole in the sky.

I now have a confession to make. When Michelle and Sid slid with the Sliders, I was absolutely floored. I almost literally fell off the couch. New Sliders? Wow? Keep in mind I hadn’t seen Luck of the Draw and didn’t know what the heck was going on at the start of Into the Mystic in regards to Ryan, but how I could forget that Diana and David slid with them in Love Gods befuddles me to this day. Nevertheless, I thought I was witnessing something potentially groundbreaking. Wrong, wrong, wrong… 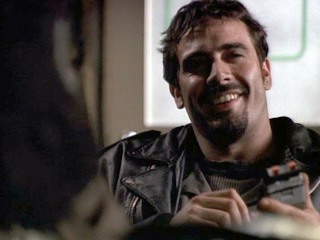 Since the threat of an earthquake isn’t quite enough to drive the episode, an added twist to life in prison is added. Each inmate is teamed with a buddy. It’s up to the buddy to keep tabs on the other to make sure they continue walking the straight and narrow. The incentive for such behavior is shared punishment. If one buddy jaywalks, the other buddy will pay as well. Naturally, Quinn is teamed with Sid. And Sid, being the aforementioned imbecile, immediately resumes his life of crime by knocking over an ATM. I can’t even begin to question the dubious merits of having an ATM inside a prison, but hey, I can only work with what the show provides me.

At this point, it would be a good idea to mention L.J., Sliders‘ answer to Damon Wayans. L.J. is a crony of Sid’s on Sid’s world, but here he’s an affable guy who helps the group adjust to prison life as smoothly as possible. Naturally, L.J. turns on the group in order to get hold of the timer. And they’re all double-crossed by the head “Custodian”, i.e. the warden. It takes a triple cross on the part of Arturo to reclaim the timer and bring this episode to a close. Michelle kills Sid and she slides with the group just as the Big One hits. Michelle joins Ryan, Henry, David and Diana into the great Sliding Abyss and is never heard from again. Seriously, this is a trend that needs to stop now. 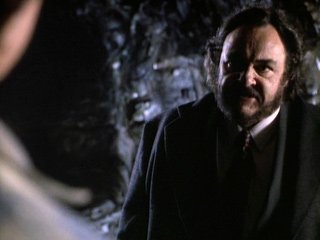 I’d like to accuse this episode of not being well thought out, but that’s not true. The storyline is coherent; it’s just not that engaging. I never find myself caring all that much about Michelle, who takes an awful long time to appreciate the risks her new friends took to save her. And while I do find the Custodian joining forces with Sid to be suspect, I can look at things from the Custodian’s perspective. Why should he have to die with the prisoners when the earthquake comes? If Sid’s friends have a device to help get him out, it’s in his interests to get a hold of it. But he’d still have no use for Sid. Maybe he just couldn’t resist Sid’s irrepressible charm.

There’s not much to report on in terms of character development, although Arturo’s feigned selling out of the team was almost believable. The show has done a good job creating doubts about Arturo’s moral character in the first few episodes. Remember, the role of Professor Arturo was originally intended to be that of the cowardly professor. It is largely thanks to John Rhys-Davies that the character became both leader and moral center of the team throughout the first season. This season the shift is clearly on in favor of turning Quinn into the go-to guy. And to build up Quinn, we need to break the Professor down. Of course, Arturo doesn’t actually betray his companions but it’s starting to look reasonable, isn’t it?

Since that’s the only thing noteworthy in the actual episode to talk about it, let’s take a walk behind the scenes. Though aired fifth, it was produced second. I don’t want to get into the wacky world of second season production codes here, but it is important to show that “El Sid” was not only produced before “Love Gods”, but was intended to air in front of it as well. In the course of this episode, Arturo and Rembrandt revisit the argument held during Luck of the Draw over the dangers of bringing extra mass into the vortex. So thanks to Fox, this scene now has no bearing. After all, didn’t Wade drive a van through the vortex just a few episodes ago? 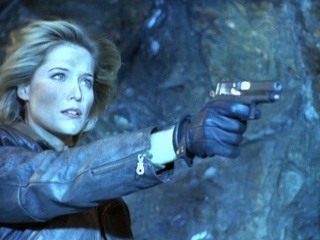 And why is this episode just so slow? Tormé admits that “El Sid” is a two-thirds script stretched over a full hour. There is dead space in this episode. I guess the best comparison I can make is to the Canadian television show Lexx. Due to an apparent lack of script, everyone has to take his or her time getting everywhere. During “El Sid”, we are treated to long lingering shots of the group riding in the trams. L.J. gets to spend way too much time expounding on the rules of the complex. Yeah, it’s back story, but it’s not all that compelling especially when it all boils down to one thing in the end — do something wrong? Get shot.

Despite my lack of interest in this story, I should note that it was fairly popular when it came out. Tormé didn’t quite understand it either and shrugged it off by saying people must really be into earthquakes. But on the Richter scale of entertainment, I’d be hard pressed to rank “El Sid” above a 1.5.