"Oh, right. I just happen to be talking to a friend of yours on the astral plane." — Gillian 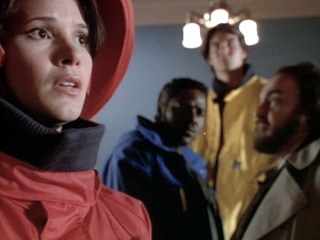 While Sliders was always intended as an ensemble cast, the main focus of the show invariably is Quinn Mallory. Quinn invented the device that got everyone into this mess in the first place and ultimately he is responsible for getting them through each slide. He may not be the leader of the group — that role belongs to the Professor — but he is absolutely critical to their continued success. Should something happen to him, there would be little doubt the rest of the group would be in deep trouble. And such is the premise for one of the better episodes of not only the season, but the series thus far.

We begin on a world engulfed in a storm that has not ceased since the Sliders arrived. A split second after Quinn slides, a bolt of lightning strikes the vortex. Power has always been a concern with sliding. In the pilot, we learned that additional power can make the vortex stronger, but what happens when the wormhole itself is blasted by 1.21 gigawatts of electricity? Strange things indeed. 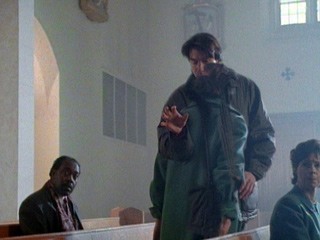 When the four arrive on the other side, only three are visible — Quinn can no longer be seen or heard by the others. He has lost the ability to interact with his surroundings. In essence, he has become a ghost. If losing Quinn isn’t bad enough, the timer has been scorched during the transit between worlds. And to top things off, the world is technophobic and hasn’t advance beyond the technology of the 1950s. As Arturo puts it, “Here we are stuck in a world in the technological stone age with a timer that’s broken that comes from the space age.”

Want more plot? You got it. The Sliders encounter only two people who can help them: Gillian, a societal outcast who can somehow communicate with Quinn, and Michael Mallory, Quinn’s father, a man who traffics in underground technology. Both are flawed individuals but the three must rely upon them if they hope to slide again and restore Quinn to normal space. Only one of them justifies the faith placed in her. 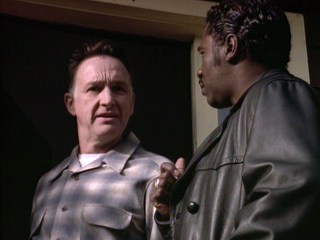 Despite being unable to communicate with the others, this is still a Quinn-centered episode. He knows how to fix the timer, only he can’t find a way to get the information across. His salvation comes in the form of Gillian. Needless to say, she’s not excited about dealing with Quinn as it could get her sent to an institution if people caught her talking to thin air again. The actress playing Gillian does a mighty convincing job of it too in the scenes shot from perspectives other than her own. But Quinn, being the great guy he is, not only gets her to come out of her shell but is able to instill a much needed shot of self-confidence in her. “You’re amazing,” he tells her, a phrase that had been previously been reserved for Wade only. But if Gillian and Quinn’s story is one of friendship, what of Quinn and Wade’s story?

The Quinn/Wade situation, which had seemingly fizzled out, is forced back into the open. Quinn even brings up the Last Days incident. Wade tries to brush it off, but her behavior suggests otherwise. As for Quinn, there’s a nice bit of directorial work that helps get his emotions through to the viewer. In the first scene of the final act, Gillian expresses to Quinn that he’s the first real friend she has had and she can’t even hug him. There is a long shot of Quinn deep in thought before dissolving to Wade. Furthermore, the expression on his face while Rembrandt is chiding Wade over the kiss is also telling; it’s one of the only times in this episode he looks happy.

“Gillian” also treats us to one of the show’s most touching moments when it’s time for the others to slide. As Wade fights back the tears, Quinn puts on his brave face and urges her to leave him behind. It’s almost enough to bring tears to your eyes as he reaches out to touch her one last time; only he is physically unable to. The look on his face after the vortex closes says it all.

And we still have Quinn’s father, who makes his first appearance since the pilot. You could almost accuse the producers of overkill. Please, save some situations for a later episode? Seeing as Quinn can’t communicate with his father anyway, there isn’t a lot of soul searching done. It seems Mr. Mallory is included because the writers needed someone the other three would instinctively trust, only to set them up for the later fall.

Quinn’s not the only character with problems in this episode. The seeds planted in Into the Mystic about Arturo’s feelings of jealousy towards Quinn immediately bear fruit. With Quinn shelved, it falls to Arturo to assume the mantle as technician and his frustration is evident. Handicapped by a lack of material, he is unable to do it alone, which results in him lashing out at the others. “What’s that supposed to mean?” he growls at Rembrandt when he mentions he wished Quinn were there. “The Professor not up to his student’s standards?” He spends much of the episode angry with Quinn, firing back at him when he suggests Arturo raid the power plant to regain the timer. It’s a good dynamic and if there needs to be internal conflict between the characters, this one suits the show well.

This story is oddly without the little humorous touches of alt-history found in most other episodes. Priests being revered as celebrities is mildly amusing as are radio beauty pageants, but there aren’t really any laugh out loud moments. Quinn’s joke in the final scene about no one wearing any clothes? The other three may have laughed heartily, but the rest of us just looked at the screen dumbfounded. I suppose the parody of Taxi Driver would have done more for me had Pavel been behind the wheel. “Are you talking to me my friend?” Fortunately the other emotions involved in “Gillian” compensate. 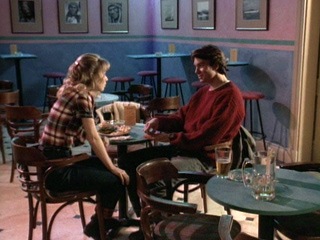 Tragically, the thing that makes this episode so intriguing is also its most glaring weakness. As innovative as the astral plane is, it has also been the source of unending fun for fans with a penchant for parody and sarcasm. How exactly does Quinn survive there? Does he eat, sleep, or need to use the bathroom? Where does he put his coat when he takes it off? How does he manage to manifest himself without falling through to the core of the Earth or just being blown into space itself? How is he able to ride in a taxi? Do you cast a shadow on the astral plane? The fact of the matter is most people look past the glaring scientific problems and give the show props for making the effort. Flubs and continuity problems are infinitely more forgivable if accompanied by a compelling story. Without it, tread carefully.

A few continuity points keep this episode from a full four star rating. Apparently after zapping one member into the astral plane, the vortex feels it owes the Sliders some favors. Its first gift is waiting until after the timer is repaired before requiring to be opened. According to Arturo there are 17 seconds until the window of opportunity. That’s mighty convenient; it’s a good thing traffic was light. Secondly, the vortex remains open for a whopping two and a half minutes, even after Arturo says it only will stay open for about 60 seconds, including a well-marked ten second interval that clearly takes twenty. I don’t really disagree with the director’s vision here as the scene was special, but I did think it worth noting.

If we step outside the box for a moment, I think it’s safe to declare “Gillian of the Spirits” the first breakout episode of the second season. Though produced seventh, it aired third and is in the middle of a group of merely adequate episodes. As Time Goes By (produced 6th, aired last) is the first true creative leap, but since no one got a chance to see it until July, “Gillian” assumes the role. It goes beyond mere alt-history and starts taking on more esoteric concepts — in this case the astral plane. Combined with a gripping storyline and a haunting sense of loss, this episode alone was the reason to keep watching the show until the big episodes came out later in the season.