"The last time I authorized a Decimide intervention, it was up in Monterey, in '95. Seal population up there had exploded. The Coast Guard was called out to blow the little beggars off the pier with high-pressure hoses, but a bunch of tree-huggers in sandals were ripping out their infusers and lying down right in front of the Guard. We sent in two D'ed up Facilitators — just two — and there were hippies and baby seals flying all over that harbor." — Agent Lowell. 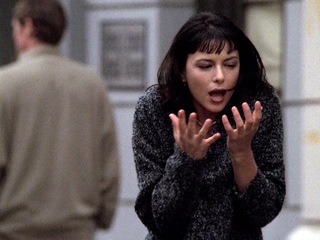 I’ve come to the conclusion Sliders jumped the shark with Dead Man Sliding.*

“Just Say Yes” is the second episode of the fourth season I’ll compare to its third season counterpart, which pits the Sliders against a madcap world of television criminal justice. Dead Man Sliding harkens back to the mandate laid down by Tracy Tormé to blend science fiction with dark, subversive humor, and is the last truly great episode of the FOX era. “Yes” is a reminder of that mandate, making use of doubles, black comedy, and loosely plausible alternate history to create a story that’s fun to watch. It may not be a torchbearer, but it certainly basks in the warm glow of days past.

The premise is simple: what would a world of compulsory drug use look like? Jerry O’Connell tackled a similar situation in his comic Narcotica, but instead of drowning the audience with sorrow and despair, this episode goes for laughs. A fight spilling over from the previous world makes Maggie an immediate target for mood elevation while Colin is the unfortunate (or fortunate, according to Colin) recipient of Quinn’s dart. The drug, a powerful sedative called Tranquol, blisses the two Sliders out, leaving Rembrandt and Quinn to babysit them before the next wormhole opens in nine hours. 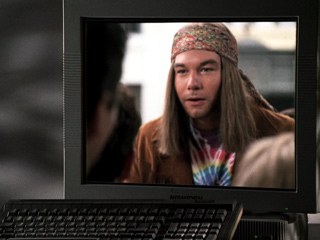 Of course, it’s never that easy. Maggie gets the shakes and is rushed to a local clinic for detox while Colin smells sounds and hears colors. (“I’m one with the universe, man!” he exclaims to an exasperated Rembrandt.) When clinic doctor Helena Malone (Katherine Moffat) doesn’t find an infuser implanted in Maggie’s she calls in the DEA for assistance. Only on this world, DEA stands for drug empowerment, and the guy in the waiting room looks a little too much like Quinn Mallory, notorious anti-drug agitator.

The rest of the story follows Quinn and Rembrandt as they try to extract their friends from drug orientation while being pursued by a licensed drug facilitator named Damon (J. August Richards) and DEA Agent Fletcher Lowell (James Sutorius). Colin is captured chasing the dragon and placed in the same compound as Maggie, a home so vanilla it prompts Quinn to ask where the Beaver is. (It doesn’t hurt that the house they use is the house from Leave it to Beaver.) 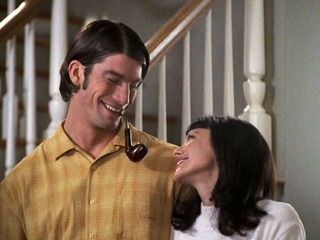 Quinn seems straight-laced enough to hate drugs, but I never figured Rembrandt would be so averse to their use. Maybe it’s because he saw roadies set on fire during his stint on the pop charts? It doesn’t matter, because Maggie and Colin take to it like ducks to water, reading books on pharmacotherapy, baking cookies, and enjoying a nice pipe every now and then. Danny Lux’s score matches the nonsense accurately, eventually venturing into self-parody during these “orientation” scenes.

To balance the comedy of the situation — and what isn’t funny about two adults being forcibly drugged into euphoria? — the episode shows the darker side of drug use with Agent Lowell. To bring Quinn and Rembrandt into custody, he slips Damon a Mickey, a drug called Decimide capable of making PCP look like aspirin. Damon immediately loses all control in his pursuit of our fugitives despite being hit by a car, drum barrels, chains, and a two-story fall. His detox is handled adeptly and written well; Damon’s so accustomed to being happy and worry free he’s forgotten the emotional peaks and valleys that come with being human. 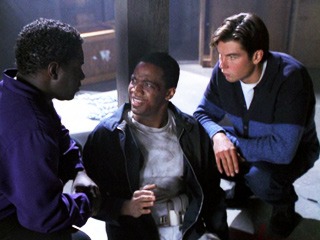 Likewise, Doctor Malone is feeling a crisis of confidence. Giving Damon Decimide undermines her faith in the government to the point where even she develops a tolerance to Tranquol. Lowell seems unconcerned, completely confident that drugs are the only way to keep civilization from crumbling. During the climax of the episode, where Quinn and Rembrandt finally reunite with Maggie and Colin to help cleanse them of medication, Lowell comes unhinged at the thought of these people not wanting to take drugs.

And why shouldn’t he? While watching this episode the viewer sees a society with no crime — doors rarely have locks and facilities aren’t guarded by security systems — and no violence. People walk about and live their lives in peace and happiness. The vocal minority is more or less ignored, and even the worst offenders are placed in housing with no guards or restrictions, just time to adjust to their custom-made drug cocktail. Maybe Lowell’s frantic pursuit of indoctrination isn’t so bad after all, and “Just Say Yes” doesn’t force any conclusions down our throats, even as Quinn vehemently disagrees with the program. 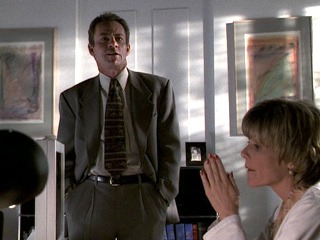 The guest cast does a nice job with their roles; you can see a real gleam in his eye as Sutorious rattles off his wistful soliloquy about victimizing hippies, and Richards and Moffat also excel at people coming to terms with the reality of repeated drug use. Despite what the literature would have their world believe, it’s not dangerous to go without the drugs, and Damon and Doctor Malone wake up to that in the end.

So why does “Just Say Yes” rate only 3 stars instead of something higher? With Dead Man Sliding as the high water mark, it just doesn’t stack up. Sure, the alt-world is a little more plausible and the comic touches with the blazed-out taxi driver are hilarious, but the lone attempt at humor in season three still outperforms. There’s nothing darker than seeing someone whipped on live television while the announcer looks on with unbridled enthusiasm, and few things as clever as Quinn’s “I’m not from your world” defense. That’s not to say “Just Say Yes” is merely good, it’s just got stiff competition. 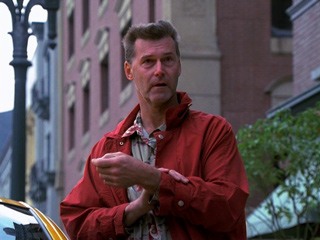 If you’re looking for a solid comic outing, you’ll definitely enjoy “Just Say Yes.” The little touches — naming a drug therapy clinic after Yippie Abbie Hoffman was a nice shout-out — and the weather during filming give this episode a solid second season vibe to it. And at the very least, it’s another of the fourth season’s return to form for the series.

Capable science fiction, excellent use of sliding and doubles, and now the funny is back. Maybe if I raise Dead Man Sliding up to 4 stars, I can bump this one a bit, too.

* I adhere to the “classical” definition of “jump the shark,” which is the instant you know from now on it’s all downhill.