"This is the absolute rock bottom." — Rembrandt, in drag. 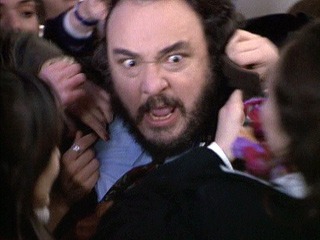 Actually, El Sid would be the absolute rock bottom when it came to second season fare, but “Love Gods” is far from exceptional. It’s not that it’s a bad episode, it just isn’t all that good either. Take an alt-history that makes precious little sense, mix it with a contrived plot device and what more can you really expect? If it weren’t for that quirky Sliders humor, this episode would be a wash.

The key divergence for this world takes place in 1991 when the Gulf War ends in a terrible biological attack. The victims? Men. Whatever this disease is, it goes straight for the Y chromosome. The world male population is decimated and a new cold war erupts between the United States and… Australia. The country with the most males wins while the others will presumably die off. 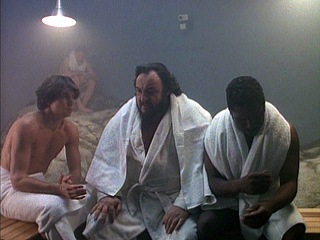 Since they are scarce, all males have been interned in breeding camps where they are subjected to the torture of having sex five to seven times a day. Furthermore, they’re only allowed to have sex with the most beautiful and suitable women, typically younger ones. What on earth would make Quinn, Rembrandt, and Arturo want to run from this seeming paradise? The males are treated as nothing more than meat — Quinn is Grade A, Prime Cut for example. They’re there to do a job; what they want to do with their own lives is irrelevant.

Much of the episode is spent with various people being captured, escaping; re-captured, re-escaping until everything is so confused you don’t know where anyone is anymore. Along the way Rembrandt dresses in drag, Arturo is forced into uncomfortable situations with his Australian captors, and Quinn is left with the moral dilemma of fathering a child he’ll never see. It’s up to Wade, the only person with relative freedom, to get them all together in time for the slide. 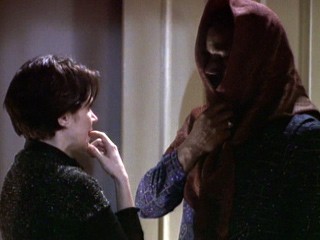 The best thing going for “Love Gods” is its humor. Like Into the Mystic before it, this story is peppered with quotable lines and not just from Arturo. We are treated to the dubious virtues of the “Chia Man” and all the innuendo you can pack into an infomercial. The banter between the cops and the Bureau of Re-Population is especially amusing, as women have replaced the men in the stereotypical pissing match between agencies. And poor Rembrandt is subjected to no end of ridicule when he’s forced to dress as a woman to avoid detection — most of it coming directly from Wade. As she attempts to broker a deal for Arturo with Australia, she says, “Listen to me! Who’s gonna mean more to your handlers back in Canberra — a national treasure or an American transvestite and an overweight Englishman?” 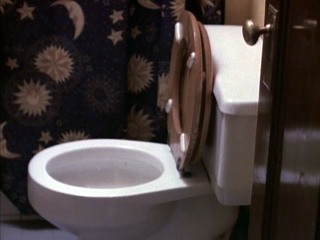 We also see a new side to Wade — a not very funny side. When she arrives at the safe house, she plays a “where’s the timer” trick on them. It just looked so glaringly out of character. But perhaps we’re beginning to see signs of a new Wade. Wade shows no jealousy over Quinn being coveted by other women. It looks like the romance is truly off folks and Wade is going to have to develop new traits and find a different role within the group.

On the other side, Quinn shows quite a bit of moral character in this episode. While Arturo and Rembrandt are quite pleased with their situation initially, Quinn is never comfortable with it. His distaste for the world only grows when Jane Hill, his rescuer and would-be mother to his child, puts pressure on him to do her a little favor. Many 22 year-olds would jump at the chance; not Quinn. He once again proves just how much he is an all-around good guy.

This episode features a few quirks that go toward continuity. The timeline is blown somewhat; Quinn declares they have 59 hours until the slide when the later action proves its closer to 48 hours. Wade, in her daring escape plan, manages to drive a van through the vortex. I repeat, a van. I suppose this isn’t really a problem. After all, didn’t Rembrandt drive his Caddy through before? But after all the hemming and hawing over the structural integrity of the vortex and how much it can take during Luck of the Draw, you’d have to think Wade did something mighty ill advised. Particularly since Quinn had to follow them through. Secondly, they took David and Diana with them? Great! Now we have two more Sliders. How will we pay them off? The same way we paid off Ryan and Henry the Sliding Dog — never mention them again! 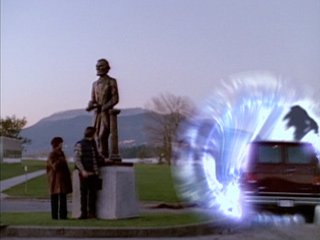 It’s also hard to overlook the glaring problems with the episode’s central premise — half the world population is dead. Wouldn’t this impact society in more than just a breeding inconvenience? This world seems to have managed to handle the transition during this period of mass genocide with relative ease. If we’re to believe the timeline, it was only five years ago that this nightmare began. I would expect more societal upheaval.

Even more ridiculous is the forced breeding. Sure, it’s good for comic effect, but how much of a leap is in vitro fertilization, particularly in such dire circumstances? Arturo himself notes how absurd it is that no one had discovered it. While that aside lets the viewer in that the writers know they’ve made a huge stretch, it doesn’t make it forgivable. 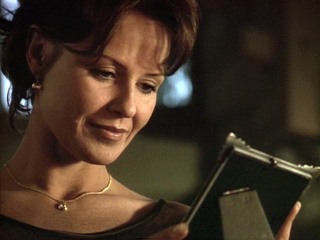 Now why would I harp on this? If the episode is somewhat entertaining, isn’t that enough? Emphatically no. Sliders has built its reputation on not only an hour of fun but also for its thought-provoking nature. When watching an episode like Eggheads or Last Days, you’re treated to a healthy mix of both. The “what if?” nature of the show really shines through and when the hour is over, you can still ask yourself, why isn’t academia revered over athletics? Even more surreal episodes like Into the Mystic take on a poignant topic- the role of pseudoscience in society.

“Love Gods” gives you nothing of the sort. While it may be fun to fantasize about being among the last men on earth, the events leading to that situation are so far-fetched that you’re not likely going to put a lot of thought into it after the episode is done. While there are attempts to bring in additional sub-arcs, such as the effects on monogamy, everything happens in such a rush that nothing becomes fully developed. It’s an OK episode, but it falls short of the previous standards set by all of season one and the season two premiere.