"Seems like we're always taking care of somebody else." — Maggie, to Quinn, after expressing desires to have a child.

Review by Krollak, aka Lloyd Quinto 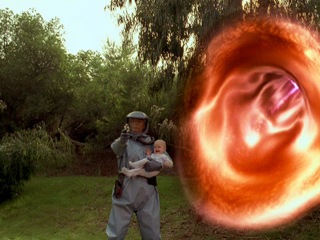 One of the most tragically misunderstood episodes of the television series known as Sliders would have to be the fourth season episode entitled “Mother and Child.” While some may argue — incorrectly — that the episode is an excuse by a power hungry television executive to play power games, I will argue that this particular episode is an example of dynamic and challenging story writing which explores the depth of Kromagg love. The primary objections to this episode are simply rooted in the illogical thought processes of Humans. If your readers had a Kromaggs’ superior brain, they would have seen that this episode has a plethora of cultural, psychological, and sociological themes and subtext. Perhaps if your readers opened their minds and stopped being specists, they would be able to watch this episode objectively. 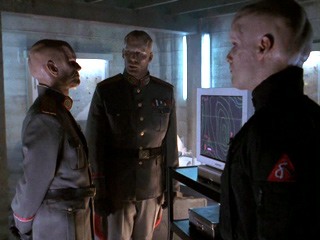 In the opening scenes, the so-called Sliders land on an Earth and interfere in matters that they do not understand nor could comprehend. Indeed, this was the location of a Breeder Camp. While many ill informed people claim that “rapes” occur here, it is a totally false accusation. Kromaggs do not “rape” Humans at these Breeding Camps. Humans at these camps come to learn the true nature and majesty of the Kromagg Dynasty and freely give themselves to the superior Kromagg race. It is here where Humans and Kromaggs are allowed to be themselves and start learning the real truth beyond the deliberate misconceptions and lies of Human propaganda. It is a chance for Kromaggs to show their sensitive and vulnerable side. It is a place to pursue love. These are not “rape” camps, they are private and exclusive resorts where Humans and Kromaggs can explore their desires in a secluded location — away from the prying eyes of those specists who do not believe in cross-species “relations.” It is a place of true freedom and love. In fact, these camps are quite similar to what you Humans use to go to in the summer. There is swimming and boating and archery and even arts and crafts. It is indeed a fun place to visit. Many of our visitors truly enjoy their stay here and would like to come back. It is quite a relaxing location. Only those who are consumed by hate are the ones who cannot see the beauty of these camps. 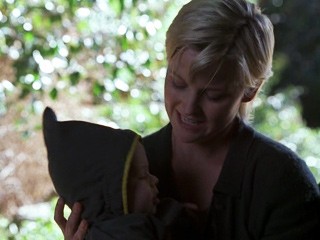 It is this same hate that caused Humans to impose their hatred upon the Kromaggs by using a weapon that resulted in the infertility of most of our beautiful and proud female Kromaggs. Imagine how you would feel if your entire female gender became neutered and unable to bare children. You cannot understand the depth of sadness and despair our people have felt. Now the Kromagg race is on the verge of extinction. Something had to be done. As a race, we had to come to the understanding that we would have to mate with other species to prorogate our own species. We had to over come our own hate to see the beauty of Humanity. If only Humans could do the same. It is a tragedy set upon another tragedy. The people who caused this situation in the first place are the only ones who can help us. We are not evil nor are vicious. Once you get to know us, you will come to love us. Humans who learn this, become more willing and open to love of the Kromagg Dynasty. 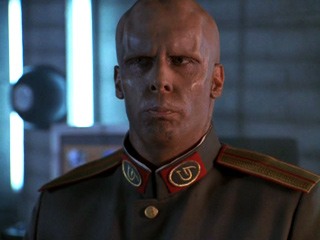 Indeed, there is a great misconception of the Kromagg Dynasty. One of the greatest misconception and promoted by Human propaganda is that we ruthlessly invade and conquer worlds. This is simply false. We free worlds from the chains of corrupt governments and corporations. We give Humans of these worlds proper leadership and goals on how to succeed. We come to each world bringing a message of hope and peace and understanding. Unfortunately, the corrupt governments of these worlds along with greedy corporate overlords, oppose the freedom we bring to each world. Through lies and propaganda, they paint a picture of evil alien thugs bent of global domination. Those are lies. We bring order to the chaos of those worlds. We help these worlds and they become part of a strong federation of planets whose goals are of peace and protection from those who would steal it away from us. Is this so wrong? Why do you choose to hate us? 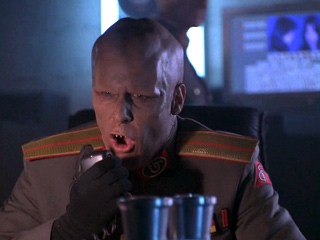 I apologize, this is not so much a review as it is a diatribe about Human misconceptions. Let us go back to the episode. The episode continues and we watch as a selfish Human kidnaps a Humagg and brings it back to her home earth. Did she ask the father? Did she take his feelings into account? Sure, there will be Human apologists who will side with her simply because she is Human. In reality, this is purely and simply kidnapping! That is simply wrong! This Human named Christina is an unfit mother. Does she really think she could raise a child as a single mother? How will she get herself a job and earn money? How will she feed her child and give him a proper education? These are things that the Kromagg Dynasty provide to every Humagg child. In addition to that, we teach our children how to defend themselves from those who would take advantage of them. We teach them structure and the importance of fighting for a just cause. What can this “Christina” woman provide? Nothing. In fact, is it not refreshing to see a male character fighting for his child. That is one of the greatest strength of the Kromagg Dynasty — the love of a child. Both Kromagg fathers and mothers love their child with all their hearts and would travel to countless worlds to save them from a life of utter despair.

In conclusion, Humans have a lot of misconceptions. Kromaggs are a proud race who only want peace and love throughout the Multiverse. The Kromagg Dynasty has generously created multiple summer camps where Humans and Kromaggs can get to learn about each other culture. It is a place Humans and Kromaggs can fall in love. In essence, “Mother and Child” was an episode that I truly love. I, in fact, personally loved Wade Welles several times a day for months on end. Ah, those were good times. So this was a great episode. Perhaps, the best Sliders episode of all time!

2 responses to “Review: Mother and Child”