"You know, Q-Ball, before I started hanging out with you I hardly ever went to jail." — Rembrandt. 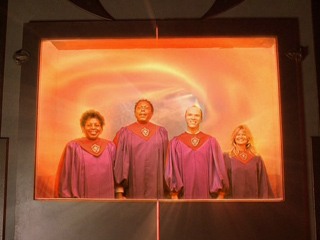 If there’s one thing Sliders never claimed to be, it’s subtle. Production explored a world steeped in Egyptian culture by tossing around giant rotating pyramids and genetically engineered super scarabs, and the writers’ response to introducing villains to the series included a race of sociopathic apes that’ve conquered gravity and a woman who’s not above seducing her male double for the secrets to interdimensional travel.

Hey, I get it; it’s television, a medium that favors blunt-force action over quiet character drama. They’ve got a point to get across and they’ve got 45 minutes to do it, so looking at every issue with a balanced eye just isn’t on the docket. This is certainly the case with “Prophets and Loss,” where plenty of bombs explode and people burn to death and writer Bill Dial’s thoughts on religion in the United States fuel the fire every step of the way.

But it’s not a bad thing. In fact, this episode is a highly entertaining romp and a definite return to form for the series. If Genesis was a reboot to competent storytelling, “Prophets and Loss” is about the return to interesting alt-worlds fans came to expect during the show’s first two seasons.

Make no mistake; you walk away from this episode knowing exactly what the production staff thinks about the fundamentalist movement creeping through Christian communities (hint: it’s not positive). There’s no restraint; religion owns major theme parks, dictates breeding, governs the advance of science, and controls government, while the secular opposition promotes thinking, objectivity, and fairness. Gee, I wonder which side Dial is on? And while the religious commentary is shrouded by the veil of a non-existent belief called The Oracle, it’s pretty clear Judeo-Christian faiths are the ones in the crossfire. Not that they don’t make for a ripe and deserving target. 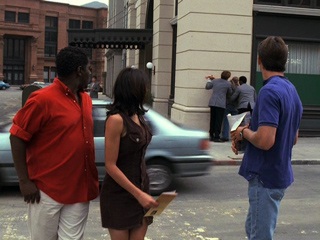 The result is the first fully-realized parallel culture since the third season’s Dead Man Sliding. (When you consider that episode was the third produced that season, Sliders has technically gone one full season of television without exploring its own premise.) Television shows promoting Oracle-sponsored golf tournaments, billboards condemning “Demon Darwin” for his thoughts on evolution, and newspaper articles describing current events are but a few of the elements the writing staff uses to flesh out this ultra-religious society. There’s even an amusing moment when the Sliders walk down the street talking about the Oracle’s legislative restrictions and secret police randomly detain a passerby. (Maybe he had sex without a license?) Those small details go a long way.

There’s also a level of caring I didn’t pick up in Genesis. The costumes are colorful, the music is fun with its faux-inspirational tones, and there’s even some location shooting and an establishing shot of the city! Who rubbed two nickels together to get the crew off the backlot?

The Sliders themselves have some fun. There are some great moments with Quinn as he walks down the street talking about his long-lost brother, the bemusement of the idea visible on his face. Rembrandt’s idea to raid his double’s bank accounts is a clever scene that answers a lot of nagging financial questions, and even Maggie gets in some digs about Quinn and science. Oh, yeah, science; it sounds like Dial has actually read a textbook or two about physics, since there’s an exposition-heavy scene where Quinn spouts more (accurate) technobabble in 2 minutes than he did in the past 2 seasons. 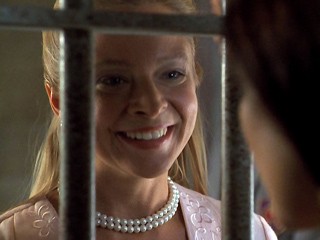 The plot itself is bare-bones: slide into a world dominated by religion, get captured by said religion, escape and help rebel faction, and install the rebel leader to power before sliding. There’s an added twist involving what appears to be sliding technology, but it’s just a way to put the Sliders at odds with Oracle leadership (and indirectly marginalize the movement with its crazed Nazi incineration policy).

Throughout this, Maggie befriends Jane (Katy Boyer), a true believer whose final mission in life is to convert Maggie through any means necessary. She’s the writers’ intended counterpoint in this episode, which is to say she’s a one-note character. Maybe that’s how many fundamentalists are in real life; back in the day when I was one, I recall being pretty intolerant to differences of opinion. I knew I was right in the same way Jane is. She’s totally dedicated to the way of the Oracle, and it pains Maggie to see an otherwise gentle, compassionate person abused by the system through ignorance. The two have good scenes despite the similarity between Maggie and Marta’s conversations in “Genesis.” 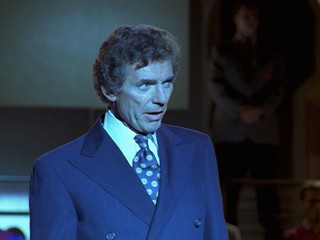 The guest cast is filled out by Cadmus (David Birney) and Gareth (Tim Quill) on the Oracle side, with Samson (Connor Trineer) leading the Rationalist opposition. Samson is very anti-Oracle and Gareth is very pro-Oracle, so they balance one another out, while Cadmus playing the role of tortured soul desperate to promote both the Oracle and a more tolerant way of life. Each actor plays their role well; Trineer is affable and eager to learn more about science, Quill is Pure Evil™ with a hayseed accent, and Birney has enough affect that you buy his heavy conscience.

So why doesn’t this episode merit top marks? The plot, for one, is recycled, and not in that way that all stories have been told in one way or another. It’s recycled in the way that elements are borrowed from the episode that immediately preceded it. I’m talking about the conventional and overused capture-and-escape trope. Considering the number of times the Sliders have been detained, I found it amusing that Quinn still considered the break-in a fresh and unheard-of concept in Genesis. When it happened twice in this episode, it made me wonder what the writers were thinking. The timer’s even stolen. Do we have a running tally for that? 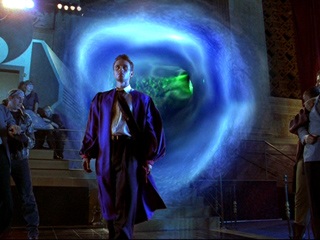 There’s also some monumentally stupid actions on the part of the Sliders. Quinn knows that science is verboten on this world, but when they’re arrested for poking around the Oracle’s technology, he admits he’s a scientist! With an infinite number of responses to that question, would you pick the one that’ll get you thrown in prison? Why even look at the Oracle’s sliding technology? There’s a mode of thinking in television that you don’t ask questions you don’t want to answer, yet Maggie and Rembrandt caution Quinn against breaking and entering against the world’s biggest religion right before doing so. Stupid, stupid, stupid.

I can look past those problems, though, because the result is still fun. Dial creates a world that’s over the top but the reactions of the majority of the players in this little exercise behave rationally and logically. And the use of sliding technology at the end to elevate Samson’s position is interesting if for no other reason than it’s the first use of Dr. Jensen’s upgrade to the timer since being added in The Exodus, part I.

Good character interaction, above-average execution of tired Sliders clichés, and top-notch production values push this one over the top. It’s watchable for both the broad strokes and the little details, a combination that’s been sorely lacking in this show for a long time. Thanks to the crew for bringing it back — I’d started to miss it.