“I know it’s not fair, but personally, I blame this on Mallory.” - Maggie 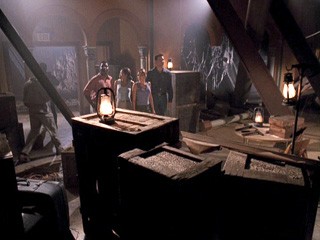 Last week in To Catch a Slider, Sliders unshackled itself from its own rules and finally used the timer in a manner befitting its origins: like a remote control. The sliding tunnel was slowed, fast forwarded, and even paused. Thus emboldened, this week’s effort attacks a central premise that has long been hammered home in the opening credits – the constant of time.

In “Dust,” the Sliders find themselves in what presumably is the year 2000, yet the world they know has been gone for 400 years. This becomes clear as they stumble into an archaeological dig of the Chandler Hotel, which we can’t seem to rid ourselves of even in a post-apocalyptic future. Much like the Pilot’s Tundra World, this world has suffered a catastrophic climate event known as the Cataclysm. It has turned much of what was America into an uninhabitable desert and the civilization we know has been buried under the sands of time. 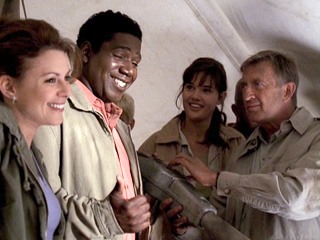 Basically, this episode is fueled off of a single observation: “How can an archaeologist pick up a shred of pottery and create a whole civilization out of the remains?” They can’t possibly know with absolute certainty what happened thousands of years ago; that fertility goddess may just be some primitive notion of pornography. The writers have fun with this idea as the head of the expedition, Professor Jack Bigelow (played by the always capable Ken Jenkins), makes inaccurate claims of the former functions of the Chandler lobby.

However, one joke does not make an episode, and after marveling at beer steins and parking meters gets old, there’s nowhere else for the story to go. From this point on, conflict must be manufactured to get from act to act. Thus we have the overwrought battle between Bigelow and our team over the morality of cutting up the Guardian, a cryogenically frozen man who’s a stand in for a mummy. Since when is disturbing the long dead a major issue with our crew? It’s especially rich coming from Rembrandt and Maggie, who went a-grave-robbin’ way back in Stoker. Of all the things we could fight over, this is weak tea. 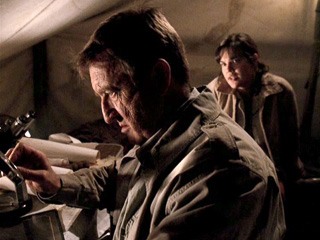 To further the argument that Bigelow is a big meanie, we’re informed that the dig is trespassing on sacred ground. Sacred to whom, you might ask? The Packers. Oh, you mean the same people who are being paid to excavate the tomb? I guess it’s not that sacred. “Do not bring your evil here, but leave your checkbook.”

After Bigelow has had enough of the lying foursome who have accepted his hospitality but spit on him at every turn, he confines them to the tomb of the Guardian while he conducts the autopsy. This creates another manufactured crisis where they must escape to find water. Except they’re due to slide in 14 hours. Sure, it won’t be fun, but it’s far from life threatening in an air conditioned room. Chill out. You’ll be fine. 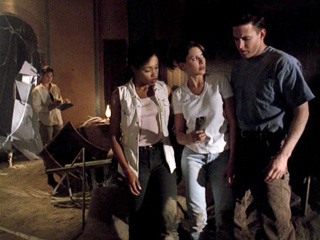 So while the discovery of a cryogenic man – not to mention the fully functional chamber and electrical devices powered by some ancient generator presumably – is a huge find, it pales in comparison to another artifact Diana managed to hide away from Bigelow. Buried in the lobby is a duplicate of the Egyptian timer. The Sliders are not the first set of interdimensional visitors to this world.

It’s this emergence of the second timer where the rules of time break down, at least from the internal continuity of the series up until now. It’s apparent to the viewer (though oddly not to Rembrandt) that we’ve encountered another Van Meer World, last seen in The Guardian. Instead of being 12 years in the past, this Earth has built up a 400 year future gap with its rotational period. The Sliders of this earth were born, lived, and died centuries ago. And yet…who are the people who left that timer behind? 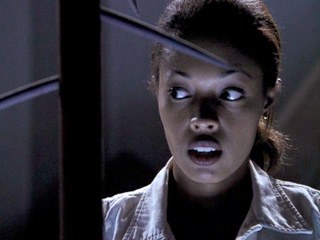 It can’t be a spin-off of our team. Our team is here now. Instead, those Sliders must have originated from a different earth that is also 400 years behind every other earth we’ve ever encountered on the show. Unless they’re Egyptian royalty, they must have also stumbled upon a 400 year Van Meer lagged world run by Egyptians, and probably spent most of their lives hopping betweenVan Meer worlds or visiting a whole lot of practically empty Californias. So technically, I suppose we can justify what we see on screen, but it’s probably more accurate to say it’s just another production screw up.

I’m tempted to say it’s because they just didn’t care, but there may be something else at work here. For a science fiction show, the production team seems very hostile to science. Bigelow is treated like a villain for doing his job. He’s attempting to find out what happened to the world and he’s being thwarted by the superstitious and the incurious. Even Diana, the professional scientist, mocks him. 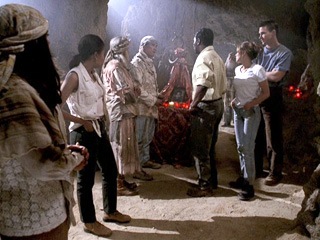 If you hate science this much, then you won’t care about making scientific errors or running roughshod over your own rules. Like US Congressmen, they recoil at the thought of understanding the technology they regulate. Science? That’s for nerds! (Notice how Diana is practically frightened of sexual intimacy? NERD!) Remember, the entire point of this episode is to ridicule archaeologists.  Our production team doesn’t understand it; it must be bull.

And yet at the same time that Bigelow is being ridiculed for wanting to learn, Maggie encourages Rembrandt to mess with the religious beliefs of a tribe erroneously worshiping his ancient double. After all, reinforcing the lie can’t do any more harm. God forbid they be told what really happened. Who wants that bothersome truth? 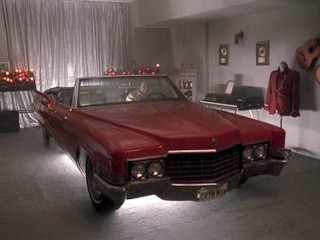 It’s not even clear which Rembrandt is the Voice: the sliding Rembrandt who met his end there 400 years ago, or the native Rembrandt of this earth who would also have died around the same time. We know sliding Rembrandt was there, but did he spend the rest of his life rebuilding his old life while settling down inside the hotel? Or was that shrine already there when he showed up?

Alas, like Professor Bigelow, we’ll never truly know. And shame on us for wanting to know. Let the man rest in peace.