“Some people have way too much time on their hands.” — One of writer Keith Damron’s final attempts to inject “humor” into this dying franchise. 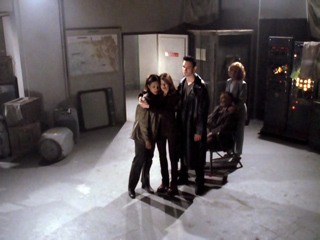 The final words of “The Seer” – and Sliders, in particular – are oddly appropriate. It harkens back to something similar Quinn Mallory says at the end of the pilot, only the context is so different the comparison serves as a perfect litmus test for what’s happened to this series in the past five years. Context, it appears, is everything.

The look on Quinn’s face when he asks his new friends where they’re “going tomorrow” is full of impish curiosity. He realizes the unimaginable wonder behind each parallel universe and he can’t wait to take full advantage of his discovery. Contrast this with Mallory’s muted response to Rembrandt’s final act of sacrifice; it sounds like someone suffering through post-traumatic stress disorder. He knows what they’re going to do – nothing. He’s seen the end result of stepping through the looking glass – pain. The wonder behind sliding is gone, stripped bare and replaced by an ever-expanding roster of unrelatable characters and low-budget storytelling by writers incapable of (and uninterested in) using Sliders’ premise to its full potential. 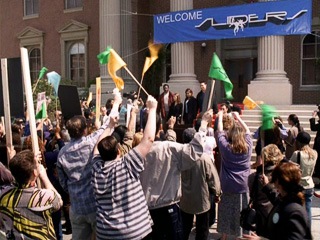 I’ll make the case that “The Seer” is decent. It’s not going to enrage you like “Requiem,” bore you to tears like “The Great Work,” or make you think about how strong the fifth season concept was like “Applied Physics.” It’s a pedestrian outing that, in many ways, encapsulates the Sci-Fi Channel era and serves as a fitting epitaph for the past two seasons.

Does it feature the Chandler set redressed for the umpteenth time? Yes. Does it rely heavily on the use of the back lot? Of course. And, for good measure, it even features a number of nasty digs against the fan base keeping this show on life support.

How do all these gaffes still land “The Seer” two stars, then? For me, it boils down to concept and characterization. Keith Damron has a knack for building quiet character moments into his high-concept scripts, and I found the idea of a world following the Sliders’ exploits with rabid devotion an intriguing one. 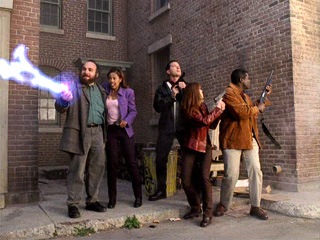 Yes, the Sliders finally land on a world where Sliders is a television show. A world where a poor man’s Professor Arturo slides back into our lives (with a Rickman timer, no less!) for a few moments and fans stage a demonstration in downtown Hill Valley (or Fresno or wherever the production wants the courthouse square to be this week) demanding the show bring back Wade Welles. Our Sliders, now in full command of the coordinates to return them to their respective earths thanks to the chip Geiger gave Diana in “Eye of the Storm,” find themselves here instead. But how?

The welcoming party includes Claire LeBeau and her father Mark, the titular Seer. Thanks to a power-granting heart attack, the Seer has the ability to pierce the dimensional veil and glom on to the adventures of our fearsome foursome. In the wake of a Kromagg invasion on this world, his visions are parlayed into a cult phenomenon providing a level of hope and resistance that ultimately defeated the Dynasty.

More important, the Seer wants the Sliders to stay. Not because it will spike his Nielsen ratings, but because his visions also gave him a grim glimpse into the future; if they leave, the Sliders will die the moment they exit the vortex on the next world. He’s seen the deaths of the Professor and Wade – and he’s never been wrong. 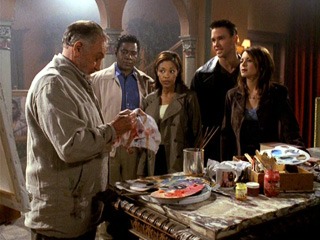 Roy Dotrice (the best part of season four’s embarrassing “Data World”) plays the Seer with great understatement and conviction. As the head of a burgeoning cultural movement, he could be all bombast and ego, but Damron wisely paints LeBeau as genuine and caring. When the Sliders decide he’s hijacked their slide to profit on their appearance, he waves off the accusations as meaningless; the Seer just wants people he’s grown to care about for the past few years to be safe and loved. (I can empathize with that situation.) And, though it pains him, he will help the Sliders leave if that’s what they want.

His daughter, however, is a wolf in sheep’s clothing. Performed by Jennifer Hetrick (you might remember her from the superior “Last Days”), Claire is all about the bottom line. Sure, the Sliders will be celebrities on this world, but that’s of secondary concern to her real goal – establishing a bona fide religion based on the Sliders. If the parallels to L. Ron Hubbard and Scientology aren’t on the nose enough for you, they want to call this new revenue stream Slideology.

Thus the main plot is born. It won’t shatter anyone’s brains, but it’s a functional and new way to generate story for this show succeeding and failing based on how our characters react to these circumstances. Maggie and Mallory chew up the scenery; Rembrandt and Diana, not so much. 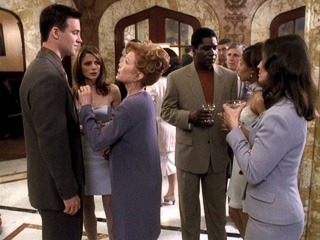 Maggie and Mallory’s stories intersect at Amanda Mallory (a returning Linda Henning), vanilla Quinn’s mom. After her convenient appearance in “Genesis,” we’ve been left to wonder what happened to her. Long story short: the Kromaggs shipped her here as forced labor. This has the unexpected side effect of granting her safe harbor on a world that lets her know, in real time, that her son’s life is slowly slipping away. When she meets Mallory at a Slideology event, she stares vacantly at his eyes, hoping to see something of her Quinn in him. Mallory, understandably, wants nothing to do with her; Mrs. Mallory isn’t his mother, she’s just another unfailing reminder that he’s the wrong Quinn.

Maggie, meanwhile, wants everything to do with her. Wants to bring her with them when they slide. Wants to comfort her. Wants to (and does) call her “Mom.” The bubble universe still looms large in Maggie’s psyche, and this is her final chance to have some part of Quinn in her life. 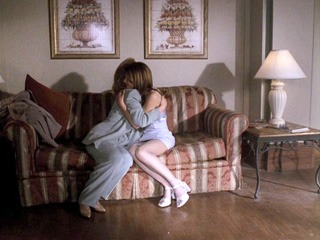 I’ll make a confession: it took me more than ten years to watch the scene between Maggie and Mrs. Mallory. I’d gotten a copy of the script in advance of the episode airing and the scene left a bad taste in my mouth. I didn’t feel the need to watch it, and when I finally sat down and committed to this review, my initial impressions were borne out. I get where the production was going with it, and I appreciate the emotion involved, but Maggie’s analogy with the dead uncle makes no sense, and if you pull it out and plunge right into Mrs. Mallory’s monologue, the scene works much better. Mallory’s moments with his ersatz mom are much more appropriate, and show Robert Floyd is as, if not more, capable of handling these types of scenes than Kari Wuhrer. Too bad he didn’t get more of them throughout this season.

Meanwhile, Diana gets a little bit of character work during the teaser. Sliding has grown on her, and thoughts of getting a Nobel Prize or academic respect on her home world are now secondary to the life of adventure she’s forged in the past year. It’s a poignant conversation she shares with Mallory alone, and it’s all she gets for this episode before plunging into technobabble mode, so if you’re only in this ride for Tembi Locke, you can turn off this episode before the credits roll. 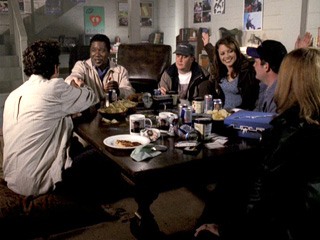 Rembrandt wraps up Sliders as the same stoic believer we’ve grown to know over the past 87 episodes. He knows he’s going home without a magic cure for the Kromagg occupation, but he’s got faith. When they arrive on the Seer’s world, his quest to get home with the weaponized virus concocted there becomes all-consuming. He’s not interested in a cushy lifestyle as a prophet; Rembrandt will inject himself with another person’s blood, fire up a broken Kromagg sliding device, and plunge alone into a decaying vortex if it will save his world. He is a man who will not be denied.

The stakes rise as the Sliders butt heads with the Church of Slideology. First, the organization uses Kromagg technology to cap all outgoing wormholes. When that doesn’t deter our crew, Claire’s henchmen break into the Chandler Hotel to try and steal the timer. When that fails, they destroy it. Undeterred, the Sliders break into Claire’s storehouse to use her sliding technology and she intercepts them, ready to kill in pursuit of the almighty dollar. 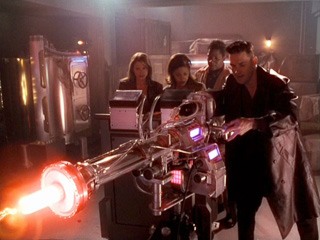 Rembrandt decides to cheat fate. As the Seer lies dying nearby, he steels himself for a trip home, hoping the solo trip will change LeBeau’s vision. Rembrandt slides, and our last shot of Sliders is his friends – all of whom he’s picked up along the way by accident – staring glibly into the distance. There’s no end to the story. No finality, just Maggie holding Diana and Mallory while Mrs. Mallory cradles a dead man a few feet away.

It’s not how Sliders was supposed to end. It certainly not how Quinn Mallory or I envisioned things going when we sat down and began this wild ride together in March of 1995. But we rarely get the end we want.

So, instead of ranting about the ridiculous plot problems, bad science, and continuity-breaking elements that leave this show on a cliffhanger, I’d like to propose a toast. 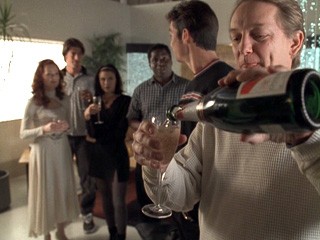 To wherever you live. 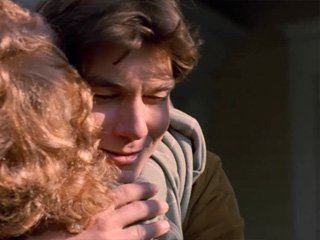 And whatever your struggle. 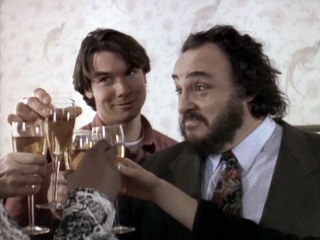 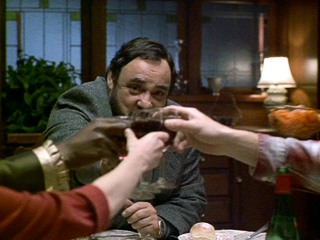 And to the end of a journey. 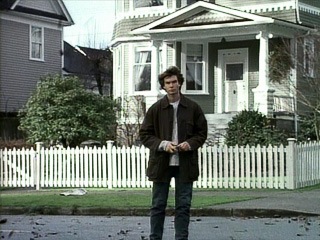 13 responses to “Review: The Seer”