"I think it has something to do with your heavy mass and my curved space." — Maggie. Ha ha. Very punny. Excuse me while I vomit. 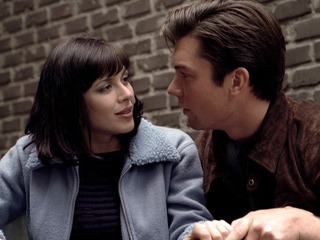 I intensely dislike this episode.

I know, most reviews should have a real introductory paragraph and maybe give you some insight as to what the episode is about or accomplished. I think it’s more important for you to know how much I despise this episode. I’ve been thinking long and hard about what in particular set me off about it, but it’s proved elusive. All I know is I want to take this episode and beat it with a tire iron.

Here’s your plot summary — something goes wrong during the slide and Quinn and Maggie arrive in a separate “bubble universe” of their own creation. That much I can say definitively. Everything else is confused, contradictory, asinine, and/or mind numbingly dull. Let’s go down the line. 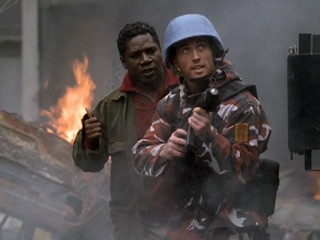 The world Colin and Rembrandt must navigate is at war, but the fog of war is particularly dense. We’ve got Mexicans, Americans, UN Peacekeepers, and god knows what else involved in the fight. The fight is led by Governor Bob Dornan, except California is still part of the United States. Rembrandt gets shot at because he looks Latin, yet all the good guys Rembrandt encounters are of Latin descent. Is this social commentary or bad casting?

After Quinn and Maggie become incapacitated, a visitor from another dimension visits Colin claiming to be his nephew Thomas (the unfortunately named David Dukes). Thomas is here to warn us that the bubble Quinn and Maggie are dying, and if they are saved here, his universe will be destroyed. It would seem to me that it would be in Thomas’s interest to let them die. We all love our parents, but not one of us would sacrifice the universe to give them the chance to be young again in a parallel dimension. Why tell Colin how to erase his existence? 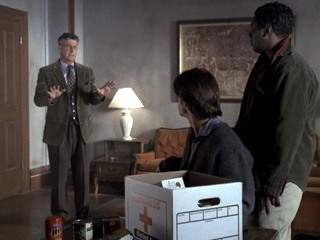 I almost regret Thomas telling us anything at all. His explanation for what happened and how he got here is gibberish. We know it’s gibberish, so when he tries to tie it back to Newton’s Second Law as if it’s all so simple, my reaction is not to nod in understanding but smack him upside the head.

The technology of War World is schizophrenic at best. On the one hand, our reporter friend has a laptop and cellphone; on the other, they’re using wind-up radios. What about the automatic rifles? Are they wind up, too?

However, that’s just nitpicking in comparison to the bubble universe. It’s there we see Quinn and Maggie’s entire life unfold, except it is not their lives. 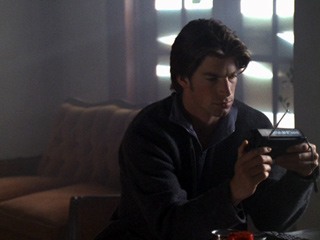 It doesn’t start from the point of intersection, it goes back into the past to create a new back story for them where they are high school sweethearts. Where does this bubble universe begin? Does it go back sixteen billion bubble years all so Quinn and Maggie can make out?

Thomas tells us that Quinn and Maggie dreamed the dimension into existence, but it does not consist solely of them. It’s an entire universe unto itself. What fills it out? Quinn’s a bright guy but there are limits to even his knowledge. If neither one knows of something, can it exist? Such questions are way beyond the scope of the episode, but the audience can’t help but ask them. The bubble as described by Thomas is a wish fulfillment device that doesn’t allow for a fully-realized universe. 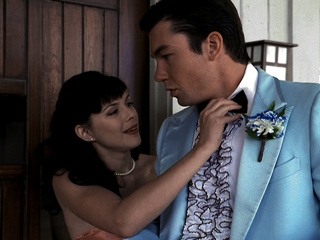 Colin is a smart guy, but he is a product of his environment. I refuse to believe he can readily adapt technology one hundred years more advanced than what he grew up around, particularly half-assed technology of the wind-up variety. Yet Colin is not only able to identify what Thomas is, but he’s also able to get a printout. From what? His crank radio?

Maybe I’ve become hard-hearted and cynical, but Quinn and Maggie’s romance is painful to me. I grow more and more repelled by them with each scene. And while I can understand why new actors were brought in to play elderly Quinn and Maggie, casting should have found people without British accents. Compounded with their failures on the battlefield, casting gets a fat F for their efforts this week.

Speaking of failures, I can’t comprehend why the episode starts over after they callously murder six billion people. Does the bubble universe now have time travel properties as well? If it never existed, there would be no memory of it. But as Quinn’s standing orgasm attests, he remembers everything, including the time spent in War World before he fell ill.

This is easy, as it spans the entire episode. Be it excruciating love scenes between Quinn and Maggie, technobabble with Thomas and Colin, or meandering with Rembrandt though a war zone — nothing’s interesting. Pacing? Nonexistent. Musical score? Casio keyboards spit out better compositions in demo mode. They seem to be of a mind that explosions are exciting. In reality? Sure. But when it happens every week on a television show? Ho-hum. 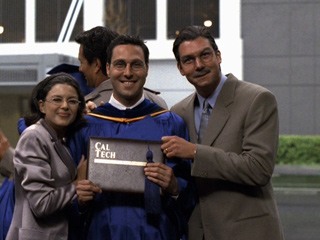 The entirety of the second act is spent with Quinn and Maggie in bed while the others wonder what to do, eventually leading to the dead end of the quarantine. There was a way to skip over all of this, and his name was Thomas Mallory. He’s the magical fix it man with all the answers. Had they brought him in earlier, they could have moved past the mystery and launched into the story, right? Except that’s the problem — there is no story. There is no conflict in the bubble universe. All it’s comprised of are home movies that no one wants to watch. All the conflict ends up manufactured on the war side, which when you get down to it, is completely irrelevant. No wonder nothing seems to work.

If any momentum had ever built up, it would have been stopped by Thomas’s poem. Yeah, that’s right, I’m taking on the beloved poem. Again, maybe I’m a cynic, but it’s hard for me to feel much emotion for anything being read over George Gaynes holding hands with Jerry O’Connell in a wife beater. From what I hear, Thomas got the words wrong anyway.

It will be interesting to see what the fallout from this episode is. Quinn and Maggie now have a lifetime of memories where they were husband and wife. That’s going to be hard to ignore. It not only changes their relationship, but their point of reference has shifted. They know more about the bubble universe than they do about their current lives. This could be very difficult to handle.

Bet you a billion dollars they never bring it up again. If only I could forget.