"You saying we wandered into some kind of roach motel for Sliders?!" — Rembrandt. 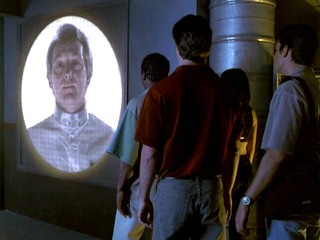 You’ve heard the story: producer Marc Scott Zicree walks past the sets for the just-cancelled Timecop television series, and plucks a Sliders episode out of the ether. “They were just going to tear down these great futuristic sets,” he said. “I walked around them and came up with the storyline. The costumes came from 12 Monkeys and Waterworld. So the episode looks like a feature film, the sets alone cost $500,000.”

That’s great, Mark — but is “Slidecage” any good? The answer is yes.

The origin of “Slidecage” may lay in penny-pinching, but that doesn’t make it any less imaginative or gripping. Quinn and Colin unscramble the coordinates to their home world from microdots given to them in Genesis and Oh Brother, Where Art Thou? and plug the numbers into the timer, expecting a family reunion. 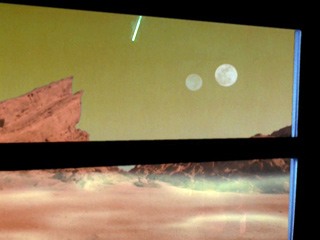 What they get, however, is a labyrinth stationed on a long-dead parallel earth. The air tastes recycled and the food is dispensed from the wall like hamster pellets because they aren’t home, they’re marooned inside a “slidecage” designed by Michael Mallory, the brothers’ father. It’s designed to trap anyone attempting to reach his homeworld by diverting their wormhole into this prison. You can never leave, a decaying recorded message cautions, but food and shelter are provided for the rest of your life. Bonus.

This doesn’t sit well with the Sliders, but before they can digest the information a battle between the slidecage’s long-term residents break out. It’s human versus Kromagg, and it’s vicious. Rembrandt jumps into the situation only to be immediately captured and hauled away. The other three don’t fare much better under human supervision; Maggie’s punishment for questioning the local authority is being pushed out an airlock to suffocate to death. 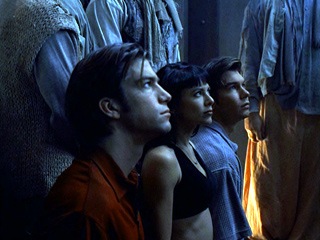 Within the span of 10 minutes the Sliders go from thoughts of homecoming to basic survival. As far as Quinn and Colin know, their friends are dead. That realization marks the end of the road mentally for Quinn. While Colin voices some measure of rebellion, his brother’s pretty much shut down. What can be done? They’re trapped and down two people.

It’s no surprise for the viewer Rembrandt and Maggie are still alive. Rembrandt is a prisoner of Kolitar (Reiner Schone), the leader of the Kromagg force that arrived here in the aftermath of the war, while Maggie is rescued from the outside by Thomas (Kelly Connell), an agoraphobe who prefers the tight confines of the slidecage walls to interpersonal relationships. In a way, they’re both imprisoned.

It’s up to you to decide whether you’d rather be a guest of the Kromagg Dynasty or a pasty introvert, but Rembrandt is assaulted repeatedly by Kolitar while his son Kaldeen (Chad Todhunter) watches with interest. Kaldeen’s never seen a human before so watching one writhe in agony makes for something new. But Kolitar’s attacks aren’t physical, they’re telepathic — he wears down Rembrandt’s defenses and pushes his way into some Kromagg psychological programming no one knew was there. 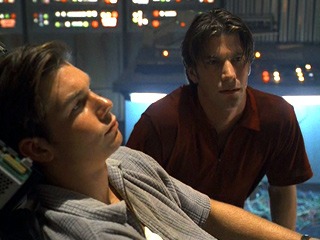 Meanwhile, Quinn investigates the rotting technology around him and discerns the slidecage can be shut down, but it requires a journey through Kromagg-occupied territory. The turf war doesn’t matter to him, but at least getting out of this dump does, so he and Colin brave an escape. Maggie, watching on Thomas’ surveillance cameras, firmly asks to be reunited with her friends. It’s not an easy task for Thomas, who’s avoided human contact for years, but Maggie’s assertiveness brings him out of his shell.

With the pieces in place, the story begins to move them around. Quinn brokers an uneasy truce between the humans and Kromaggs, convincing them to join him in the command center so they can all escape. (This notion is frowned upon by the humans, to say the least.) Arriving, Quinn and Colin find another setback; evacuating the slidecage leaves their homeworld open to attack. They begrudgingly reconfigure the slidecage mechanism to bounce people back to the world they just came from and worry about this problem at a later time. 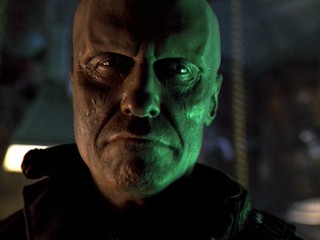 Kolitar has other plans, executing Rembrandt’s kill switch compelling him to murder Quinn. Kaldeen, by now revealed to be a human boy abducted by Kolitar decades ago, helps Rembrandt fight the instructions telepathically. It’s a great scene for three reasons; 1) Quinn’s reaction when his oldest friend attempts to stab him to death, 2) Kolitar’s fascination over Kaldeen’s mental abilities, and 3) Rembrandt’s release of months of pent-up rage over his imprisonment on Earth Prime. Thomas elects to remain behind with Kaldeen, who was born in the slidecage and thus has no world to “bounce” to, and — poof! — everyone’s gone.

The science fiction element of “Slidecage” is the strongest we’ve seen on the show in some time. A parallel world roach motel is high concept yet perfectly within the bounds of a society capable of sliding an entire species off their planet. It makes for a fun exercise by putting the Sliders in a pressure cooker situation, and is a much better follow-up to the Kromaggs than what we saw in Common Ground. They’re shown as amoral, calculating plotters; after all, they anticipated Rembrandt’s escape from Earth Prime and planted Manchurian Candidate-style instructions in his psyche. And while Kolitar appears sympathetic, you never forget the power he wields over Rembrandt when victimizing him. 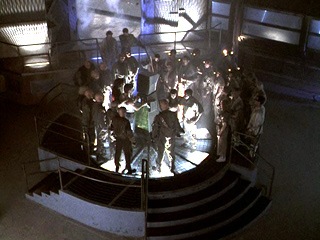 The theme of overcoming personality flaws runs deep in “Slidecage.” Quinn plays his hand at mediation, and even Colin questions Janie, the human leader (Rende Rae Norman), over her selfish and self-defeating motivations. Maggie helps Thomas overcome the guilt of deserting friends on the battlefield (he was a soldier in the Human/Kromagg War) by bringing him back into a social situation, and Rembrandt, who has enough personal issues in this episode all by himself, makes a connection with Kaldeen. There’s a lot of character interplay at work and it succeeds, right down to the mild sneers between the humans and Kromaggs at the end.

Unfortunately, there are a few demerits to hand out, chief among them the Kaldeen/Jules revelation. I get that it’s supposed to show even Kromaggs can have paternal/humanistic feelings for human beings, but it’s not necessary. There’s enough stuff going on in this episode without adding this in, especially since it’s so obvious and telegraphed the only person surprised is Rembrandt.

Between that and Thomas’ out-of-place dialogue (there’s a Thanksgiving Macy’s Day Parade, Times Square, and Beauty and the Beast reruns on Kromagg Prime?), I can’t award “Slidecage” full marks. The atmosphere of the situation works well enough without little in-jokes. Yes, Marc, we also know Armin Shimmerman was supposed to be cast as Thomas before he had to appear on Deep Space Nine. Unfortunately, this isn’t an anecdote viewers need to know before they plunge in.