"Chicago. 1968. The Democratic Convention. Hippies and Yippies alike filled the streets, waging a war of peace against Mayor Daly's thugs. There I was... watching it on TV in my dorm and drinking." — Bill McNeal, Newsradio. 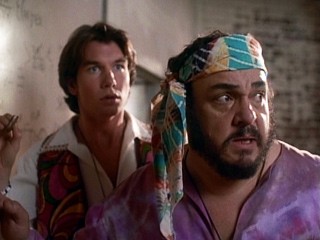 Not ironically, none of these people were a part of the Viet Nam conflict. Why do filmmakers feel the need to inject themselves into a situation they were either too young to participate in or too emotionally impotent to fully realize the situation. We know why Full Metal Jacket, Platoon and Apocalypse Now were made; what did Tormé choose to focus on?

Now, don’t get me wrong, I dig Summer of Love. As an exciting, fast-paced follow-up to the pilot, it really showcases dark humor and the ensemble cast about as well as you’d expect. Just don’t go looking for anything substantive in the hour, because you’re not going to get it. 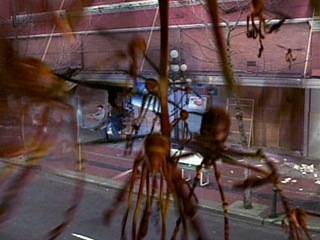 The plot? After a daring escape from a world infested with deadly insects called spiderwasps, the team is split in two; Arturo and Quinn land in the middle of a construction zone and Wade and Rembrandt slide into a hippie commune and are immediately considered gods by the flower children. Are they on the same world? Will they reunite in time to leave? Is there ever any doubt?

Arturo automatically raises his guard to the climate of this San Francisco, which is apparently the center of a movement decrying the U.S. war in Australia. “Different earths, identical mayhem,” he comments to Quinn. Tormé’s use of the alt-history is passable enough to allow him to call it 1995 without it sounding like time travel (something many reviewers of the show seem to confuse the sliding concept with).

While Arturo and Quinn work to repair the timer, Rembrandt visits a home he used to live in and finds that his double lived here and died in the war in Australia. His family is understandably shocked to see him there. Wade is relegated to the background, occasionally offering up astrological advice to the hippies as a way of showing her character is “mystical.”

If I’m so down on this episode, why such a high rating? Because while the plot is flimsy, everything works. 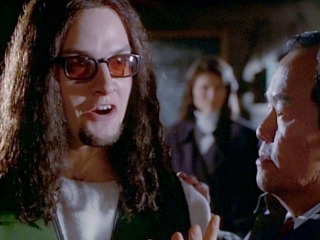 The episode starts off back on Earth Prime; the FBI have tracked down Quinn’s pothead schoolmate Conrad Bennish, Jr. (Jason Gaffney) and want to know where the hell Quinn, the Professor, Wade and Rembrandt have gone. Bennish takes one look at Quinn’s equipment and tells them they’ve gone to a parallel earth.

Immediately, the scene cuts to the Sliders roughly landing on a new world, wearing the same clothes from the pilot (an indication they’ve only been gone a couple days at this point). Everyone’s bitchy and Rembrandt is furious. When are they getting home? he demands. The frustrations mounting reach a peak when they find out this particular world is facing a rather pesky insect problem — Spiderwasps, a hybrid that’s pretty much annihilated the Americas. The Sliders have to leave pronto, but the ensuing escape cuts the wormhole off after Wade and Rembrandt leave. Quinn reinitializes the device and he and Arturo leave, but Wade and Rembrandt are nowhere to be found on the next world. 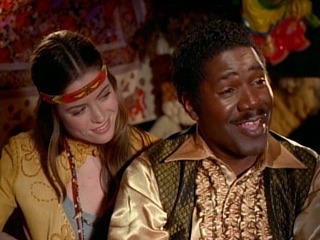 This premise is exactly what the show should be doing as it sets up a whole host of problems. Doing this right at the outset is the right idea, too, since they’ve no idea of the safety of sliding since the timer was corrupted in the pilot. Wade and Rembrandt’s shock that they’re pretty much screwed (they don’t have the timer nor the ability to make a new one) is realistic and understandable.

Arturo and Quinn adjust to the situation pretty quickly — the timer is fried, and the need to hold up and fix it is priority number one. Arturo is steamed he’s stuck on a world filled with mimes running around (I share his sentiment) and is frustrated he has to wear a tie-dyed bandana to help a wound he received. After being harassed by the cops and a right-winged double of Bennish, Quinn and Arturo attempt to hole up in a loft owned by the crackpot Mrs. Tweak (Joy Coghill). 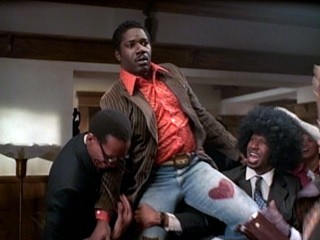 The real comedic meat of this episode, however, deals with Rembrandt. Wandering into his old house, he finds a memorial service for his double, who is lost on the battlefield as a soldier in the U.S. Army. When he arrives, however, all hell breaks loose and the wake becomes a celebration. Cezanne Brown, his brother (Obba Babatunde), congratulates him on not being dead and then Rembrandt’s… um… widow Sharon (Deborah Lacey) and son Rembrandt, Jr. (Arthur Reggie III) enter the picture. Rembrandt thinks he’s found paradise — it doesn’t take long for him to figure out he was damn wrong.

You see, Rembrandt’s double is a bit of a puss — he did all the chores, worshipped his wife like a queen and took heapfuls of abuse from his own son. He probably fought in the Army as a means to get away from such a crummy home life. And guess what? He’s not even dead, although Rembrandt quips that he’d be better off that way as he flees from the double barreled shotgun Sharon has aimed at his ass.

Meanwhile, Quinn and Arturo fix the timer but are mistaken for hippie terrorists by the FBI. They escape, run into Rembrandt and head for the commune with just enough time to pick up Wade before they slide. 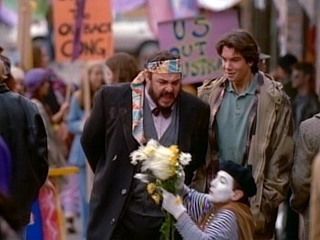 This episode has a manic energy to it that will be difficult to rival. It’s hard to describe because there’s just so much stuff going on. The only one who gets short-changed is the aforementioned Wade, who aside from her entry into Hippie World only gets two strong scenes of dialogue, and those are predicated around teaching the hippies crazy new stuff like astrological signs. They also ask her if Love will win out in the end. How does she know? Cue Quinn’s entrance to defuse the situation.

The humor of this episode hits you like a ton of bricks at times, and there are moments where the comedy is so blunt it has the subtlety of Rosie O’Donnell in a thong (President Oliver North — “Thank God we finally got an honest man in the White House!”). But you know what? It’s funny as hell. And seeing John Rhys-Davies in a tie-dyed muumuu is worth the price of admission alone. 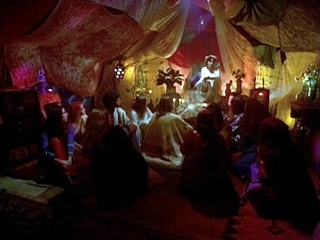 One thing of note: a missing scene that explains what Quinn and Arturo did to the timer was cut because this episode didn’t originally air after the pilot. The scene helps understand why at the beginning Quinn can open a wormhole at will but forever afterwards is forced to wait for a specific random time thanks to the “Helix Spiral.” While it may have confused some people, the episode still stands pretty well on its own without it.

I don’t know why hippies are so inherently funny — personally, I think people who drive rice rockets are infinitely more hilarious than gentle people preaching peace and understanding. Tormé’s “testament” to the 60s comes off remarkably strong humor-wise. Just don’t expect any lasting consequences to come out of these outlandish situations.

5 responses to “Review: Summer of Love”