"The only alternative is you must be stupid beyond belief." — Kromagg General Kronus, before sending said moron out alone on an extremely sensitive mission. 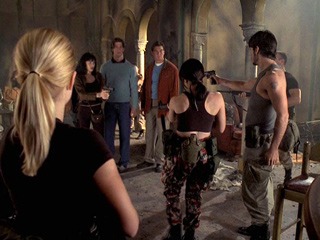 “Fields” is production’s take on The Most Dangerous Game, with Kromaggs taking the place of Richard Connell’s Zaroff and the Sliders splitting the duties (and intelligence, presumably) of Rainsford four ways. The main difference is that, while Rainsford awoke to find himself an unwilling party to sadistic hunt, the Sliders opt in for the adventure when they could lay low and avoid conflict. Hey — why do that when you can blunder and bluster your way through jeopardy? As Maggie articulates, “To survive, you’ve got to go on the offensive.”

That offensive includes strip searching a corpse (watch for the moment when Colin gapes at a Swiss Army knife) with the worst fake arm seen yet on television, and looking surprised at a skeleton floating in a backlot pond. Upon catching a glimpse of their would-be Kromagg executioners, the Sliders investigate. 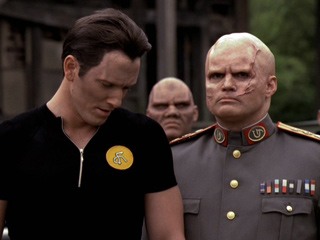 Fortunately, our crew isn’t facing its usual crew of Kromagg goons. We have a new enemy we’ll call Humaggs — an infantry force bred out of the camps where Wade’s been banished. The Humaggs are despised by their Kromagg commanders, seen as an inferior species. To properly indoctrinate them, they have constructed this proving ground where they hone their hunting skills by killing humans abducted from parallel worlds. The best amongst the Humaggs is Kyra (Kristen Dalton); the worst is her friend Incompetus… er, Kryoptus (Scott Decker).

The Kromaggs have no knowledge of Quinn and company and can’t even recognize a timer when they see one, so it’s no surprise they leave it, unexamined, directly outside of Colin’s cell (he’s captured trying to rescue one of the humans “participating” in the game). When Kyra forgets to reactivate Colin’s cell after a less than forceful interrogation, Colin frees himself, though he makes no real attempt at escaping. Like I said, there’s a lot of stupid in this episode, and it’s getting contagious. 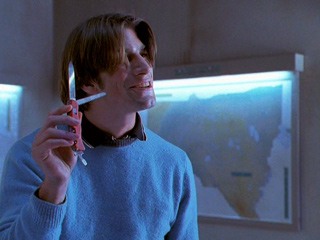 The Humaggs deploy to capture the rest of the Sliders only to have the Sliders capture Kyra. It appears Maggie’s favorite strategy of divide, divide, and get captured is part of the Humagg handbook as well. Rembrandt is clipped in the firefight by a radioactive weapon, which quickly sets to work on killing him. Before he can die, or before the viewer can really accept the possibility that he might die, Quinn gets Kyra in touch with her humanity and she uses the Kromagg healing power (seen in Asylum) to save Remmy.

Meanwhile, Kryoptus is chewed out for not only losing Kyra, but allowing Colin to escape as well. (Colin must have been waiting to make Kryoptus look like a fool before bolting.) Kryoptus is given one last chance to prove his valor. Driven by his love for Kyra, Kryoptus becomes a killing machine, icing three humans and putting the pressure on the Sliders. But in the end, he lets them all escape even though Colin opened the vortex behind Kryoptus where he could best protect it. He kills Kyra for her betrayal, and is promoted to the status of elite warrior. I give him two weeks before he dies in a fragging incident. 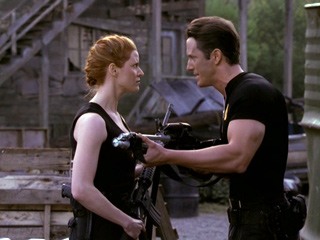 So, aside from using the Chandler Hotel set as the human’s hideout, what else went wrong with such a marvelously thought out story? For starters, the focus is on the wrong group of characters. It’s my opinion that every episode of Sliders should focus on at least one Slider. This story centers on Kyra and Kryoptus, two characters I neither know nor care about. They are quite literally presented to us as robots; you could rename them State of the Art and get much of the same reactions. They’re ignorant automatons, programmed to hunt humans, a task they’re not particularly adept at.

Kyra, despite her high kill rate, is a terrible soldier. When captured, she attempts to kill herself only after dropping her weapon. When threatened with harm, she immediately talks. If this is the best the Kromaggs can throw at humanity, this war should be over as soon as the last generation of legitimate Kromaggs passes on.

I’m not even sure about the love story between the two. It’s more of a high school crush. Yet even then, at no point does Kyra plead with Maggie and Quinn to stop firing on Kryoptus when he pursues them. Where’s the love, Kyra? 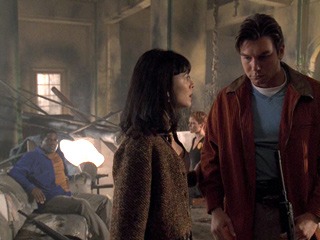 With so much focus misplaced on the Humaggs, a storyline with great potential gets thrown by the wayside — Rembrandt’s life threatening injury. If this review glosses it over, it’s because the episode does as well. It’s compressed into a small scene bridging the third and fourth acts. There are some good moments here, particularly by Jerry O’Connell. Quinn has enough knowledge of elements to know a nobelium weapon is lethal and his face can’t hide it. Still, there’s that sense of denial intrinsic to his character that fights its way to the surface. As he and Maggie plead with him to hold on, Rembrandt slips away. It should be poignant, but it just doesn’t pop.

I blame it largely on the weak to non-existent scoring. While I like these actors, they are not titans of the stage and they often need help from production. A strong score can trigger the emotions in viewers that the actors are attempting to convey. Sliders doesn’t do that any more. Instead, all we get is Quinn trying to call Rembrandt back… from the commercial break.

Though the story is a bust, we do advance the season arc a little bit. At least we now know what the Kromaggs are up to in the breeding camps. I was also pleased to see Quinn is still aware that his best friend is trapped in one of those camps. We also learn what the great weapon used to defeat the Kromaggs does — it sterilizes them, which admittedly, is not as much fun as the vaporizing weapon from Common Ground. Why, again, didn’t we use this as a new ultimate weapon? Oh yeah, our crew is kind of stupid. Just like this episode.