"The universe has no conscience, so we have to. Let it in, pal. You blew it." — Quinn, to his double. 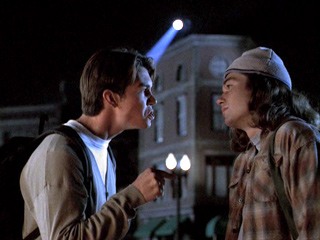 On a parallel world with a bad case of overpopulation, Quinn Mallory is arguing with himself. An accident 3 years ago merged the populations of two earths onto one, and the cause of the accident — Quinn’s double — doesn’t seem to care one bit. He’s more concerned with proving his greatness than the fates of 11 billion souls, and it’s pushed our Quinn to the breaking point.

“The universe has risks,” his reflection says with a sigh. The original snaps… and genuinely considers abandoning his doppelganger to the bedlam around him. But Quinn is right — it’s the moral compass of man that steers the universe. After a hasty (and dangerous rescue), Quinn tells his double he came back for who he’d be if didn’t.

“World Killer” is a tour de force for Sliders, easily the most important and character-driven episode since The Guardian and the best use of the show’s concept in years. Marc Scott Zicree has written a fantastic script, and the actors — Jerry O’Connell in particular — deliver far beyond what we’ve come to expect. Mark my words: this will go down as one of the finest hours in the show’s run. Period. 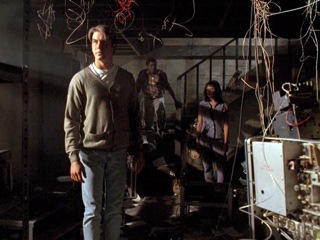 Instead of overblown alternate societies or flashy action-adventure nonsense, “World Killer’s” strength lies in its simple premise: what if Quinn’s original experiment slid everyone but him to another world? The Sliders arrive in a San Francisco rotting in the aftermath — empty cars, a devastated landscape, and no humans (Alan Weisman would no doubt salivate over this turn of events). With a week to spare, the Sliders decide to visit the Mallory homestead for any clues to the mass extinction.

What they find instead is a monument to Quinn’s self-consciousness. Feelings of inadequacy surface when Maggie and Rembrandt point out prestigious awards the native Quinn won, and an investigation of the wrecked basement yields only more disappointment. On top of everything that’s happened since the death of the Professor, Quinn still can’t reconfigure the timer to bring him to his brother. The burden of responsibility weighs heavily on his shoulders, and when he dismisses his friends for a moment alone, it’s clear the weight is about to topple him. 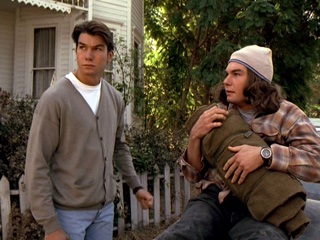 Enter Alt-Quinn, the lone wanderer who represents everything our Quinn is not. Brash, conceited, and free from commitments, Quinn is initially jealous of his double’s abilities, even though that double is also a paranoid, stuttering mess — more or less what you’d expect from someone who’s gone years without any human contact. O’Connell does a great job of creating this particular doppelganger of Quinn; the facial ticks and lack of socialization are very convincing. Zicree has said he told Jerry to portray this Quinn as the world’s biggest 12-year-old, and he succeeds.

The reunion is not a happy one; Alt-Quinn immediately becomes protective over his smarts, telling the Sliders there’s no way they can fix the problem. “It’s impossible,” he barks, to which Rembrandt replies, “every now and then, we manage to do the impossible.” It’s inconceivable to Alt-Quinn someone might be better than him, a theme reinforced many times over the course of the episode. Quinn looks at the personality defects as those thrust upon someone in isolation, but Rembrandt says it best: Alt-Quinn sleeps through what keeps Quinn up at night. 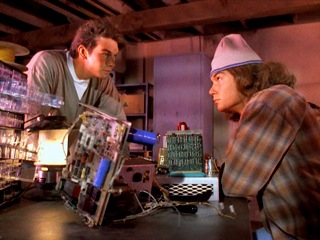 Eventually, the Sliders convince Alt-Quinn to recreate the experiment and slide to the world where everyone ended up. What they find is a world in chaos; anarchy, resource wars, and regional warlords vying for power through martial rule. Quinn’s house has become a refuge run by Sister Celine (Rose Portillo) and her double. (To hammer home the duality theme of “World Killer,” one’s a pacifist while the other brandishes a shotgun.) After one of the sisters explains the situation using Noah’s Ark in an excellent analogy, Alt-Quinn is more in awe of what he’s done than in the consequences.

The rest of “World Killer” is a character breakdown of the Quinns, Maggie, and the Sisters Celine to a lesser extent. While they continue their quest to repair and power up Alt-Quinn’s Slidewave device, Quinn is forced to reconcile what he sees in the mirror on a daily basis. The nuns have dealt with it for years, learning to accept and live with their unique flaws, but Alt-Quinn is such an insufferable ass Quinn’s frustration continues to mount. How do you get through to someone like that? Maggie eases the struggle with some well-timed lectures that help ease her own daddy issues in the process. 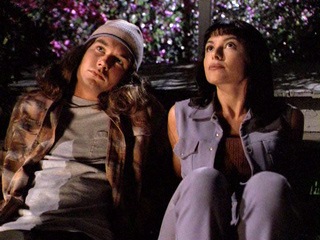 The conclusion of the episode is never in doubt — the Sliders rescue both worlds by plugging the Slidewave into a power source (conveniently converted from energy plant to latter-day fortress) — but that’s okay, because in the end the journey is more about Quinn coming to terms with who he is, and helping Alt-Quinn become a more selfless individual. Granted, it takes a gunshot wound to the shoulder to wake him up to those around him, but by the end he’s taking responsibility for his actions, even helping the Sliders adjust the timer for a little family reunion.

In fairness, there’s some eye-rolling with regard to the raid on the power facility — it seems like standard action fare given what leads up to it — but I’m willing to forgive these transgressions if for no other reason than it gives the set designers another way to redress the Chandler lobby. Walter Olkewicz is also very effective as the Boss, someone who took advantage of being interdimensionally displaced by becoming the ruler of what’s left of San Francisco.

I’ve glossed over a lot, but trust me — this is one you want to enjoy on your own. From Maggie’s gentle admonitions of Alt-Quinn’s selfishness to the clever re-imagining of Quinn’s stardust story in The Guardian to Rembrandt’s worry over breaking up families brought together by the Slidewave, this is television that respects its audience and treats it with intelligence, and I appreciate it.

Chances are, you will, too.