I Was Wrong. You Were Wrong.
(Applied Physics) 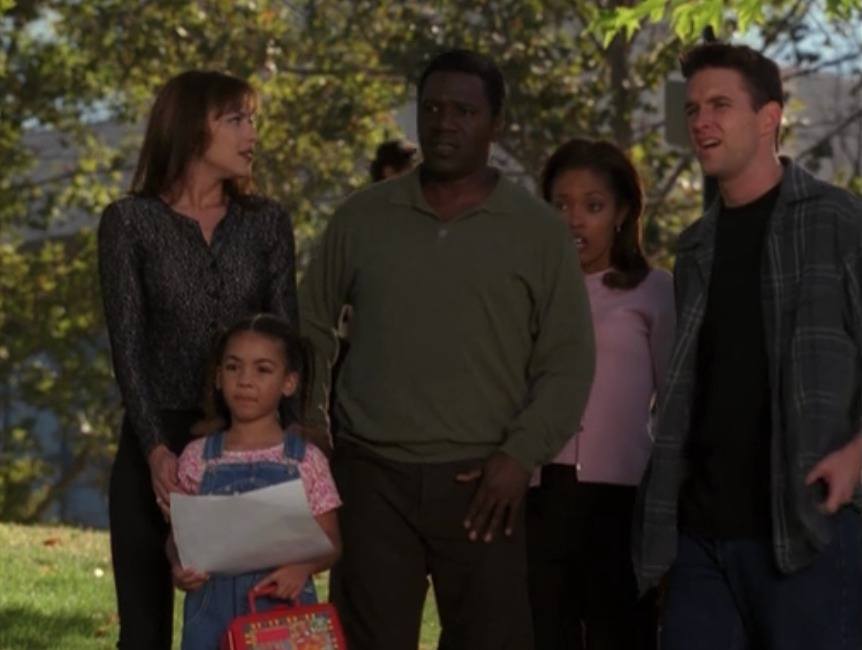 So that’s new— a hook that’s based on something human.

Yes, I guess it’s still based in the sci-fi conceit of the show, but we’re basing it on human concerns. It’s an amazing teaser, unlike so much that’s come before. Doubles, so often on this show, are forces of evil. Either forces of evil, or just forces of darkness. I think the only time we’ve met a double who wasn’t downright evil was Wade’s double in “Double Cross,” and she was willing to (probably) take money to impersonate someone in order to get the team in danger (Colin’s double in “Lipschitz Live” doesn’t count, he’s too stupid). Doubles of people the team knows fare better— but the only case of that is really Daelin Richards. Remember Colin’s ‘girlfriend’ in “O Brother, Where Art Thou?” Also pretty much evil.

So when, finally, we are encountered with a double who is not only not-evil, but also just plain good we have to pause. It’s a spit take, kind of. And what’s funny is that the reactions that are had by Diana and us, the audience, are so wildly different. We’re both shocked, sure. But she’s shocked because her double has a child, and is poorer and dumbed than she is (more on that choice of words later). We’re shocked because we’re seeing a double who isn’t instantly trying to kill us. 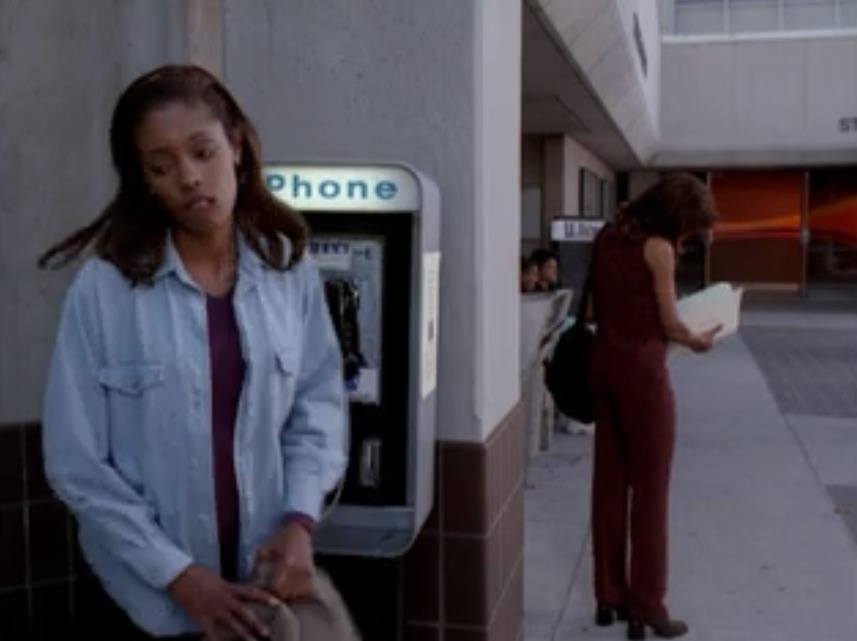 This difference between character reaction and audience reaction is the secret gold that drives “Applied Physics” to be a new contender for “best episode that isn’t ‘Luck of the Draw.'” Because beneath a wildly dense script lies a secret battle against that show Sliders we used to watch. This week, Traversers means War. 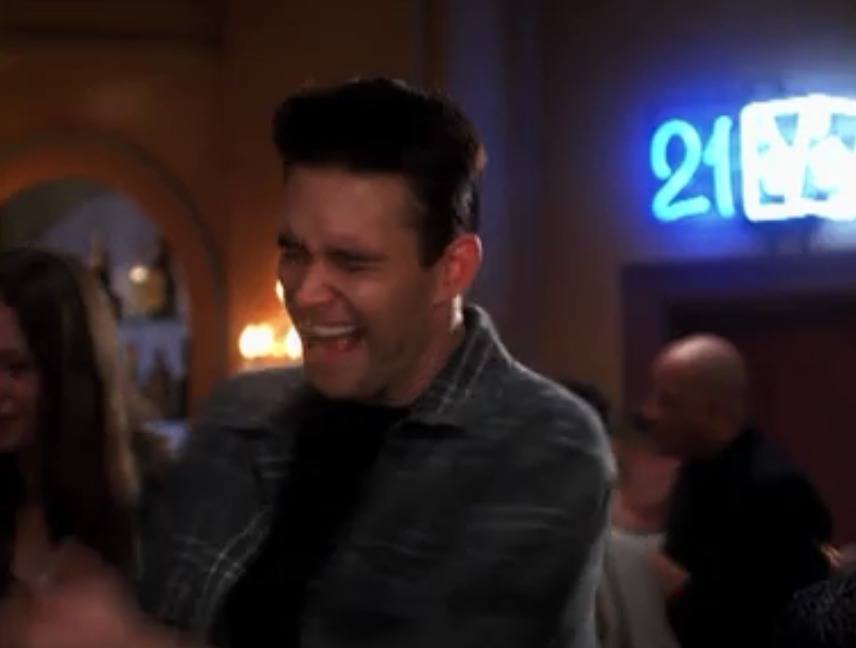 AHH! Maggie! I just got a terrible vision of a future where all I do is make cocktails!

If this was last season, Diana’s story would be the only story, and it would be boring. But here we’re treated to two equally powerful stories— the Question of Quinn. It’s a complex one, of course. But again, it’s framed in humanity. Because it’s clear that the choice— for Maggie & Rembrandt— would be Quinn, and not Mallory. Of course it would. But there’s an interesting dynamic here— because if Quinn reasserts himself, so does the original show. The tension here is between this weird new show called Traversers, and the show we knew called Sliders. If Quinn comes back, Traversers ends.

Yet with a teaser like this one, we’re invited to prefer Traversers. On the one hand, this is obvious. No sane TV Creator is going to ask you to loathe their own creation (until “The Seer,” that is). On the other hand, Traversers is a show that so far seems more in tone with the concerns of Season One and Two-era Sliders. The Human Element is at the forefront, and the sci-fi mumbo jumbo is backseated.

So “Applied Physics” puts us in the curious position of rooting for the end of our show so that it can be replaced with… our show. Season Five, then, is an exorcism against the sins of Season Four (and yes, this is largely the same tack Philip Sandifer took with his approach to the Colin Baker era of Doctor Who). What’s interesting, though, is that while Season Five actively tries to show us how wrong the show had become, it also takes pains to remind us that Season Four really happened. 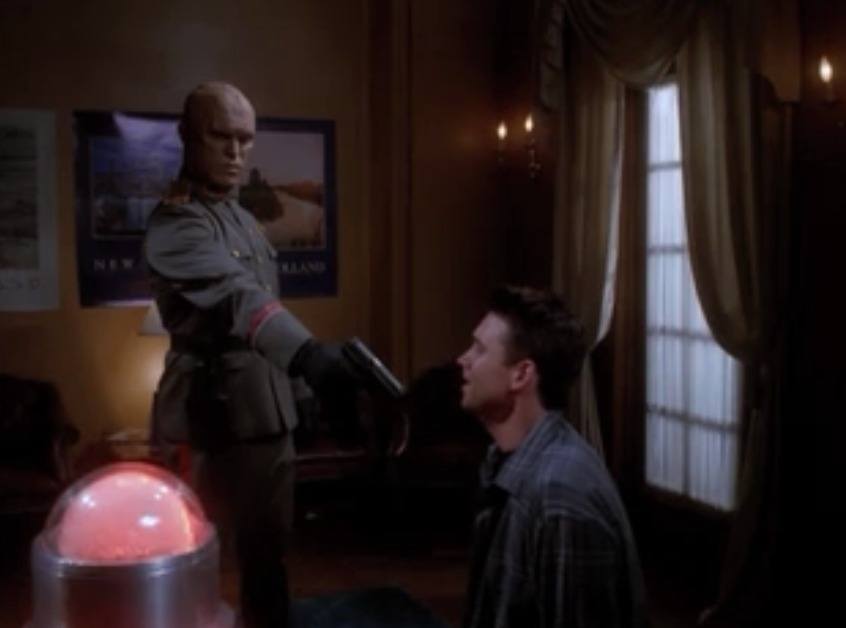 Remember when people on this show were actually afraid of Kromaggs? Now Kromaggs are like… sand or something.

The conceit of the “Travel Agency,” basically just a psychic holodeck, is an impossible sci-fi dream. But I’m willing to accept it in the service of the scene it brings us— the Kromagg Hologram. Mallory is horrified at what the machine takes from Quinn’s memories. Which he should be— Quinn’s memories are nightmares. The entire show was a nightmare, as I’ve long argued.

Later, Maggie tries to assuage his shock with a run of the mill patented Sliding Tagline— “it’s not just a job, it’s an adventure!” And Mallory won’t have it. And good for him— it’s a bullshit thing to say. It forces Maggie to actually talk to him instead of relying on catchphrases. Once again, this new show reveals that the M.O. of the old show was total amoral crap.

And since Maggie has to open up to Mallory, she actually reveals more about herself than we’ve heard in ages. We’re reminded that Maggie is actually a tragic character— we’ve been reminded about Dead Steven Jensen now and then, but here we’re reminded that Pulsar World is also dead and gone. So it really does effect her if Quinn is gone— it’s almost a breaking point for her, one too many loved ones dead. It also has the byproduct of excusing “Roads Taken,” which is certainly an impressive feat.

But interestingly, Maggie uses “Roads Taken” for selfishness— she will actually stop and nothing to get rid of Mallory. The reassert her life, her status quo, to reinstate the original show, death is necessary. But that’s wrong, isn’t it? We shouldn’t have to watch someone die just so we can hang out with Jerry O’Connell, should we? Is that what we want? What is an appropriate cost to ‘fix’ a life, whether it’s your own or someone else’s? 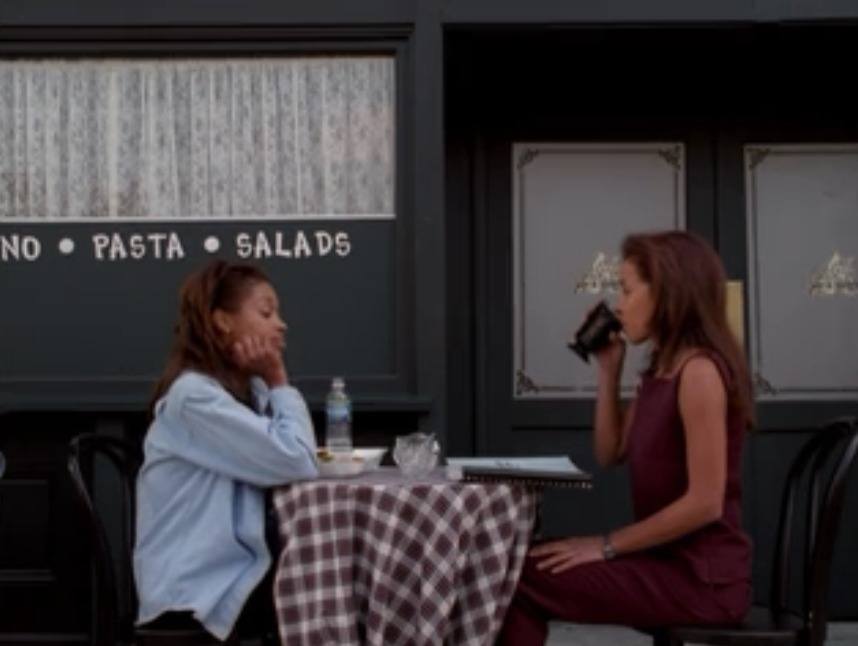 This scene is great and shows that Tembi Locke actually has range. But it’s also bad because “our” Diana is marked here as kind of a shitty judgmental person. THE SWORD HAS TWO EDGES.

And that’s where Diana’s story comes in. Diana who reacts horribly to the promise of Sliders. After all, the promise of the original series wasn’t just that anything was possible in a parallel dimension, it was that anything was possible and you could change it. So Diana acts upon this— to her, seeing her double as a single mom who is down on her luck is as bad as world where the russians rule America. So she acts to change it. And she does— she destroys that life, she “fixes” it, she gives her double wealth and power and responsibility and takes away that pesky little daughter thing that was giving her so much grief.  Of course, the last was by accident, buy what did she expect? You can’t just “take out the bad” and expect only good to remain— that isn’t how life works.

What’s happening here is that Diana corrupts her double’s universe with the spirit of the original Sliders. And it’s horrible, it’s awful. More importantly, it’s wrong. The difference between this and the unchecked cynicism of, say, “The Dying Fields” is that there is choice involved. The sad story of Kyra & Kryoptus was shown to be inevitable— it was always going to end up that way. Here there was choice— Diana’s— and it is shown to be the absolute wrong choice. 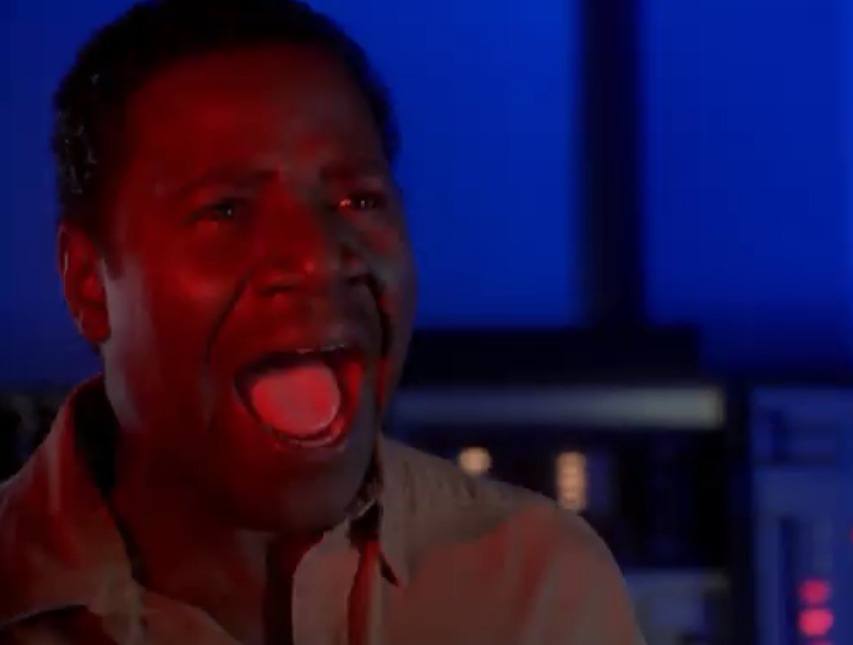 “Y’all want exact change, is that it?”

It is Rembrandt who tells her this. He’s the only person who could. He’s the one character who has survived this nonsense. He’s literally seen it all, and he’s changed. Rembrandt doesn’t represent the show that used to be— he is the one person that does not embody the evils of Season Four, despite the fact that this newfound sagely wisdom is directly a result of those evils. To return to the show Sliders that used to be, you would have to also effectively kill Rembrandt, as well. To return this character to the sniveling racist trope he used to be would be criminal.

And so he tells Diana— you screwed up. You made the wrong decision. And for once, the sad outcome of this episode is earned. There could have been a better way, and that way was actually non-involvement. You cannot decide that your own personal set of beliefs and prejudices are the be-all end-all way of the universe. Diana sees a poor dumb single mom dropout, when in fact her double is a warm and caring person. She’s fun, she’s full of life. She’s a good person who is trying her hardest with the shit hand she’s dealt. And all Diana can see is the poverty, the lack of education. It’s insulting, it’s wrong.

And this new show, this Traversers thing I’m talking about, understands that. This episode ends with Diana staring into a cup of mead looking completely gutted. It’s not an easy, storybook ending. This show is based on ridiculous things happening to people who have experienced things outside of human relation, but this ending, this entire episode, is based on something so, so relatable.

Which isn’t outside of what Sliders dealt with. After all, that was what Quinn’s entire arc was based on. But the difference was that his guilt was so self-centered, unchecked, and unimportant to the rest of the universe. It was a selfish guilt. And yet we were still asked to root for him. Here, we aren’t asked to root for Diana. We’re asked to pity her for her awful mistake.

It’s a tough gamble to introduce us to new characters and then immediately show them fucking up. But it’s worth that gamble. Despite her guilt, Rembrandt, in a final classic Sliders pep talk, tells Diana that she should remember one thing. 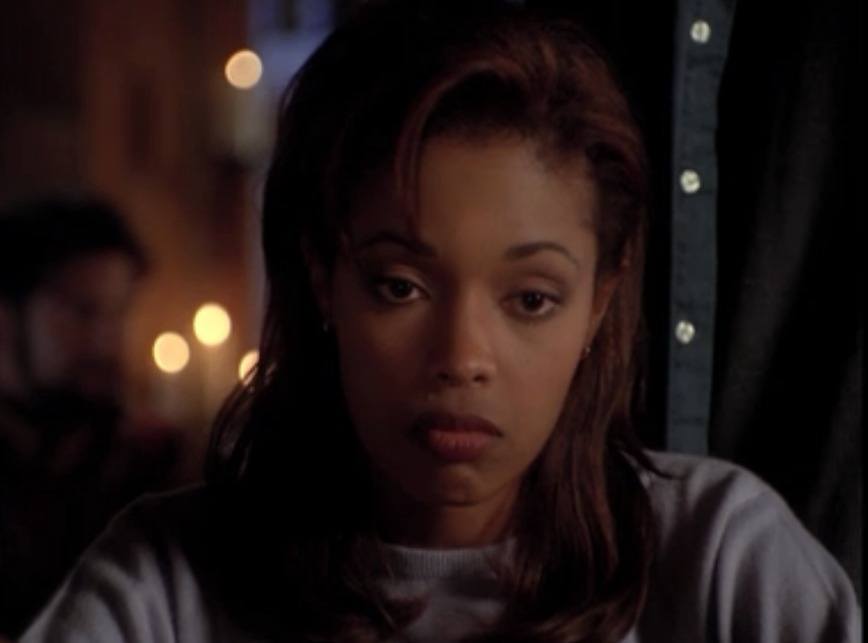 I mean, a really really bummed out team. But a team.

And so, in the last moments of this episode of Traversers that takes Sliders to task, a truce is made. Because one thing that was always present in the first two and a half seasons of Sliders was camaraderie. Was a family. Was love for the people around you. Here, with Rembrandt’s forgiveness, we have the beginnings of a new family, a new bond. There is a way for both shows to co-exist.

2 responses to “I Was Wrong. You Were Wrong. (Applied Physics)”