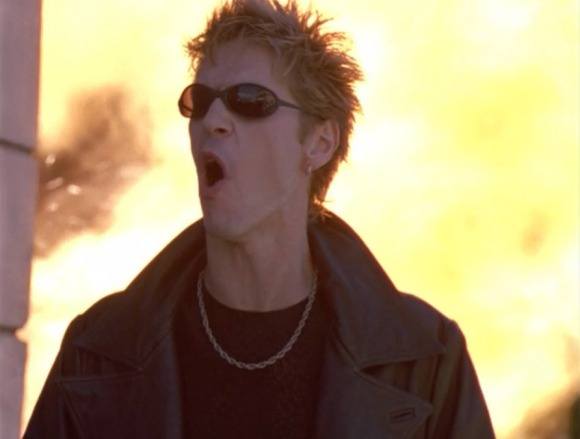 Last time, I made the semi-argument that we’d hit the moment where the show ceased to be Sliders. I don’t know what it’s become now, but it’s safe to say we’re still firmly in the “not Sliders” realm of storytelling. But there’s a crucial difference between “Stoker” and “The Breeder.” Namely, “Stoker” isn’t a total piece of shit.

Oh, don’t get me wrong. This episode totally blows.

It’s really, really bad. But it’s hilariously bad, and  at this point in the Season/Series, that kind of makes all the difference. Because just imagine trying to explain this episode to someone:

Yeah, there’s like, this vampire rock band— they used to be like, doowop or whatever, but now they’re like, shitty alt-goth or something— and they’re like, putting voodoo spells on chicks and then eating them, or something, and that one guy from That 70s Show that isn’t Fez, Ashton Kutcher, or Topher Grace (or the Dad) works for them, but I don’t think he’s a Vampire… I don’t know, he might be.

Oh yeah, and that Rickman dude dresses like a priest and hides his brain fluid syringe in a coffin-shaped hole he cut in a Bible. Oh, and apparently he dug up a dead dude who I guess just happened to share his name, but one of the pins off of his uniform in the coffin, and then reburied the dude— just in case Maggie decided to look up all the Dead Dudes in the World to check if the weird tattoo that lights up at death, find Rickman’s name, and then also dig up said Dude’s grave. Which, of course, she does. Oh, and Wade sings a tender ballad, puts on whiteface, crimps and teases her hair, and gets shitfaced on blood.

I almost want to leave it at that, because you kind of have to watch the episode to believe that shit. But you know I can’t just leave you with a bonkers synopsis (and a post under 1500 words :P). Especially since, against all odds, there’s actually some scenes that fit into the whole “end of the Sliding Friendship” theme that’s been going on this Season. 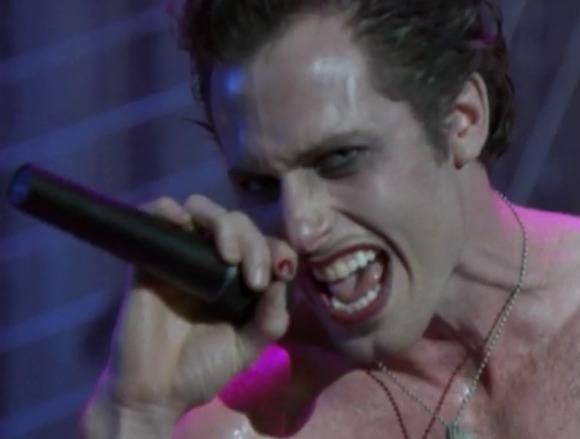 What, they couldn’t stunt-cast Scott Weiland in a bid for cross-promotion with “Tiny Music… Songs from the Vatican Gift Shop?”

So one of the fabulous things about this bizarre episode is that pretty much all of the action comes out because of Wade. This isn’t a Wade-Centric episode, per se, but it’s her who drives the plot. And it feeds from what’s been going on with her for the last few episodes in a surprisingly human way that hasn’t really had much time on this show. Wade’s really sad. Her life now is a boring ‘mission’ to ‘catch’ the guy who murdered her friend, but they rarely see him, and the only real reminder is a dour bitch yelling at her (the harshest words that will ever grace this blog, but I mean it to be from Wade’s point of view). Wade’s only human. We know this.

So I’m not surprised that her goal in this episode is to get shitfaced and maybe make out with a dude. It’s just her bad luck that she chose a Vampire to get busy with! 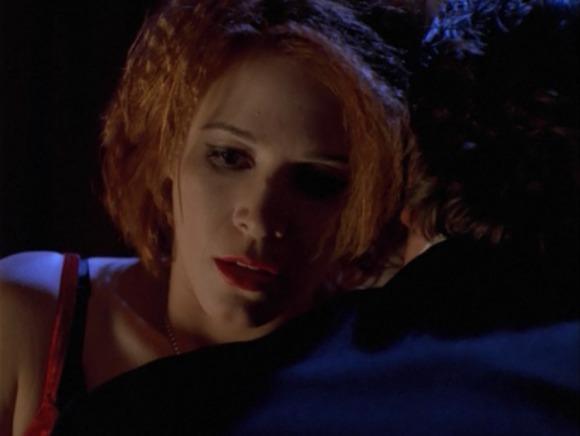 Okay, so Season 1 Wade makes out with a Sexy Revolutionary and the King of England. This season she’s had a Dull Robot and a Murderous Vampire. Hmm…

Okay, so lemme spoil this shit and tell you that all the Vampires die (actually not really, I think most of them actually live, so… good job, guys). After the lead singer/sucker dies, Wade expresses her extreme loneliness to Quinn. Honestly, quietly. And somehow, for some reason, Quinn accepts this loneliness with ease— not in the way we’d expect from him now. He doesn’t chew her out. Instead, he expresses shock that she could be so alone: after all, she has them, she has him. “Do I?” She asks, totally understandably.

To which Quinn replies “always.”

They’re crouched in the wreckage of their adventure, surrounded by the ridiculous ashes of a Vampire Farce, and they share a quiet moment, heads pressed together. Friendship somehow renewed. It’s a subtle and quiet maybe-ending to this whole ‘fractured group’ dynamic that’s been plaguing the show for weeks.

Somehow, the moment is tender. 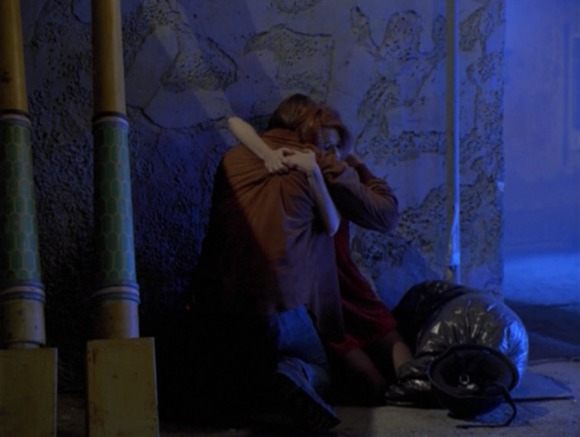 Now, though, let’s talk Writers. In particular, the way that a fan who is paying attention will either become excited when they see a ‘written by’ credit. In the case of The X-Files: “Vince Gilligan: oooh! Chris Carter: ehhhhh.” In the case of Doctor Who: “Robert Holmes: ooooh! Pip and Jane Baker: ehhhhh.” For Sliders, it was a little harder early on. It was more like “Jon Povill: ooooh, probably!” and “Tracy Tormé: yeah, maybe?” Every writer had equal hits and misses. In the 3rd Season, though, there’s a name that starts to pop up that spells a world of DOOM for any savvy fan. 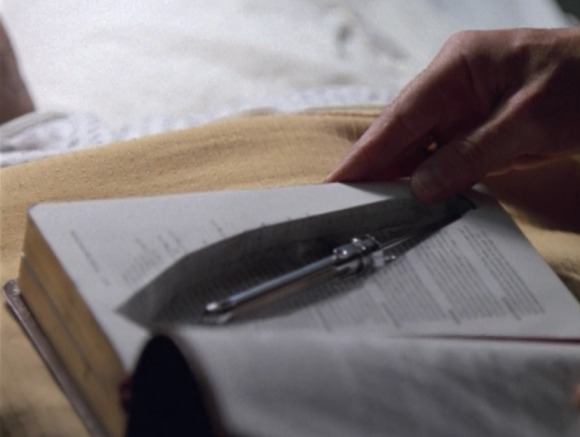 …if there are any savvy fans left…

Here we’re greeted with the name of Josef Anderson. And if we’re checking our alt.news.sliders or what-have-you— we’ll check what episodes this dude has written so far. First— he’s new to Season Three. So he’s one of the guys brought in by FOX. He’s also a Consulting Producer, so he’s got a say in the drive of the show. Now let’s look at what episodes he’s written— “Rules of the Game.” Okay, fine. Wasn’t so bad, but wasn’t the most original of concepts. “The Fire Within.” Bewildering dreck. “The Last of Eden.” Heavily indebted dreck. Then there’s his co-credit on “The Exodus, pt. II,” which leaves us to believe that he’s the guy that went in and ruined it. 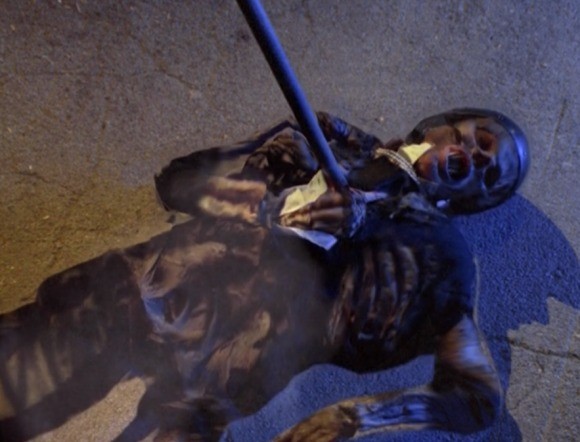 Do you think ol’ Joe Anderson woke up and was like “OH SHIT I HAVE A GREAT IDEA,” and then wrote this scene, SPECIFICALLY MENTIONING the fact that his HELMET AND CLOTHES MELT OFF as well as his skin? YES, I THINK HE DID.

Of course, while we’re looking at credits, and going ‘ehhhh,’ let’s not forget that none other than JERRY O’MOTHERFUCKING O’CONNELL directed this romp. And what does ol’ Jerry have to say about his debut?

Okay, that sounds awesome! I love NIN! What a great set of influences to draw from! I’m sure he succeeds in bringing German Expressionism to the small screen. Sliders could use more monochromaticism and influences from more art-house styles! 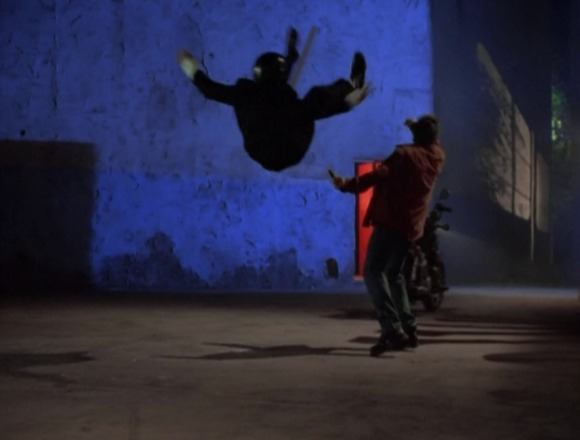 Motherfuckin’ Fellini up in this bitch.

Oh. Well, hey, I mean, good try though. It’s not like he gets bogged down in any really stupid shots or anything. 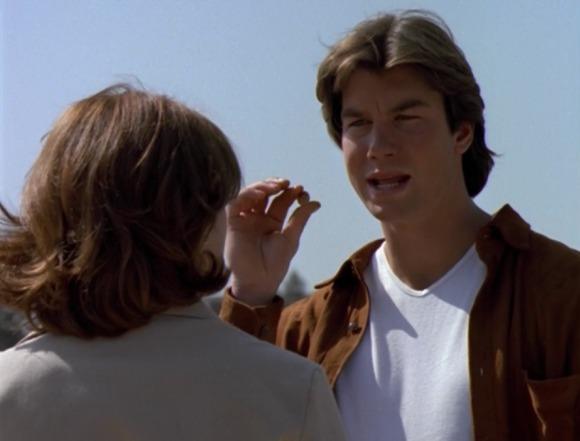 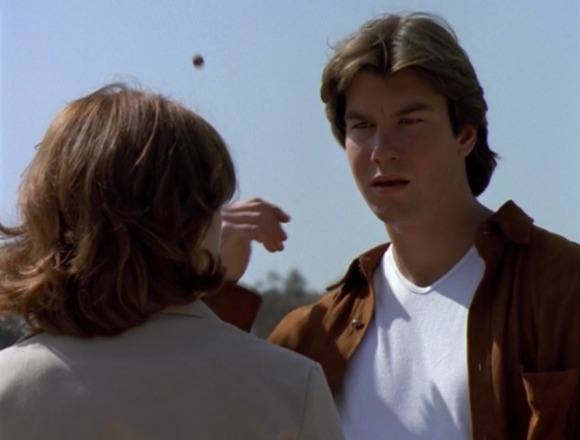 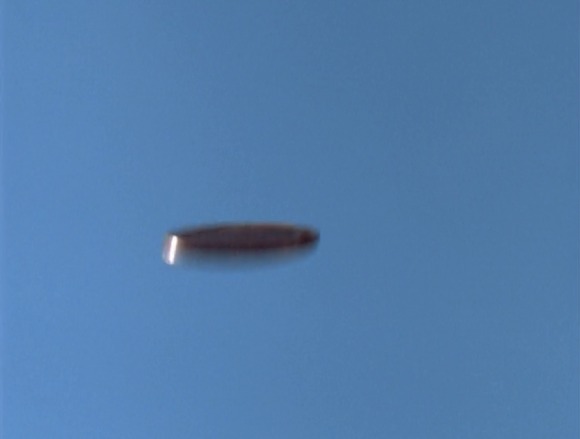 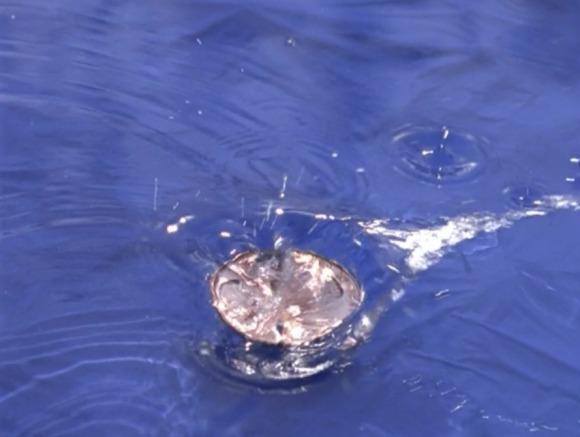 Oy vey. Okay, not only is this a Josef Anderson script, but Jerry O’Connell kind of really sucks at directing. Sliders has never really been a show that gives you a lot of well-remembered direction. I’m not sure I answer the question of “defining shot” of the show. Running up the street in silhouette, maybe? I guess so. And Season 3’s been a total mess, visually, but it’s always had a workmanlike charm to it. But man, that penny shot is BAAAD. And the whole thing is really clunky. Like in the Teaser, when the camera slowly zooms in to show Wade having a REALLY GOOD TIME at the Stoker show, Van Helsinger/Chong like, glides out of the way super awkwardly. It’s supposed to be dreamy, or weird, or I don’t know— it looks bad. It looks forced. It looks exactly like a film student had a good idea, tried it out, and kept it in even though it didn’t work the way he thought it would. Which basically is exactly what happened. 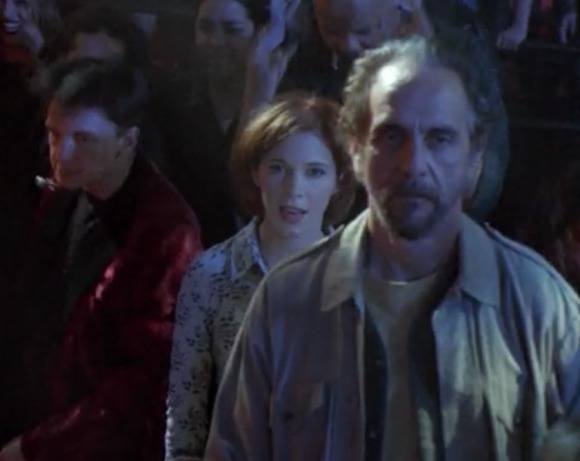 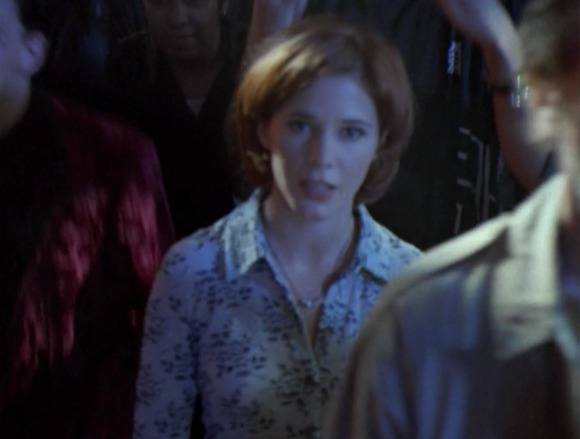 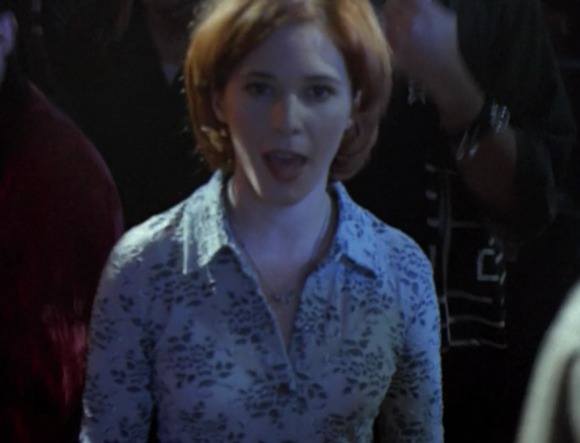 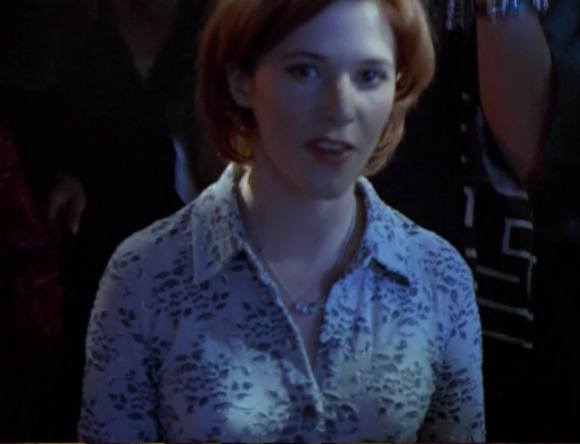 But also, who cares? We’ve already gone over Camp on this blog. But this is an entirely different beast. There’s a gleeful spirit to “Stoker” that the show hasn’t had in a while. And sure, it isn’t an intelligent hour of television. But there’s a communal spirit of “why not” to the hour that’s hard to resist. It’s as if the whole production team decided, “hey, why not— let Jerry have some fun,” and didn’t really worry about the outcome.

And of course, you can argue that ‘not worrying about the outcome’ is exactly what the show’s been doing for almost a year now. But the last few weeks have been relentlessly dire in their ‘anything goes’ attitude. “Stoker” is about a Vampire Rock Band that has a member of Guns ‘n Roses in it! It has a scene where Rembrandt gets shot with a lightning bolt out of a guitar! 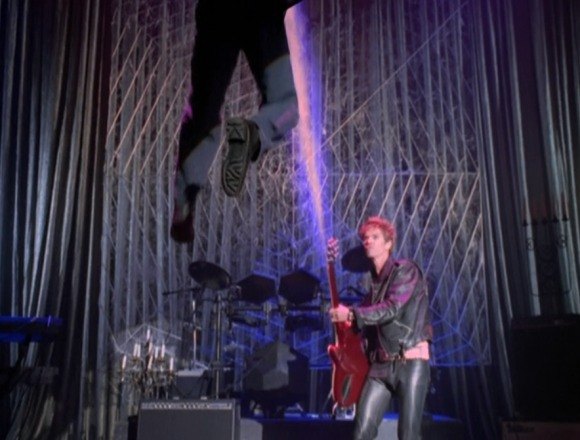 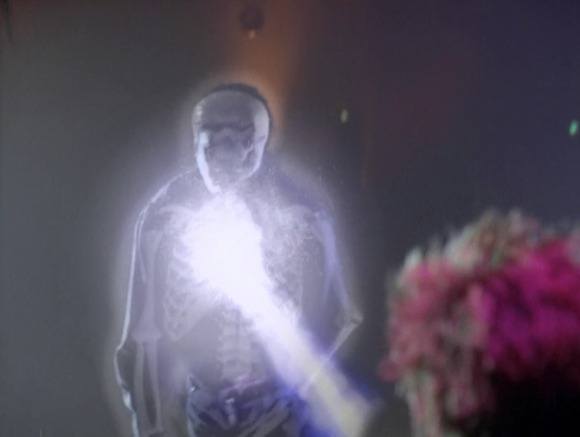 I mean, that’s so silly. But that’s awesome! When was the last time you watched Face/Off? Y’know, when John Travolta and Nicolas Cage trade …y’know, faces?

That scene is ridiculous! But why else are you watching it?

Look, I know that Sliders used to be intelligent speculative fiction interspersed with subversively dark humor. But the truth is, that’s just not what it is anymore. But we’re still here, we’re still watching whatever this goofy-ass show is. So why not enjoy it for what it is? Especially when it looks like the cast is having more fun than they have in months? 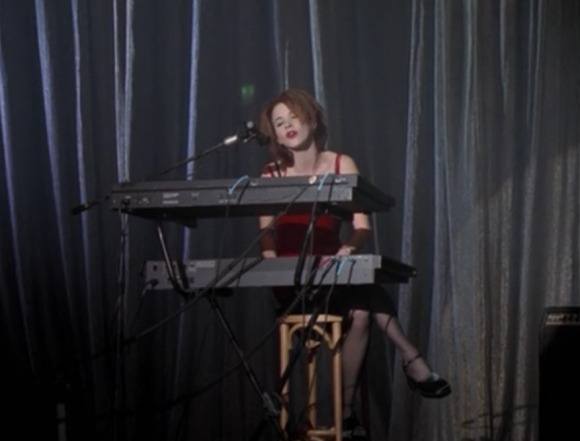 Girlfriend, I would buy your cassingle.

And, yes, that is Sabrina Lloyd singing. She’s got a pretty voice! Quinn says so, and it kind of reads like Jerry O’Connell is saying so, and Wade smiles her winning smile, and it seems like Sabrina Lloyd is actually appreciating the compliment. 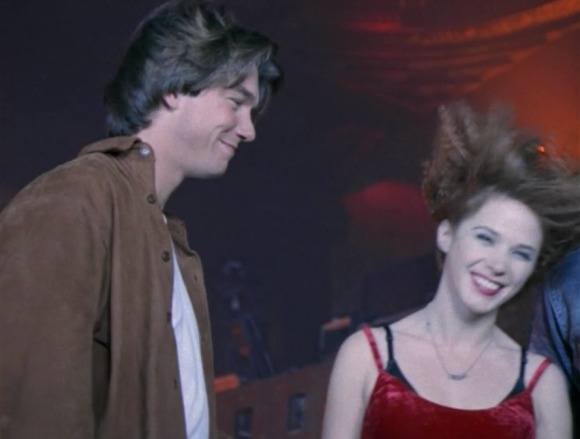 The graverobbing scene with Rembrandt and Maggie (who is still a total pain in the ass, but is also barely in the episode) is actually funny. And Maggie actually kind of deserves to be de-loused. 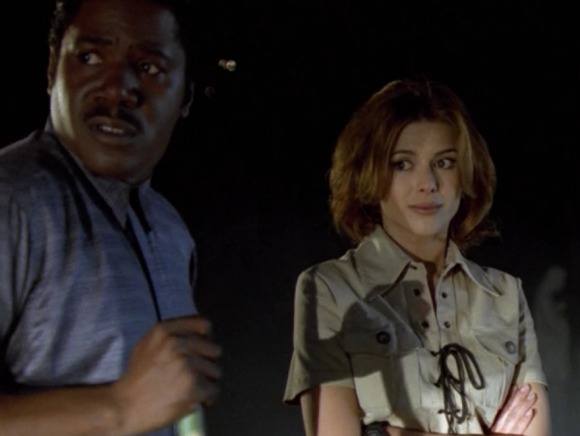 The first time I have not unquestioningly loathed Maggie ever.

It’s easy to take Harker’s word for it and say “that sucked.” Yeah, no shit it sucked. But you know what? I’d rather rewatch this than “The Breeder” or “The Fire Within” or “Desert Storm” or “Time Again & World.” Last week was when I said “this isn’t Sliders anymore.” But this week is when I say “well if you don’t like it, then don’t watch it.” 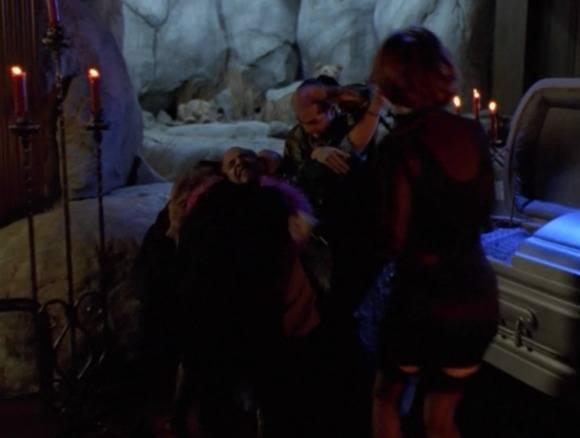 Man, Van Helsinger really went UP IN SMOKE, didn’t he?

Which is of course, the advice I wish I could follow myself when I watch next week’s episode.

Next Week: Why did it have to be Snakes? (Slither).