Those Who Dared To Reach
(The Return of Maggie Beckett). 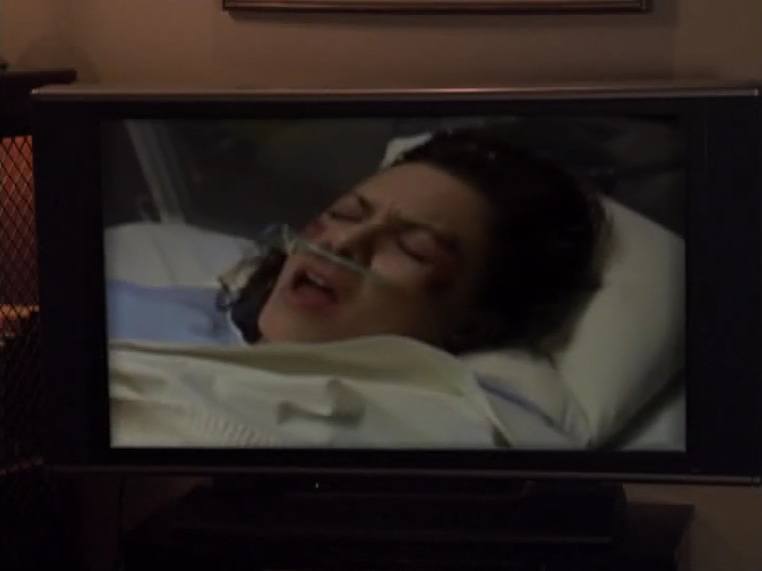 It’s funny, to watch this show wind down. I’m sure it wasn’t exactly thought of in that way— you certainly don’t get that sense from Damron’s Year Five Journal (instead, in this case, you get jealous whining about how his “space episode” didn’t get made). But Chris Black seems smart. He knew there was still more to be said about Maggie.

And bless him, he said it.

It should be no surprise that this episode is written by Black. There’s a dimension where he is the story editor, and I wish we lived in it. If there is any writer that draws a line from the beginning of the show to now, it’s Black. But here, instead of the one problem with “Applied Physics” (its complete reliance on an understanding of how Season Five works), we have a wonderful little piece that stands on its own.

Or, perhaps more importantly, it also draws on an entire thread of this show’s history. In a way, this episode is the final chapter of a long-running background story: the humanization of Maggie Beckett. It is perhaps obvious to point out that if Maggie had remained in her previous incarnation of “Season Three Bitch,” the show would have been unwatchable. But it is less obvious how much she’s really changed. It’s been so gradual that to watch “Sole Survivors” at this point would be jarring and unbelievable.

And it culminates in this, an episode that proves how much Maggie has improved as a person by showing us how she reacts to something from before we met her. 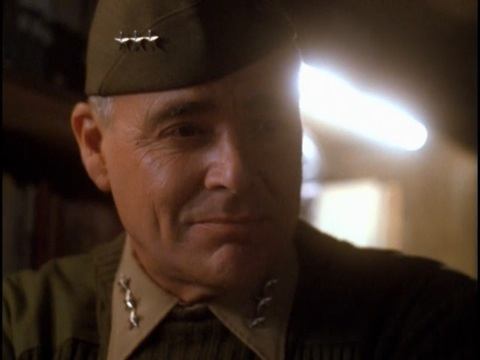 Maggie Beckett, suffice to say, is a divisive character. That’s not even speaking of her original character. It’s speaking of her existence on the show in general. Maggie is the purest symbol of “what went wrong,” of the end of the show we used to love. She’s John Rhys-Davies’ replacement, in theory. But really, that’s not exactly true. If anything, she was Sabrina Lloyd’s replacement, shoved in her face before they gave her the axe. It was cruel, it seemed unusual. She was harsh and unpleasant. The idea of “introduce a prickly new character” backfired spectacularly. So fuck her, right?

Well, no. Not really. For starters, it’s not fair to the Season Four Writing Staff, who did an amazing job turning Maggie into a person without having her seem like a different character. More importantly, it’s not fair to Kari Wuhrer, who has worked extremely hard to make this character believable. She’s improved phenomenally as an actress over the course of her time on this show. Just watch the “logical to the point of myopia” scene in “The Exodus” again. Then watch this episode. It’s incredible.

So I will tell you, not only because I have to, but because it’s just true— Maggie Beckett is great. She’s an important part of this show. At this point, even more than Rembrandt, she is the show. Rembrandt is a relic from a different show— he doesn’t really gel with this crowd anymore. But Maggie is the beginning of the show becoming what it is now. And yes, you can disagree with what that particular show is, but you can’t deny that Maggie is the most important part of it.

And if you give Kari Wuhrer more to do than action (which, ironically, she’s not really good at), she sings. She’s not perfect. But compared to say, Tembi Locke (sorry), she’s great.

The show, despite itself, knows this. And so we get episodes like “Slide by Wire,” which wrapped up her feelings for her husband. We get “Roads Taken,” which despite being a complete disaster, was at least an attempt to give Maggie a new bit of character to chew on. We get “Applied Physics,” which tries to build on that bit. And now we get this: a world where Maggie wasn’t a War Hero, but an Astronaut— just what she always wanted to be, but what her father never allowed. Loved by all, respected by all, feted by all on Earth. 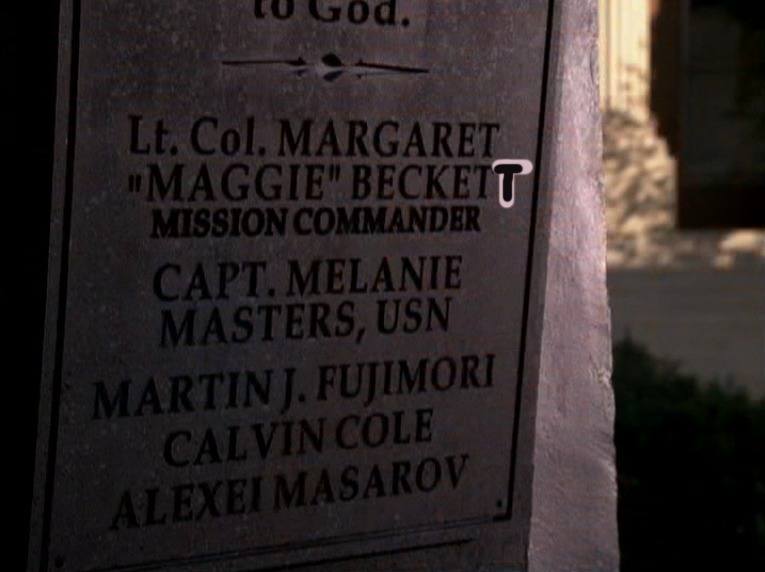 To twist the knife further, of course, she is caught and questioned by a double of her father. A specter of all that created the “original” Maggie in the first place. I’m sure the line long ago about Maggie always calling her father “The General” was a throwaway. But here it’s made manifest. And it’s very interesting to watch the way Maggie deals with it. By now, she should know better than to take this double of her father to task for all the ills she weathered in her childhood and beyond. But she does anyway, laying into this grieving man who may not even have committed the wrongs she claims.

Their scenes together are spent with the audience waiting for the ball to drop, for Maggie to stop and realize “oh, I’m sorry, you aren’t who I think you are.” But it never happens. Maggie knows it is a different person. But she continues her attack anyways. She has to. She realizes that she has been granted this opportunity to find some solace in this awful relationship that completely shaped her life, and she jumps on it.

And, more importantly, she finds that solace, too. She uncovers a conspiracy far more moving than any Evil Government could possibly be. She shows one flawed man how to be a little bit better. The world does not change. The government is not overthrown.

But she changes. Her sorrow, her bitterness, her pain— it is overthrown. The victory that Maggie is allowed in this episode, in a way, is the last bow of the character she used to be. Gone, now, are all the trappings of that bitter ex-marine. This character can stand on her own.

Now she is free. 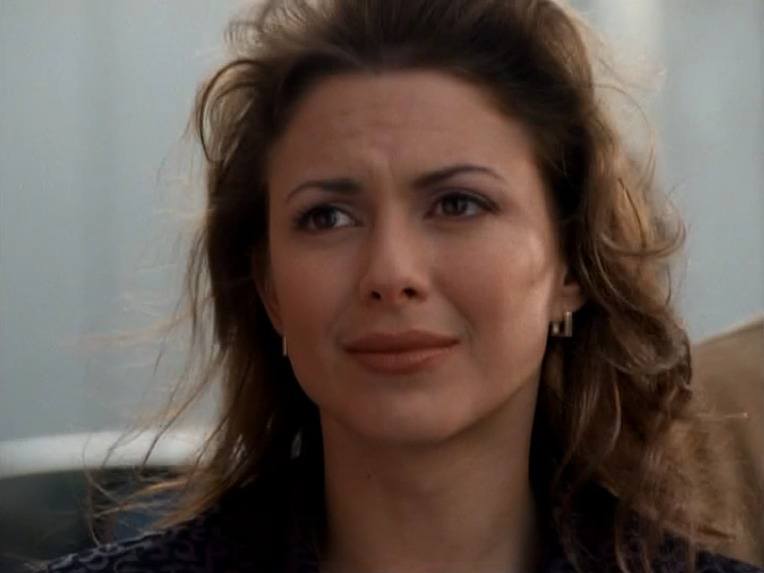 I caught both this scene, and a tear, in the corner of my eye.

I haven’t seen it before.

Maybe that’s not too surprising to some of you (though at this point I doubt it). But it is to me. I’m not sure what happened. I just missed it every time. Every marathon started either the episode after, or ended the episode before. I didn’t catch it when it aired. I never watched it once they added Season Five on Netflix. By that point, I was waiting for something. For this, I guess, though I had no plans of it at the time.

The more I think of the “show that used to be,” I find myself thinking of “Eggheads.” I’m not quite sure why. I still think that “Luck of the Draw” is a better episode. But “Eggheads” has something deeper going on. I think it’s how it approaches the “parallel dimension” part of the show— which, for all that this show is supposed to be about them, rarely deals with what that could really mean. “Eggheads” sticks with me because it shows a world that’s mostly the same as ours, if not slightly improved. But it shows that no matter what, people will still be shits in it.

I always felt that this part of “Eggheads” was the defining bit about Sliders. It’s not really saying that “everyone always will be a shit.” But it allows for the possibility. Arturo’s story in that episode shows an actual form of goodness that the sliders can enact upon the worlds they visit. Small, personal victories. When the “threat” is too grand, it’s impossible to become truly invested in them. I can’t really say “yes, English people are bad, let’s get rid of them.” But of course I can say “an adulterous windbag is a form of evil, let’s try to teach him a lesson.” Yes, what Arturo does in that episode is selfish—so, too, is what Maggie does in “The Return of Maggie Beckett.” 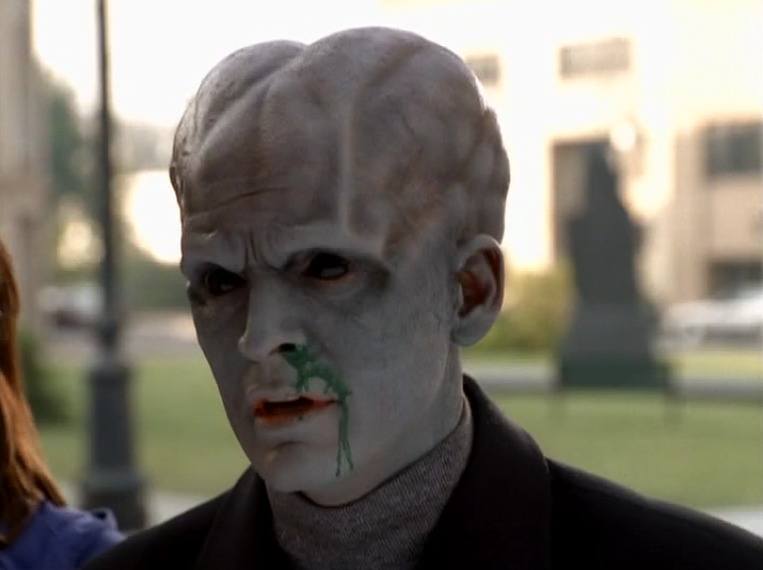 But it’s the perfect thing for this show to do.  Tiny victories inside ourselves. With that, it can be a source of hope in our lives. To visualize our demons and fight them.Cast them out. To overthrow our inner government. To be a force of change in us. Yes, preach “non-involvement.” Practice self-involvement. Not to the point where you are blind to the people in your life— then you end up with “Applied Physics.” But there is a beautiful middle ground to be won here. “Eggheads,” “World Killer,” and “The Return of Maggie Beckett” are wonderful examples of this approach to ‘sliding,’ to Sliders.

“Name me three episodes to watch.”