Until the Fat Lady closes the Book
(Eggheads). 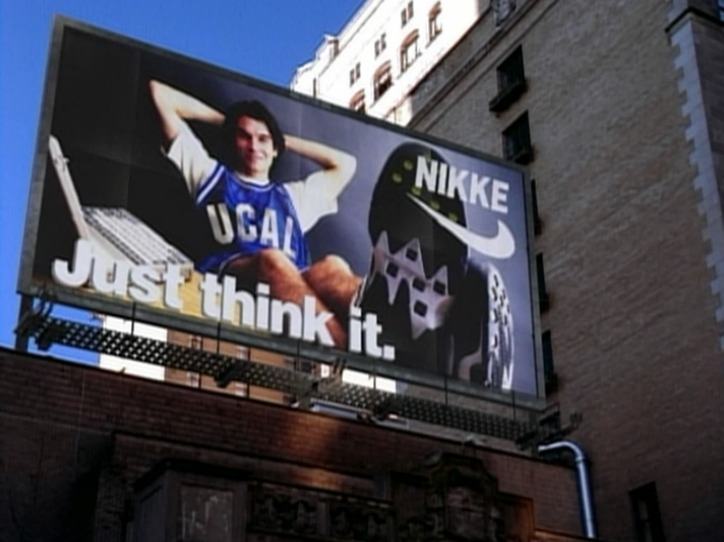 “Eggheads” has a moral— the first episode to actually have one. “Last Days” pretended it had one. It brushed against the surface of ‘the dangers of nuclear power,’ but chose instead to focus on the way impeding apocalypse effects us personally. Which is fine, there’s no  problem with that— Last Days was an episode full of heart, and besides, it’s early enough tin the show’s run that it’s a benefit to spend some downtime with the characters, to get to know who they really are. 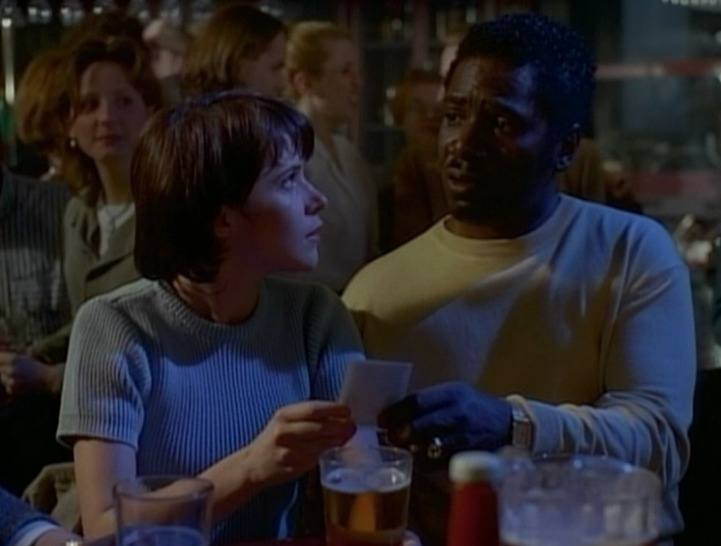 But back to morals. Egghead is a smart episode because it uses what has already become an easy convention on Sliders (slide into a world, laugh at the difference, get in trouble because of them, leave), and actually uses that as a way to enhance the store it’s trying to tell instead of just being lazy. 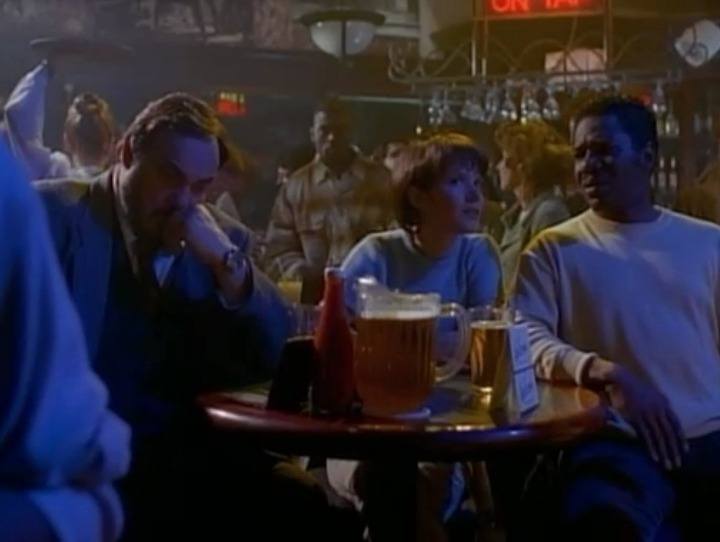 The bar ran out of peanuts. Arturo so sad.

It also helps that there’s added stakes at the beginning. Presented with the notion that Alt-Quinn & Alt-Turo of ‘smart world’ have slid off this world, Quinn’s sure that they can use his double’s equipment to repair the dope-ass cellphone and get HOME. I mean, sure, that’s the same thing he though he could do in “Last Days,” but no one was shouting “YOU DONE SLID” in his face then. 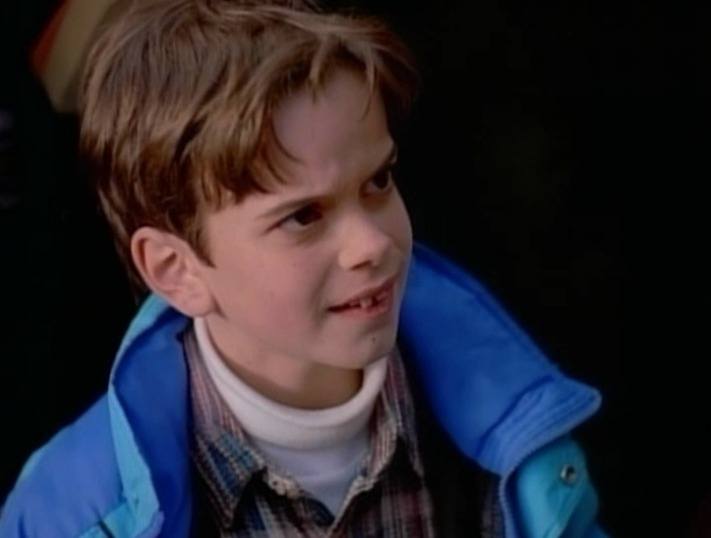 As the episode goes on, it becomes clearer and clearer that there’s no sliding machine. It’s not in Quinn’s basement, and it’s not at the university. Though there’s probably some sort of wide-reaching global conspiracy at foot, there: 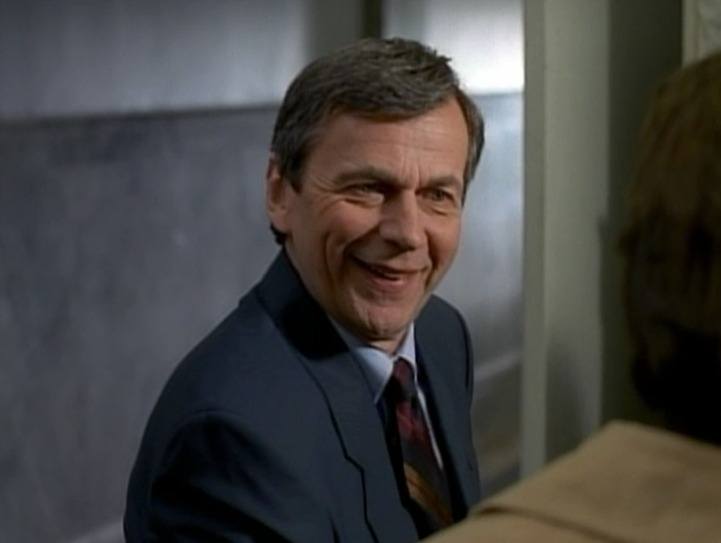 Anyways, the episode slowly builds (using the tried-and-true method of having Rembrandt shout the obvious out loud every five minutes) the notion that the All-American Alt-Quinn isn’t who he seems to be. He’s foreclosed his house! He’s having an Estate Sale! What’s the deal? Likewise, with Alt-Turo (but more on his plot later), he’s rich! A superstar! Adored by women! But here he is, faced with divorce! An ugly one, too: 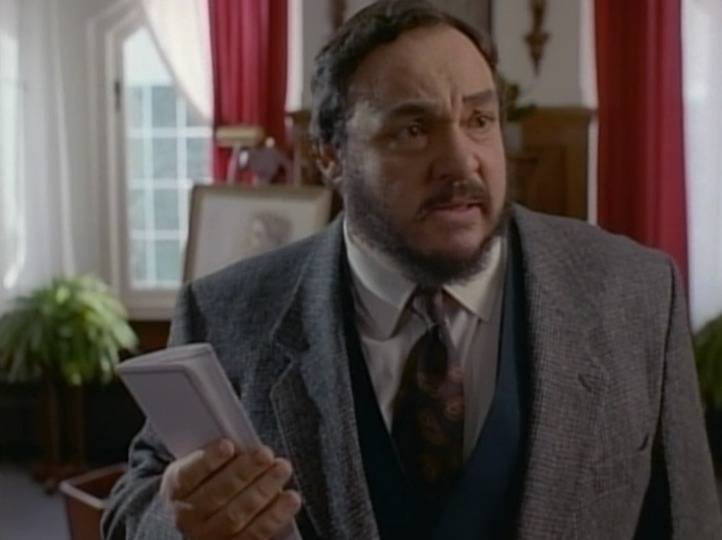 So by the time Quinn gets socked by a latin-spewing Angry Mob Guy, we’ve already sure: this world isn’t really that great. Arturo spells it out later for us, but it doesn’t diminish the grim truth: even though this world embraces gnosis, deifies the mind, digs brainy dudes, it still suffers from the same lack of a moral compass that our world does. In this case, it’s the similarities that are alienating, not the differences. And to be honest, that’s brilliant. The show too often presents itself as a corny action show, but when it puts it’s mind to it, it can make some great work about human nature. 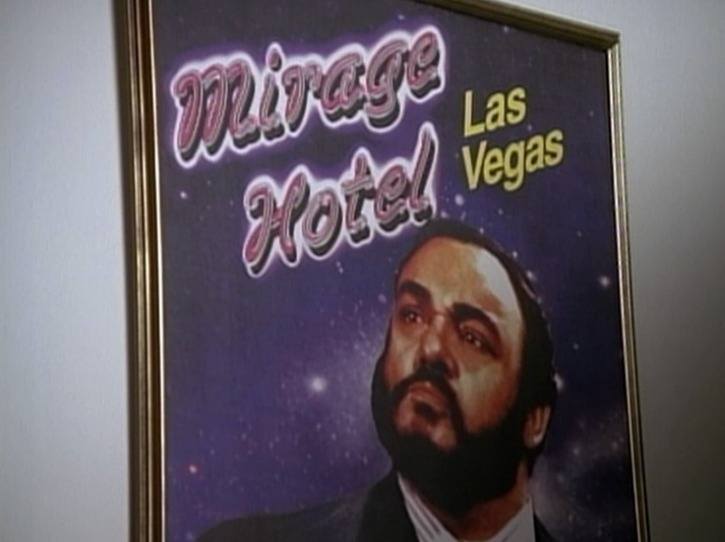 I mean, that’s what this show kind of has to be about if it’s going to respect it’s concept. We have people travelling to worlds that are dark mirrors of our own. It’s a much better idea to have there be no real lesson to learn than to hammer one like “communism is bad” or “monarchies tax too much.” “Fever”‘s strength came from the PENICILLIN plot, not the cartoon-evil CHC. And “Eggheads” is great, because the enemy is inherent to humanity. You can’t start a rebellion against the Human Condition! 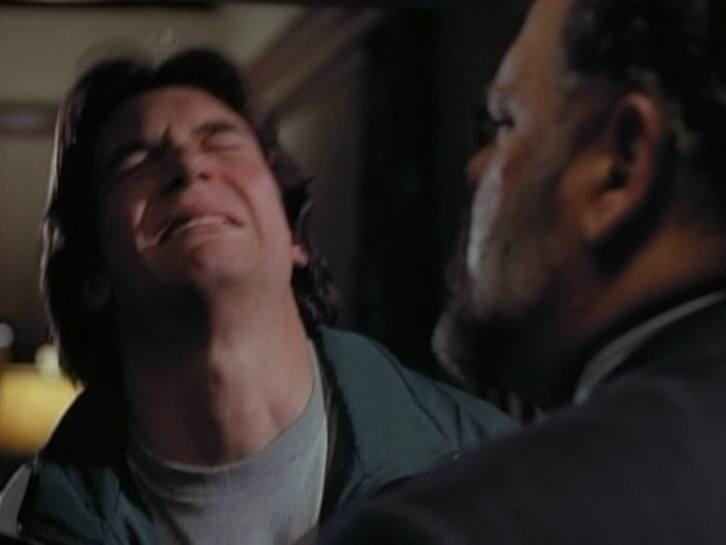 Won’t stop him from trying.

More kudos to the episode come from the fact that no one tries to change anything drastic about the status quo. There’ no governmental upheaval plot, because why should there be? Who would benefit from that? The fact that this word is pretty well- off and full of intelligence makes the fact that there’s still evil and corruption more biting. 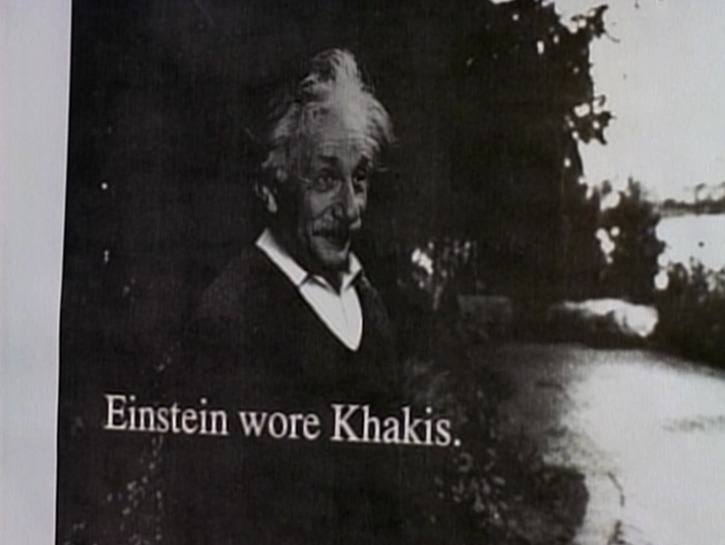 Capris in the Summer.

All that aside, the real star of this hour is Arturo. We’ve seen Remmy find an alt-ex-girlfriend (and we’ll see it again [and again]), but it’s the first time for Arturo, and it’s pretty amazing what happens. It almost seems out of character, as he becomes sullen and prone ot extremely flowery speech. See, on Our World, Arturo was hitched, but his wife died young of an aneurism. The episode takes lengths to show that Arturo’s pompous outer shell is really formed by a deep seeded pain. 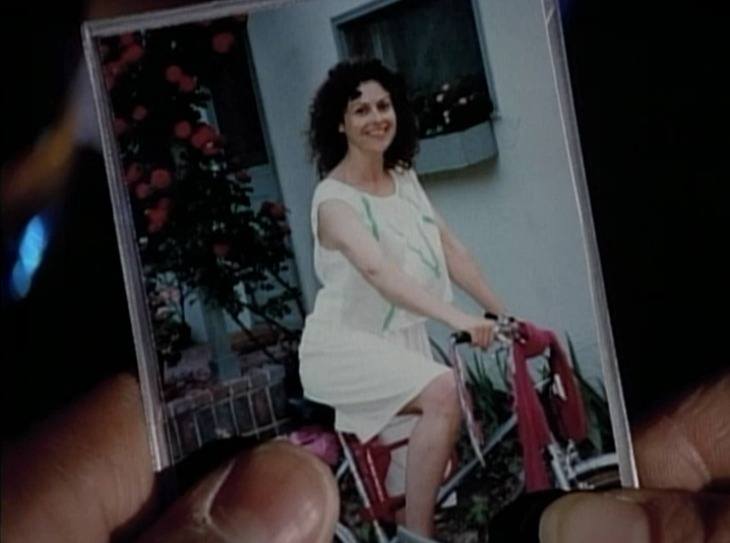 Can you imagine posing for this photo?

Arturo breaks all his rules about non-interference and ‘this isn’t our world’ to go try to save his slimy double’s marriage. It’s a weird version of Wade’s “I’m connected to all my doubles” thing she said in “Last Days.” Arturo is still so, so hurt by the death of his wife that he’ll even help out a total stranger— even one he knows is a philandering pig! It’s clear to him that if he saves his double’s marriage, a part of him will regain a part of his wife. Chilling stuff. 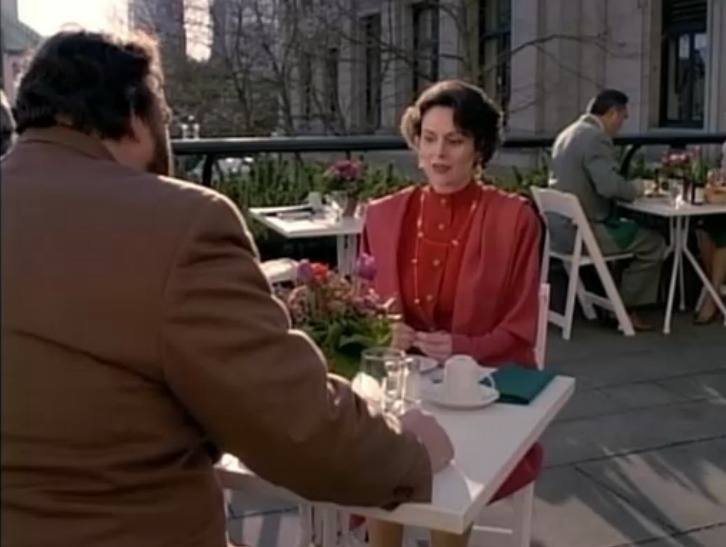 It’s tough stuff, but John Rhys-Davies is a total soldier through it. His final “hey asshole, get it together” tape he records for his double is pretty heartbreaking. 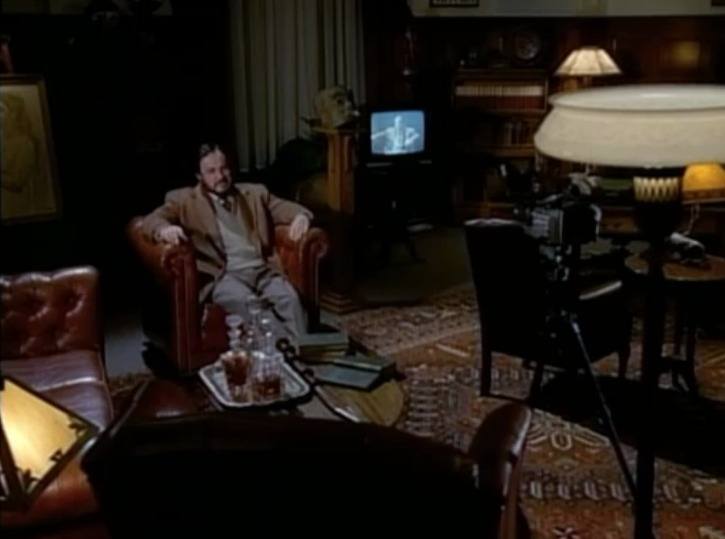 Why would he have a monitor of the tape he’s recording? And behind him, of all places.

And all this before we even get to the fact that for this episode they invented an olympic sport called MINDGAME! And it’s AWESOME! It’s like a mix of othello and like, football and dodgeball? Anyways, here’s the board: 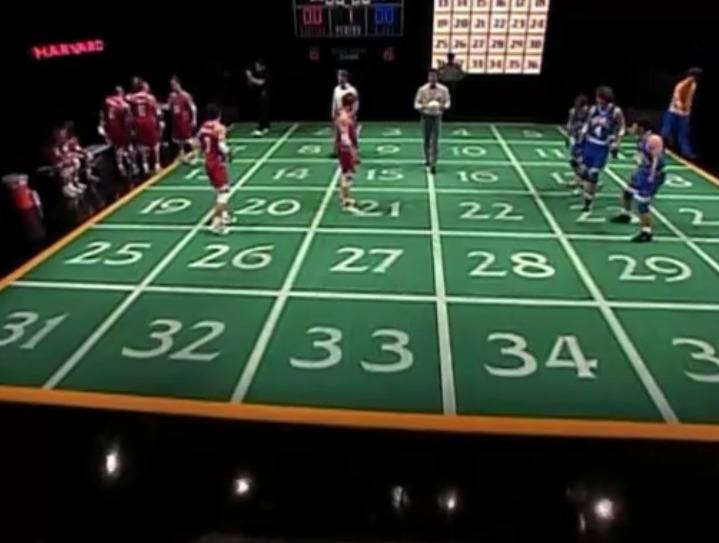 You’ve got to run around and get the ball to certain squares while reciting lists of science things, or reciting Pi to fourteen places. It’s a true marvel of television that they not only invented this game, but also made it work. They make it interesting, and not clunky, somehow natural. Like, I could believe that someone could play this game on our world. I’d also watch it, too. 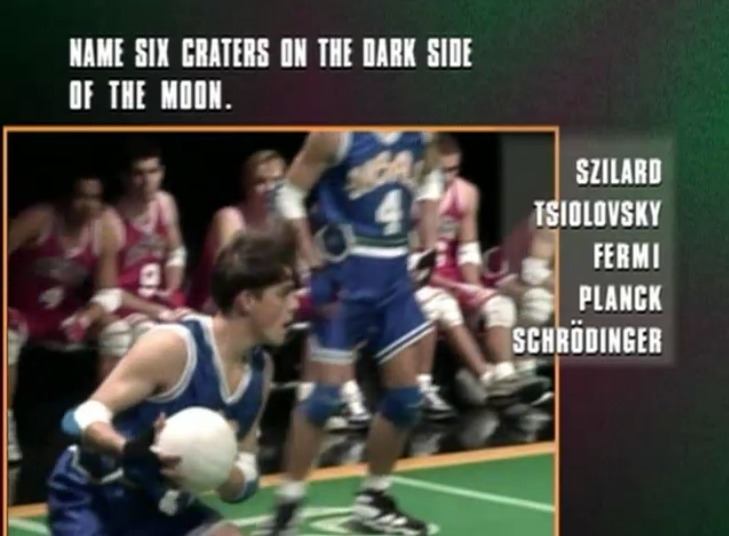 Great Gig in the Interdimension.

Of course, since this is Sliders, we have to have a chase scene to pad out the last ten minutes (couldn’t we have just had more Mindgame?). On the plus side, while they’re running, there is, for some reason, a huuuge bust of Albert Einstein: 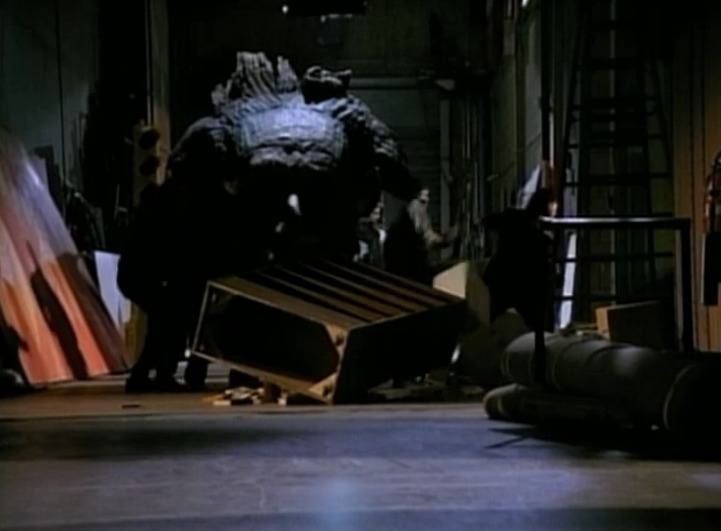 ZARDOZ SPEAKS TO YOU.

YEEAAAAAH! Then they get to the roof and Arturo shoots the vortex off the side of a building: 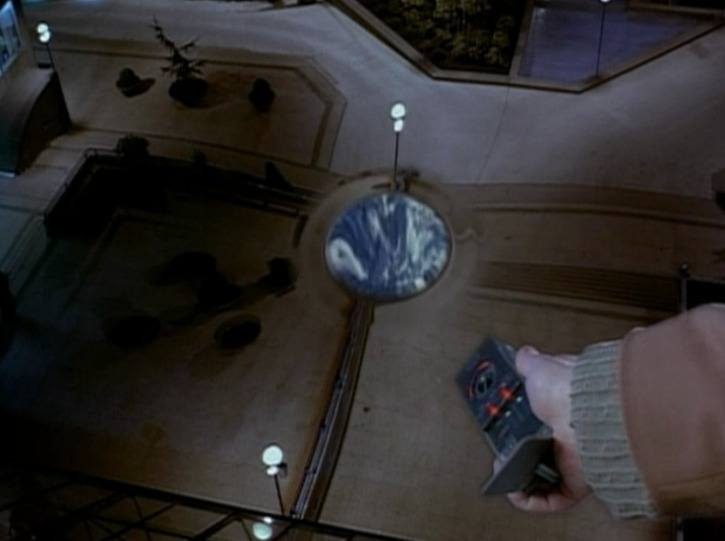 What? But they jump and somehow make it, because of course they do. Quinn gets one last brainy-quip by saying “so long, suckers” in Latin. Because I’m sure you can do that. 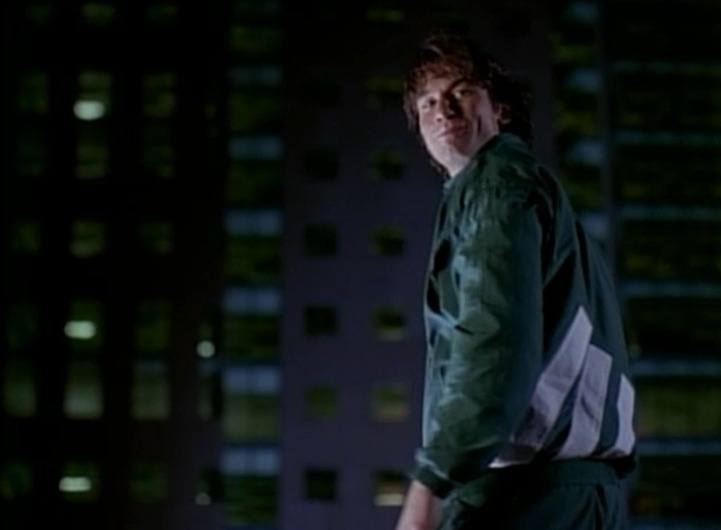 Return of the Son of Quinn’s Asshole Face.

Still, I’m just scratching at the surface of how good this episode is. I didn’t even cover the rap song by MC Poindexter! So 90s! So good! There’s a reference to Carl Sagan! Rembrandt bets against Quinn! There’s this: 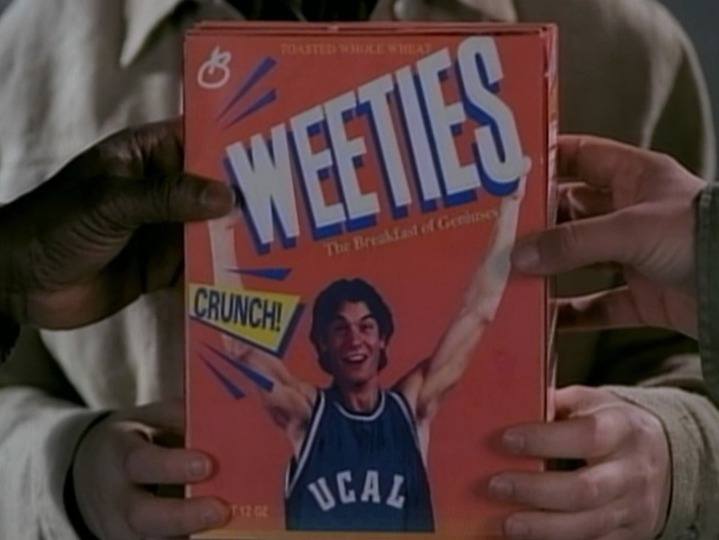 Is there anything bad about the episode? Well, sure, but it’s largely the same thing thats been wrong with every episode thus far: Wade & Rembrandt, and especially Wade. She gives advice now & then, and tries to be supportive, but other than that, she does her tried & true thing of sitting on a couch for most of the episode. When are we going to have a Wade-centric episode? “Last Days” made strides toward it, but at the end of the day, it reduced her to someone else who needs to make out. 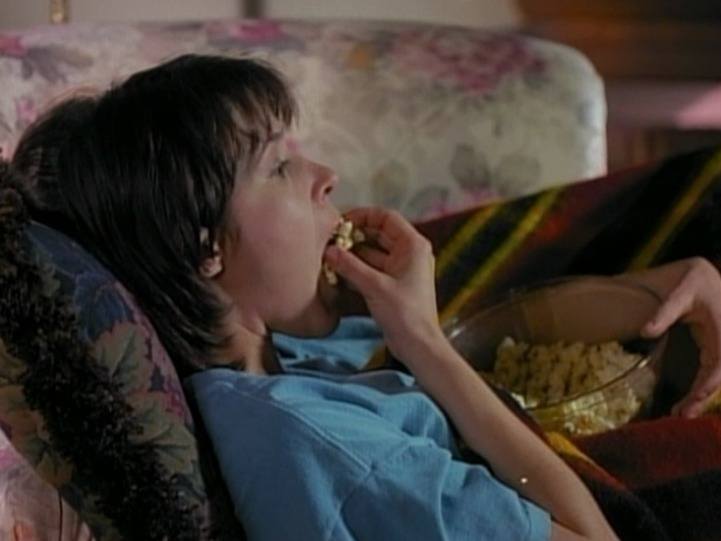 Celebrating the removal of her Braces.

And y’know what else is great about this epsiode? Maybe the greatest thing? No one made out with anyone!

Score one for decency. 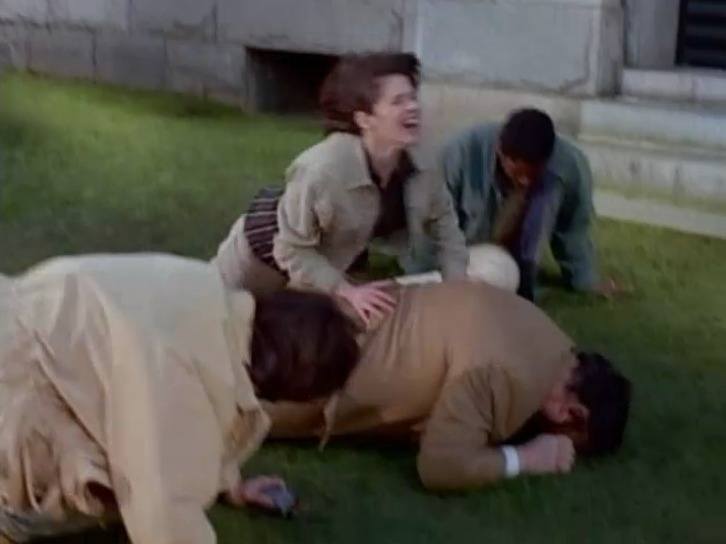 One response to “Until the Fat Lady closes the Book (Eggheads).”