What Needed To Be Done
(Slide by Wire). 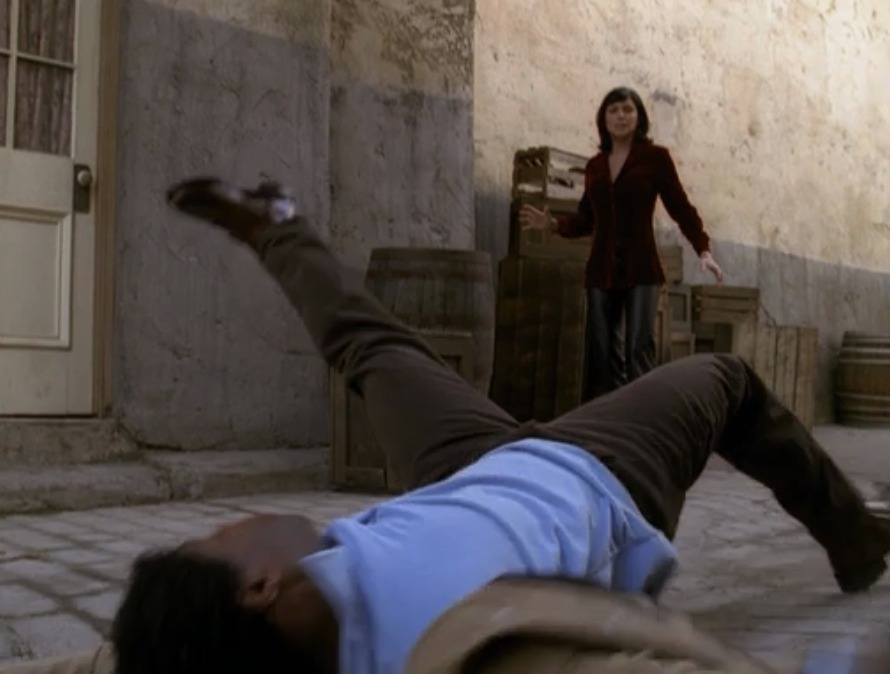 Why do we watch television?

Or, more to the point, why do we identify with television programs the way we do? Why do we create fan communities and message boards and conventions and long winded blogs that track themes of nihilism and pointlessness? All we are talking about is 40 minute bursts of energy, beamed through once and forgotten.

But they aren’t forgotten, are they? There’s the rub— our memories dictate our fandom. And of course, memory is inaccurate. It is clouded by time and forced misremembering. It’s a lie, but it’s an allowed lie.

“In business, as in love, a little hypocrisy is necessary to grease the wheels.”

Here’s the thing about television. It’s frankly amazing that it gets made. Think of all the bits and pieces that go into it. And not just writing, direction, acting. It’s amazing to get all these people in the same room, on the same page. It’s an amazing feat, all the people it takes to make an idea a reality. So you can’t fully fault Sliders for a few failed attempts (again, more allowed lies—of course you can fault it). Granted, at this point, the failures outweigh the successes.

But look, you can’t imagine the environment for making Sliders was very welcoming. It couldn’t have been easy to make the show. Warring production, overbearing networks. Firings, sass. Most likely, working on Sliders was probably the shittiest job you could have. So it’s amazing that everyone involved didn’t just throw up their hands and give up.

Obviously, that wouldn’t happen. But it wouldn’t happen because of checks— there was too much money invested, too many livelihoods on the line. Like John Rhys-Davies’. Like Sabrina Lloyd’s.

Man, I haven’t seen her in years. Crazy, isn’t it? So crazy, this business! You work with people for five years and then it’s over and you stop talking to them! Oh my god, I worked with that girl every day!

Worked with her, and then he didn’t. Because she was fired because of petty male bullshit. So it’s not only a morose work environment, it’s actively poisonous. We can gripe about Jerry O’Connell’s non-face all we want, but can we really blame him? Not really. Even with all the stories about his ‘drinking,’ the fact remains that he truly did have better places to be. It’s understandable that he’d check out.

The reason for the lengthy break is reality. My life was simultaneously imploding and exploding, improving and darkening in equal doses. It was hard, and heavy, and was a case of pure Real Life. I had to make my own fantasy. so I had no time for anyone else’s fantasy, especially the fantasy of a worsening television program I have to strain to remember. It was time for a break. I’m not sure it’s time to come back. But I owe it to you to do so, and I owe it to myself.

To be honest, I owe it to my childhood. When I reach “The Seer,” and I will, I’ll be closing a certain door forever. Sealing a final bit of innocence in a box and floating it down the river.

What is the point to all of this?

So I can now seamlessly segue into talking about “Slide By Wire,” an episode I watched over two months ago. I gave all the context above so that it means a little bit more when I say that “Slide By Wire” was a brilliant episode to leave on, to have as my last taste of Sliders for awhile. I expounded on the magic of Television because sometimes, no only is it amazing that people father and make something exist, but sometimes they have a total blast doing it.

Sliders, for more than a few weeks now, has been fumbling towards oblivion, tossing out warmed over bits of depressing trite bullshit all in the name of “science fiction.” So-called “big ideas” pass like gas in the night. Silent but deadly. Sound and Fury. Signifying Nothing.

And now, much like “The Prince of Slides” and “Seasons Greedings” in Season Three, “Slide by Wire” comes as the light past the tunnel. (The metaphor sticks— both the aforementioned episodes of S3 also seemed like the show was turning around, when really it was just the calm before the shitstorm). This episode is good. Finally. I don’t know if it’s so good because I’ve been watching so many bad episodes for so long. But that doesn’t matter— first, I’m pretty sure it would still be good anyways, and second, the simple act of being a shit-reprieve is good enough to warrant a heap of praise. So yes— this is a good episode.

But there’s more going on here than just “a good episode of Sliders.” It’s kind of an interesting episode of television. Which is an exciting thing to say— for a long time, Sliders has been so misguided that it feels like it’s operating outside of culture.

And that’s what sets “Slide By Wire” apart from the vast majority of season four. The whole season has been an exercise in sympathy, trying to feel sorry for everyone involved enough to be able to tolerate how depressed they look. 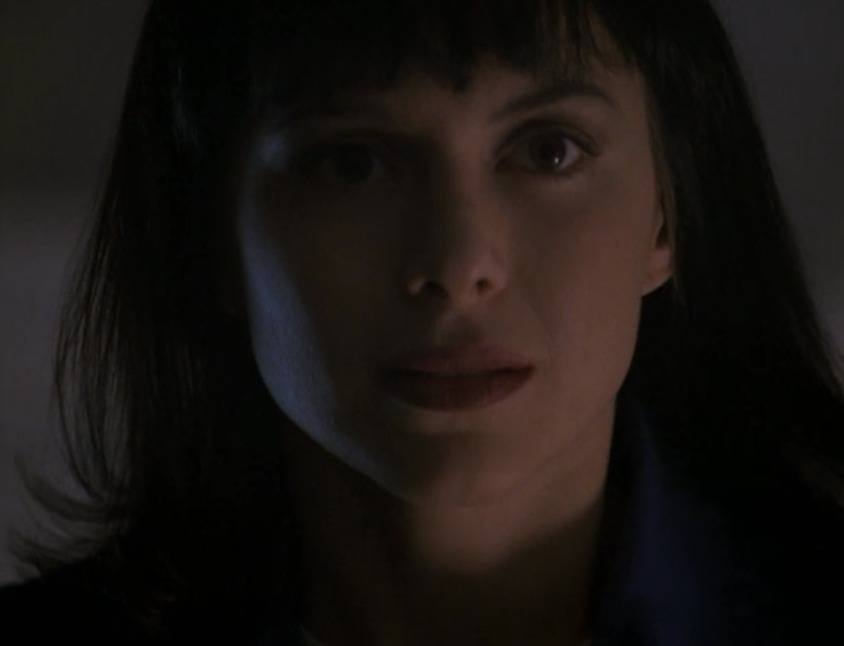 So when we get scenes where Kari Wuhrer actually has to try, it’s wildly refreshing. Not to mention the fact that the episode casually picks up on a plot line that’s been abandoned for a year, despite being the most interesting part about Maggie in the first place. Despite his recasting, it was vital to her character to run into Steven Jensen again. It’s not an interaction that lets us down. Kari sells the endless torrent of emotions. 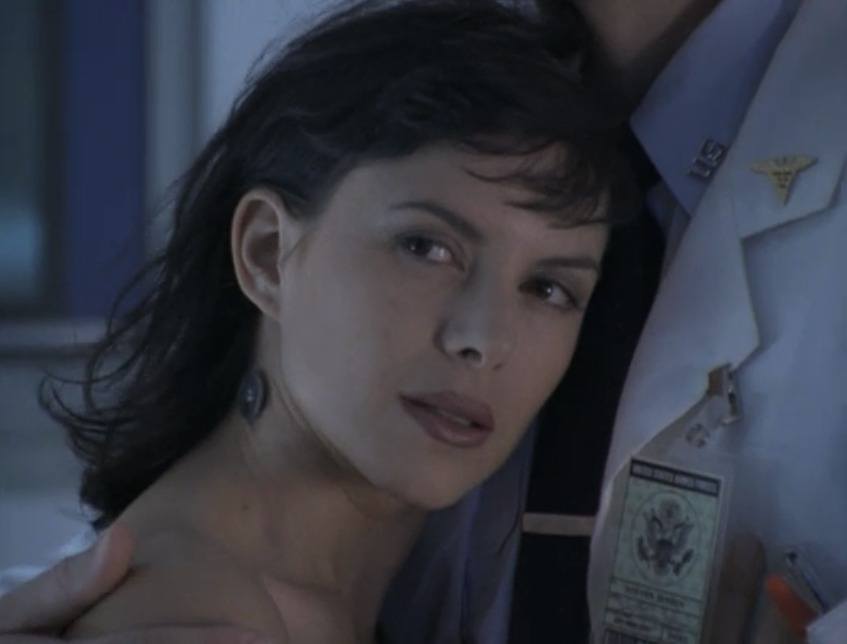 Next, on The Bold & The Beautiful…

She also gets to play a double who isn’t a total strumpet. Oh, sure, she tries to make out with Quinn, but those scenes are all based in character ideas. Alt-Maggie hasn’t had the ability to live in forever. Quinn certainly is at least attracted to Maggie, but he’s still hesitant to do anything about that— there’s too much at stake, now. But what’s striking about this interplay is that we’re allowed to see it at all. It’s been since “Asylum” that we’ve spent anytime at all thinking about any of our characters’ headspaces. We were due for a check-in. 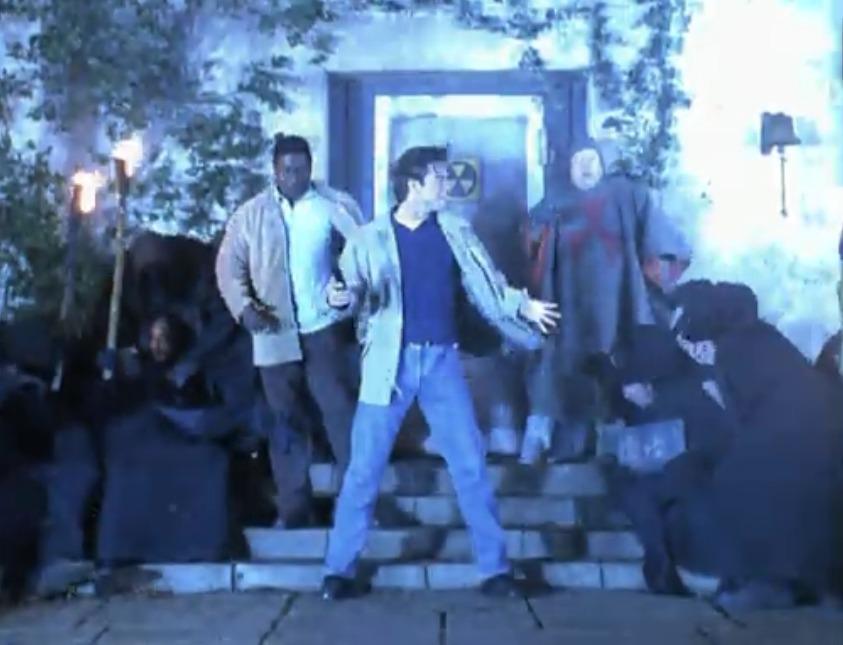 TURN TO THE LEFT!

And, like I said, everyone is having fun. Quinn’s “Buttery Goodness” scene may be preposterous, but fuck if it isn’t hilarious. And maybe that’s inadvertent, but at this point, does it matter? You can sense that everyone is trying not to crack the fuck up while Jerry O’Connell takes this already bizarre set of lines and pushes them to the very limits of seriousness. Plus, it’s actually a genuinely “Quinn” moment, something that’s been bizarrely absent from the show recently. This scene is an odd parallel to the rallying scene in “Prince of Wails.” He’s just talking about Butter instead of Revolution.

At this point, we can’t ask for much from Sliders. We have to ask more of ourselves to enjoy it, to forget all that’s built around it, to will ourselves to believe that the majority of the show doesn’t exist so we can have our fairyland of the first season. That’s our accepted lie— that Sliders is a good show. It’s not. It might have never been. But moments like “Slide By Wire” can put that lie to the side. They’re fun enough and dip just a little deeper into the emotional well that the show used to. It’s a reminder that there is a reason why we watched this in the first place. And it has a scene where Alt-Maggie punches a door into oblivion, then calls it a bitch.

It’s not perfect, but it’s enough.

Next Week: and the pendulum swings back (Data World).

3 responses to “What Needed To Be Done (Slide by Wire).”