Initially a world with a powerful sect of "Dream Masters," this dimension has fallen prey to the Kromagg Dynasty. 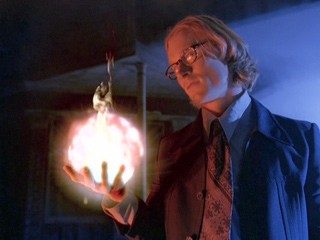 After discovering the remains of another Kromagg-conquered civilization, MultiDim scientists did their best to research that world’s history before detection.

After poring over contemporary periodicals that survived the devastation, we suppressed our laughter and reported the following:

In 1991, Vincent Cardoza, an unconventional university researcher at the University of California, Los Angeles, unlocked the key to dream manipulation using various psychotropic drugs. Using these drugs along with a form of hypnosis allowed so-called “Dream Masters” to attack someone mentally. The process was banned and its followers outcast.

The Dream Masters plagued the west side of Los Angeles for about five years until their skills were thwarted by the simple fact that a dream actually can’t hurt you. The whole phenomenon never really made much of a dent globally; the only mention found in magazines and newspapers was a refutation of the story in Marilyn vos Savant’s column in Parade. Urban legend sources laughed at it, as should you.

Regardless, the world was conquered in 1998 by the Kromaggs. It’s speculated that the Dream Masters themselves were carted off by their new masters to work as living torture devices. We’re not about to pursue that line of questioning with much vigor, however.

One last thing: the money we found on this world was made of zinc. Maybe you can suck on them to prevent a cold.

The Kromaggs have conquered this world. It's been quarantined for a reason. Do not attempt to visit Kromagg Outpost 153. The Kromaggs track wormholes quite easily, and we don't want a fleet of Manta ships conquering our world. Thank you.

Return to the full list of worlds we've chronicled for Multidim.