It had been a grueling season. I was nearly at wits end and was ready to snap. One can’t begin to adequately describe the pressure cooker I was immersed in. It was intolerable. I never want to deal with that situation or that level of incompetence again. Thank God it was over.

As the Boeing 757 finally took to the air I looked back at the snowy Detroit Metropolitan Airport, happy to leave the debacle behind me. I took in a lung full of recycled air and tried to relax the tense line of square knots that now passed as my spinal cord. After two days of being snowed-in at the airport and an unending stream of flight cancellations our Christmas from Hell was over. I was ready to get back to sunny Southern California and definitely couldn’t wait to get back to work. 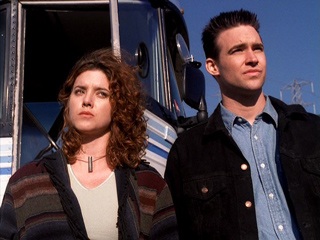 Upon my return I learned that not everyone was as lucky as my wife and I. As it turned out Chris and his wife Penny were still stuck back in the mid-west. Being from the Detroit area I had relatively easy access to the airport. But Chris is from Ohio and when the blizzard blew in he elected to sit tight, deciding not to take the treacherous drive up to the airport in Michigan. It would be another day before we would see him. The time was ripe to make Chris ground zero for a practical joke.

First thing to go was Chris’ parking space. The name sign was pulled and the space left vacant. That was too easy to see through though and we had disturbed Chris’ spot before. We really needed to mess with his mind in a heavy duty fashion. Someone managed to dig up the parking sign of a former Sliders producer and planted it in Chris’ space. The nameplate of that same former producer was also attached to Chris’ door. The next day he returned to find another car and sign on his parking place. He was livid and actually somewhat concerned. The idea that in Hollywood you can be in one day and out the next is no myth. Things started to fall into place for him when he entered his office and found it intact. Bill and I let out a chuckle or two at his expense and Chris well, he just let out a sigh of relief. 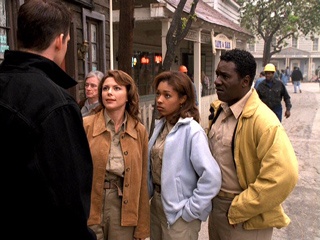 Antagonizing fellow staff members is and should always be part of any show’s standard operating procedure. It’s right up there with office water cooler conversation and photocopying one’s bare buttocks. My personal favorite happened during a casting session for an episode that was to be directed by Paul Cajero. We were looking for a good female villain and had a number of strong contenders that we needed to look at. Unknown to Paul, we also had ringer in the bunch and he was the target.

A typical casting session or audition usually involves, at a minimal level, the episode’s producer, executive producer and director. The casting director, in advance, is given the character descriptions and then assembles a number of actors who he/she feels might be right for the part. One by one the actors enter the room to perform for the staff a few lines or pages that have been pre-selected for them from the episode they’re auditioning for. It’s a fairly de-humanizing nerve wrenching trial for the actor (I’ve had some experience in this area). They are usually expected to deliver brilliance under the crudest of conditions for an audience of three or four who will pass judgement on their abilities based on how they deliver a meager handful of lines. For this reason I admire actors. Their profession is not for the weak of heart. 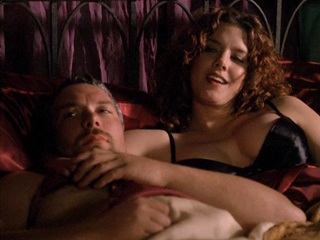 On this day, for the gag, we decided to bring to the audition someone known to us with the understanding that they were to give their worst performance ever. She did. No question, this was one of the worst performances I had ever seen in my life. This woman, under normal circumstances, would not have had a chance in hell of getting this part. However, these were not normal circumstances. Myself, Bill and Barbara Claman, our casting director, all unanimously agreed hands down that this woman should get the role. Bill had the final word on this. Then we sat back and watched poor Paul squirm. After all, this was to be HIS episode. Naturally he wanted everything to be perfect, including whatever actors we selected. How could we do this to him? Indeed, one of the nicest people you’ll ever want to meet, Paul is one of those guys who never seems to have a harsh word for anyone or anything. Which made watching him squirm that much more delightful. He struggled to find a rationale for our reasoning and garnered no satisfaction. He decided to take the issue to David, who was also in on the joke. He simply rubber-stamped Bill’s “decision.” Finally we confessed to Paul our transgression — that we were only pulling his leg. As expected, he took it all in good humor. 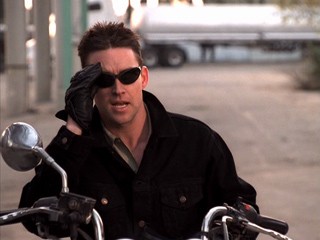 By the time Chris and I both settled in after our return from Christmas vacation, the production of Easy Slider was half over. This episode, directed by David Peckinpah, combined several location days out in the desert with the remainder being shot predominantly on the backlot. Some of our more astute viewers may recognize the village of Cabot Cove from the series Murder, She Wrote being used as the company town. The generic Mexican village, also located on the backlot, served as the biker hideout. “Easy Slider” seemed to rely almost exclusively on pre-existing structures and properties… even down to the biker gang. Our gang was a real group of bikers. Some of them were actually associates of David’s. At the time he had a growing interest in Harleys and would eventually go on to buy one after production had concluded.